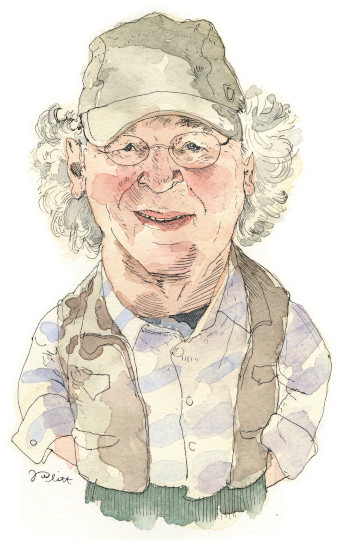 It was Phillip Ross’s turn to move people, to bedazzle them, through his art.

The year was 2014. Ross had essentially executed the visions of others, namely bosses and clients, as a graphic designer or as an art director or as a creative director for 40 years. When he wasn’t following orders, he was collaborating with two others … or four others … just pick a number.

In 1970 he started turning in assignments to his superiors as a graphic designer at a community college in Monterey, California. Those Utah photo shoots, in spectacular settings?

Ross worked with world-class photographers and directed them for Marlboro ads during his time at Leo Burnett in the 1990s. His award-winning studio, Beda Ross Design, created posters and logos and hand lettering for cultural and fine arts organizations.

Then, 2014 arrived. Phillip Ross’s new title: semi-retiree. But the longtime Lake Bluff resident threw himself, full-time, into his passion for fine art photography and is stuck in constant-hurtle mode.

Many of his captivating photographs are of flowers and plants, with most of the images out of focus, save for a speck that’s in super focus. A soft photo appears softer, thanks to the technique. Ross’s “Healing Touch” photo spotlights the arresting violet and splendid blues of a hydrangea.

“That photo, I feel, embodies my sense of style,” Ross says. “Someone came up to me recently and said, ‘Oh, you’re the one who likes out-of-focus flowers.’ I’m that guy. I’m mostly interested in color and composition. I believe soft images, particularly of flowers and plants, give people relief from everyday chaos.

“They have healing properties,” he adds.

Inhabitants in the pandemic-marred world, it seemed, all could’ve used a salve in 2020. People suffered on a number of fronts, from failing health (physically and mentally) to loss of income to disruptions in education. Businesses closed, including some in Lake Forest’s Market Square.

Artists? They created, created, and created—at home. But their opportunities to showcase their artwork melted, melted, and melted.

Lake Forest Art Pop to the rescue. The unique pop-up gallery in downtown Lake Forest was hatched last year by three local artist organizations: Artists on the Bluff; the Deerpath Art League; and the Lake Forest-Lake Bluff Artisan Guild. Why not, with permission from landlords, stage art in empty retail spaces? Art—paintings, photography, jewelry, millinery, and other forms—certainly blows away the dreary look of brown paper covering a storefront window.

Art from a range of local artists—coordinated by Ross—got displayed. Passersby stopped. Passersby bought art. Lake Forest Art Pop has moved to 724 Western Avenue, where it hopes to host themed shows each month until the end of 2021.

“It was well-received from the start, and we truly appreciated the full support of the Lake Forest/Lake Bluff Chamber of Commerce and (its executive director) Joanna Rolek,” says Ross, who has lived in Lake Bluff for 37 years with his wife, Frania, a native of Germany. “Our first three months, we sold about $30,000 of artwork , much more than anyone had expected. Such generous people, the local residents. Wonderful hearts. They were thrilled to return to the shops, once they reopened.

“What I think happened was, people were stuck inside for so long that when they saw our artwork in the windows, they knew exactly where they wanted to put it in their homes.”

Ross was born in Oak Park and moved to Elmhurst in the fourth grade. He served as sports editor of York High School’s yearbook for two years, choosing—instead of shooting—the best photographs. He tried out for the wrestling team one winter and was told he’d make the squad if he defeated a certain returning Duke grappler.

“I didn’t make the team,” Ross says. Ross attended the University of Illinois for a couple of years, studying pre-law. He also toured the country for a couple of years, mostly during the summers, as an electric bass player for a rock group named The Buffum Tool Company. Remember the Summer of Love in San Francisco’s Haight-Asbury neighborhood?

Ross does. He and his band mates performed there.

Ross, an Army veteran, bought his first camera, a Mamiya Sekor 35 mm SLR, in Japan in 1969, while on an R&R from Vietnam. Most of his shots were of the scenic variety. Years later, while traveling Europe, he snapped 8,000 photos, maybe more.

His enrollment at the Chicago Academy of Fine Art to study interior design, drawing, and painting vaulted him to a slew of highly successful stints from 1970 to 2014. His move from Los Angeles to Chicago in 1975 preceded his time as an art director in charge of designing pinball games for major pinball companies Bally and Chicago Coin, among others.

Freelance gigs ensued. Next? The formation of Beda Ross Design with co-workers Lynn and Dale Beda. The trio collected more than a few awards in the “BC” Era (“Before Computers,” Ross cracks), including recognition from such publications as Communication Arts, Print Magazine, the Art Directors Club of Los Angeles, Typographers International Association, and Time.

Ross can’t wait to take 8,000 more shots in Europe someday. But he’ll settle for being the busiest semi-retiree stateside. He has photos to take, exhibits to organize, and boards to serve—Artists on the Bluff; the Lake Bluff History Museum; and the Deerpath Art League. Plus he’s a member of the Chicago Photographic Arts Society and the Chicago Botanic Garden.

“There’s nothing like having the time to pursue my personal art,” Ross says. “I find the entire process of creating art fulfilling. And when it’s sold?