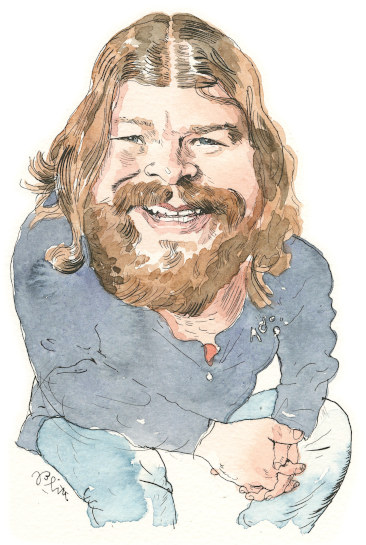 The compliment that changed Jonathon Sawyer’s life was as ringing as a dull thud. Sawyer was an engineering major at the University of Dayton, midway through his junior year, and working part-time for a hard-to-please chef. Sawyer manned the crêpe station one day.

The chef stopped by for a taste.

“I was done with college.”

The decorated one and author of two books (Noodle Kids and House of Vinegar) now lives in Kenilworth and serves as chef de cuisine at Adorn Bar & Restaurant, perched on the seventh floor at Four Seasons Hotel Chicago. Adorn features globally inspired cuisine starring the bounty of the Midwest. Sawyer and his wife/business partner, Amelia, moved to the North Shore last year with son Catcher, 16, and daughter Louisiana, 13.

“My interpretation of New American cuisine is taking what’s classic and familiar and adorning it with unexpected ingredients and presentations that will surprise and delight diners,” Sawyer reveals to visitors of the eatery’s website, adornrestaurant.com.

Born in McHenry, Sawyer moved to the Cleveland area with his family when he was 6. He wrestled and performed for the school orchestra at Strongsville High School. How many take-down specialists who could also bring the house down in music halls do you know?

“I hire people automatically if they were wrestlers or are in the orchestra,” Sawyer cracks in House of Vinegar (Ten Speed Press, 2018), which captures his fascination with the power of sour, shares his brilliant recipes, and entertains via his storytelling abilities.

The account about his purchase of a $29 cask of caramel-colored vinegar, when he was living in New York and paying $1,650 per month for rent while earning peanuts as a cook, is vivid, funny, and engaging.

“You want stories?” he says. “I have stories. I love telling stories. So much so that I could talk food cold.”

The ones about his late grandmother/early influence in culinary, Audrey Wetzel, usually include small armies at the dinner table. Jonathon Sawyer, after all, has 33 first cousins.

“Grandma loved cooking at home and loved entertaining,” Sawyer says. “Hospitality was her thing, her major thing. Five eaters, 25 eaters, it didn’t matter to her. Food always appeared to come out of everywhere at her place. She would embrace anyone who walked in and anticipated a meal.”

His mother, Becky, made out-of-this-world tomato sandwiches: two perfect pieces of bread, olive oil, and tomato slices that had never seen the light of a refrigerator.

Sawyer, post-culinary school, “cut my teeth” at the Biltmore Hotel in Miami and “made my first bones” as chef in New York City at Charlie Palmer’s Kitchen 22 and Michael Symon’s Parea. Working four months in Italy and four summers in France fattened his vita.

He returned to Cleveland in 2007, opening his flagship restaurant,

The James Beard Foundation (JBF) recognized Sawyer for his excellence at The Greenhouse Tavern. JBF is a nonprofit with a mission to celebrate, support, and elevate the people behind America’s food culture and champion a standard of good food anchored in talent, equity, and sustainability.

Sawyer, the lone non-Chicagoan nominated in the Great Lakes category in 2015, received his honor at the 25th annual edition of the Beard a w a r d s in Chicago— the first time the ceremony was staged outside N e w Y o r k City.

Sawyer jumped out of his chair, but only after he had recovered from a delightful state of shock. The victor returned to Earth, sans a parachute.

“You want to know what I was thinking as the nominees were being read?” Sawyer says. “‘No way,’ that’s what. No way would I be the winner.

“I was in the middle of sending a congratulatory text message to the chef I thought would win.”

“Fermentation is such a trendy buzz word in kitchens these days, but it is something Jon has been doing and researching throughout his entire career,” Symon writes in the foreword of House of Vinegar. “[Sawyer enjoys] learning how to intensify flavors and alter textures of food with age-old techniques and new, innovative thought processes that create exciting flavors that are all his own.”

Two recipes by Sawyer: Cream of Artichoke Soup with Hazelnuts; and Sustainable Fish en Papier with Hen of the Woods mushrooms, new potatoes, and Meyer lemons (visit jamesbeard.org/chef/jonathon-sawyer for details).

“I’ve never believed in secret ingredients, in a secret recipe,” says Sawyer, who has appeared on a number of cooking shows, including Chef America, Chopped Grill Masters, The Best Thing I Ever Ate, and Bizarre Foods with Andrew Zimmern. “If you want a recipe from me, here you go. A technique? I’ll show you.

“A dish, to me, is never perfect,” he adds. “There’s always room for improvement. No ceiling. Say I make a dish today and the same one 10 years from now. I’d expect it to taste better in a decade. Wouldn’t any chef? Wouldn’t you?”

But he knows there’s nothing wrong with constancy.

“Love it here,” says Sawyer, an avid cyclist. “Love the outdoors here. There’s a lot of Boy Scout still in me. I also love riding my bike along Sheridan Road, looking at all the trees. So many beautiful trees.”

Not a bad place to live.