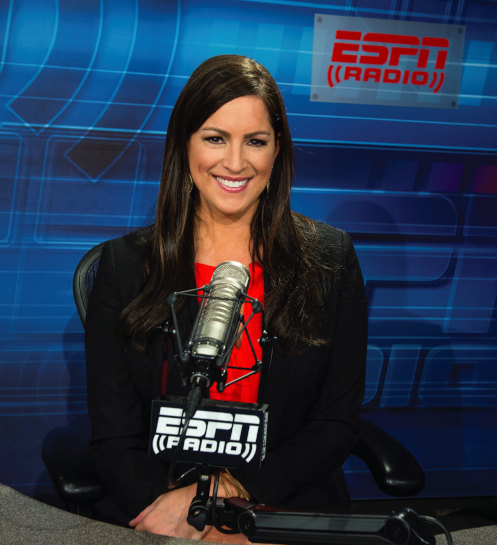 For the October 30, 2020, episode of ESPN’s Around the Horn sports roundtable show, regular panelist Sarah Spain—a 1998 Lake Forest High School graduate and an ESPN reporter since 2009—got dressed up as the Schitt’s Creek sitcom character Moira Rose. Spain nailed Rose’s accent, all while sharing her incisive opinions and competing against other journalists.

“I’ve always loved fun costume parties,” says the 40-year-old reporter, who lives in Wicker Park with her husband of five years, real estate agent Brad Zibung. “And, when I was young, I wanted to be on Saturday Night Live, doing comedy. I have a background in improv, and if you want to be any good at that you have to be a good listener. Listening well comes in handy for me when I appear on ‘Around the Horn.’

“I’ll hear a comment and then play off that with something fun, like a movie quote.” Spain hasn’t won an Oscar. Yet. But she’s captured two Emmys, a Peabody Award, and a Dan Jenkins Medal for Excellence in Sportswriting for Runs in the Family, the written accompaniment to her 2019 E:60 piece about former Kansas City Chiefs running backs coach Deland McCullough and his search for his birth father.

“The ceiling for women working in sports is higher than ever,” says Spain, who, in 2020, became a co-owner of the Chicago Red Stars, a team in the National Women’s Soccer League. “You’re seeing women as owners, as CEOs, as GMs, as color analysts, and as play-by-play announcers. But the basement? It’s about the same. There are people out there who still believe women don’t belong in sports industries. Women starting out continue the battle to be respected.” 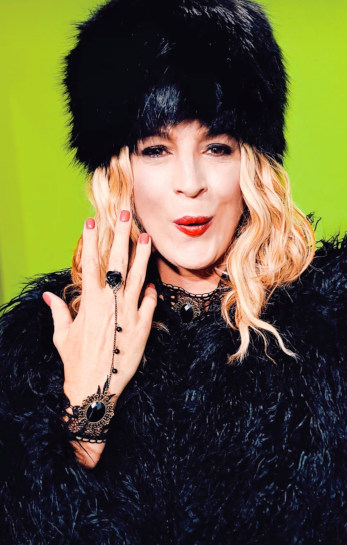 Spain was 20 years old and a Cornell University student-athlete, majoring in English, when the first issue of Forest & Bluff entered mailboxes. The stack of varsity letters she had earned at LFHS—in field hockey, basketball, and track and field—was slightly smaller than Jack’s beanstalk.

LFHS girls track and field coach Steve Clegg could see Spain excelling in track and field events that aren’t staged for high school athletes. Javelin, for example. So Clegg borrowed a javelin from a local college, introduced the light spear to Spain, and watched her chuck it far. Spain later set a Junior Olympics javelin record at a multistate competition and became a heptathlete at Cornell.

As a Scouts force on prep basketball courts, she recorded rare triple doubles of points, rebounds, and blocks. Swatting 10 or more shots in a 32-minute game, to go with recording double digits in points and rebounds, is Halley’s Comet territory.

No wonder Spain was a Lake Forest High School Wall of Fame honoree in 2018 with former Scout Matt Grevers, who flew to England in 2012 and bowed for Olympic gold medals in swimming.

“I questioned myself when I arrived at Cornell as a freshman,” Spain recalls. “Competing in a Division-I sport, while studying at an Ivy League school, I wondered, ‘Could I keep up?’ and, ‘How will I ever be able to manage my time?’ What I soon realized was, Lake Forest High School’s teachers and coaches prepared me so well.”

Spain graduated with distinction in all subjects and was a member of the National Society of Collegiate Scholars and the Golden Key National Honor Society (top 15 percent of her class).

She lived in Los Angeles for six years, initially hoping to become an actor.

“I did the acting thing for a while—you know, hiring an agent and working at a restaurant,” Spain cracks. “I took a class in TV hosting; it was a weekend ‘boot camp.’ Later, on a whim, I signed up for a TV sports reporting extension class at UCLA. I found out that I like to bring out the best in an athlete’s personality while conducting an interview.”

Fox Sports Net, the precursor to FS1, hired Spain as a production assistant on a nightly highlight show entitled The Final Score.

She eventually returned to the Chicago area and savored every chance she got to cover the sports teams she followed closely as a youngster at home with sister Katie and parents Rick and Nancy. A Chicago Bulls game, on TV, at the Spain household in the franchise’s glorious 1990s? Sarah was glued to the broadcast, with the remote nowhere in sight.

“I took over the TV when my Bulls were playing,” Spain says.

Today Spain is an espnW columnist, has a national ESPN Radio show Spain and Fitz and can be heard on her podcast That’s What She Said with Sarah Spain. In addition to her appearances on Around the Horn, she entertains and contributes sharp insights on the ESPN show, Highly Questionable. Spain’s reporting and features have accentuated other ESPN properties, including Outside the Lines and SportsCenter.

Among her plum assignments in the last five years were the Chicago Cubs’ three World Series games at Wrigley Field in 2016. She appeared on SportsCenter in pre- and post-game coverage each night. But not as a stiff, buttoned-up reporter.

“They wanted me to cover the games from the perspective of the fans,” Spain says.

Spain has fans. Her advice to the young ones, who want to do what she does for a living, is as on-the-mark as her impersonation of Moira Rose is.

“Lean into wha t separates you from others and own it,” Spain says. “Don’t become a cookie cutter professional because you think that’s the safe way. Be kind, make connections, and work super hard.”