The coach who guided New Trier Township High School’s boys tennis team to another state championship last month—32 years after he won the state singles title as a Trevians junior at the school—is nearing the end of a four-hour drive to Nekoosa, Wisconsin, when he answers his phone in early July.

“Really cool setting,” the fun-loving, easygoing 49-year-old adds on a day when lawns in England are serving as surfaces for professional tennis players at Wimbledon.

But Eckert hadn’t packed a tennis racket for the trip to the resort in central Wisconsin. Tennis shoes? Tennis shirts and shorts? All at home, back in Wilmette. Relics.

Eckert, who grew up in Glencoe, is geared up to play … golf. For four days. Sand Valley is also home to three golf courses.

Acing holes, rather than tennis foes, drives him now.

But the man—whose parents, Ted and Libby, first met on a tennis court in Oak Park and are huge Roger Federer fans—certainly knows how to coach tennis. The netter-turned-golfer would have been forgiven for shouting “Four!” after the boys’ tennis state tournament at Hersey High School in Arlington Heights on June 12.

That’s the number of state titles he has won as a coach at his alma mater since landing the job in 2008. A two-time (1987, 1988) state championship team member under eight-time state championship coach John Schneiter, Eckert helmed NTHS to state titles in 2010, 2011, and 2016, before his 2021 edition topped the field at the state tourney behind senior Max Bengtsson’s singles championship.

“Coach Schneiter (who died in 2014, at age 80) was a supreme motivator,” recalls Eckert, a 1990 NTHS graduate. “He had quite a presence and gave his teams so much confidence. He was more of a basketball coach, and that’s why his tennis teams were conditioned like his basketball teams were. His hoops and tennis teams, because of their fitness, were always tough—I try to instill similar toughness in my tennis teams.

“I remember he made us scrimmage in basketball against his state runnerup girls’ basketball team (1988-1989 season). That gave tennis guys the chance to see Coach Schneiter in his true element. We also saw a different side of him, a side that made all of us glad that we played tennis for him instead of basketball.”

Two other players on Schneiter-coached state championship teams in the 1980s—Kevin Andersen and John Gridley—coach in Eckert’s program today. Andersen serves as a varsity assistant; Gridley heads the sophomore crew.

“New Trier tennis, in that era, was pretty special,” says Eckert, who finished third in singles at state as a senior, after downing W e s t Aurora High School’s Paul Pridmore for the state championship in 1989. “Our players, probably every season, get sick of hearing New Trier tennis stories from the ’80s.”

Eckert picked the perfect time to tell a dated New Trier tennis yarn to Bengtsson at the beginning of the state singles championship match last month. Bengtsson trailed another Max, Hersey’s Sheldon, 5-0 in the first set. During the changeover Eckert noted another state entrant in singles had fallen behind 5-0 in the first set of a fourth-round match in 1989.

Second-seeded Jim Panagopoulos, another West Aurora HS combatant, zipped to a 5-0 advantage versus the future state champ more than 30 years ago. Eckert then chipped away and chipped away some more, winning four straight games before Panagopoulos secured the first set by taking the 10th game.

Eckert’s message, via his resilience and resolve, to the Blackhawk: You’re going to have to earn every point in every game for the rest of the match.

Eckert won the next two sets, sending Panagopoulos to the back draw.

Northwestern University-bound Bengtsson mirrored his coach’s path to victory on the big stage, winning three straight games after the changeover and then claiming New Trier’s seventh state singles title in program history with a 3-6, 6-3, 6-2 decision on Sheldon’s home court.

“All Max needed to do was to hit his shots a little harder and win a couple of games in that first set,” says Eckert, whose strong mind deflated opponents as much as his crosscourt winners did in his prep days. “The longer a match goes, the more advantageous it is for him. He’s such a hard worker, and he’s in such great shape. You could sense the match turning in his favor toward the end of the first set; the entire crowd could.”

Eckert took his tennis game to the University of Notre Dame and played four seasons for the Irish. Mostly a No. 3 doubles player while majoring in English, he also found success on the courts without a partner, achieving all-time top-10 honors at ND for winning percentage in singles.

“I’ve always been a big New Trier fan in general, not just a follower of the school’s tennis teams,” says Eckert, also president of his family’s Skokie-based business, Inventive Manufacturing, which is a part of Harig Manufacturing. “I loved all sports at New Trier. And I was a girls basketball color analyst for the high school radio station. Hey, I had inside information, thanks to Coach Schneiter making us scrimmage his team.

“New Trier,” he adds, “was an amazing place when I was a student there. And it still is.”

But none of the teams at the Winnetka school will ever top his in-house bunch: wife Laura, a former No. 1 singles player in tennis at Forest View and Prospect high schools; their son, Griffin, 7; and Tad’s stepsons, Ryan and Casey Fenner.

Ryan Fenner, a senior-to-be at New Trier, is a powerlifting state champ; Casey will be a freshman this fall at NT’s Northfield campus, not far from where the new tennis courts pay tribute to all of the program’s state medalists.

“Those two gifts from my wife welcomed me with open arms,” says a grateful Eckert, who got married in 2012. “And then Griffin came along.

“I love fatherhood. I love my family.”

Tennis-speak—still par for the course for 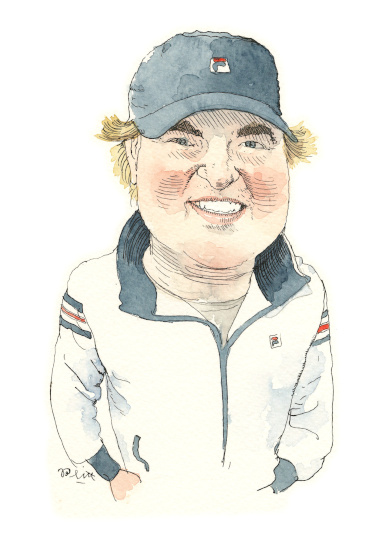