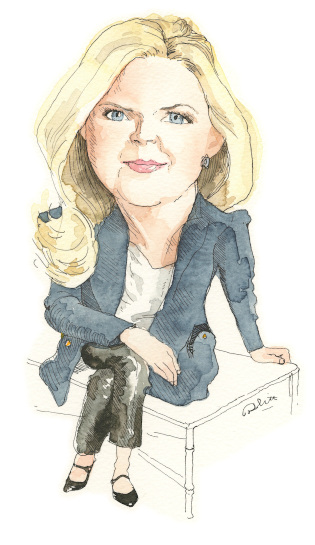 Peyton Merrill needed two items and her husband, Topher, to come up with a catchy name for her first boutique in 2020.

She sat in the couple’s Winnetka home, with a pen in her hand and a notebook on the kitchen table. Peyton brainstormed and doodled, hoping something she had scribbled would pop off the page. Sensing his wife could use a nudge, Topher asked, “Who has inspired you?”

Peyton stopped scribbling and let her mind race. A history buff since earning her degree in that subject from Roanoke College in Virginia, she thought of Bunny Mellon, an American style icon, art collector, and talented landscape garden designer who died at age 103 in 2014.

The White House Rose Garden? JFK asked Mellon to redesign it in 1961.

Bunny hopped to it.

“Quick, simple, easy to remember,” says Merrill, 51. “Hearing my husband’s question in the kitchen that day was all it took to help me focus and think of a name that would reflect the boutique’s essence.

“On many issues related to business, he’s my go-to.” Bunny & Babe customers won’t have to go too far from the shop’s original, 1,800-square-foot space to visit its second, 1,600-square-foot location, set to open in mid-August.

Two doors down, to be exact, at 559 Chestnut Street.

“It’ll be an exciting space, with more of a casual vibe,” Merrill says, adding her venture hurdled the challenges of the pandemic cleanly and enjoyed its most profitable month in May. “We expanded because there’s such potential out there. We’re attracting all ages to our store, from 13-year-old girls to women in their 70s, and we’ve hit the sweet spot in the market—our customers want more of what they are loving.

“This new space,” she adds, “will allow us to expand our offerings in terms of designer mix and price point. We will be able to accommodate both discerning women and their savvy daughters—and provide gifts, too—all in our two neighboring spaces.”

The daughter of George, who worked in the computer industry, and J.E., who served as creative

director of her advertising agency, Merrill grew up in Greenwich, Connecticut, and, at age 14, landed a job in sales at a Benetton.

“I was obsessed with fabrics and colors,” Merrill says. “I remember my mom, also an artist, being into fashion as a form of expression.”

Peyton then developed a passion for history at tiny Roanoke (a liberal arts college with approximately 2,000 students) in Salem, Virginia. Books about the Kennedys—Jackie Kennedy referred to her husband’s presidency as an “American Camelot”—World War II, and the Vietnam War enthralled her. She devoured a steady diet of biographies, too, in addition to the reading assignments in her classes each semester.

“Roanoke,” she says, “provided me with a well-rounded education. I loved my professors.”

“Living in London opened my eyes to a lot of things,” says the mother of three (Chloe, 20; Brooks, 18; and Charlie, 15) and Winnetka resident since 2004. “I learned all about branding from Thomas Pink’s director of marketing and how important it is to create a company mantra that’s clear and succinct. And Topher and I traveled all over Europe on the weekends. I took an art history class at Sotheby’s, visited museums, and checked out antique shops in Paris and Brussels.”

“I knew I could run a boutique,” she says. “Opening one was not daunting to me. The most challenging aspect of it, initially, was the buying side because that was new to me. But I found those challenges fun and exciting; I still do.”

Additional designers introduced in the new space will include Blaze Milano, Cinq a Sept, Ciao Lucia, For Love & Lemons, and more.

First-time Bunny & Babe customers won’t just feel at home upon entering Merrill’s; they’ll also feel as if they had just entered … a home.

“It’s a colorful and happy and welcoming place, with sky-blue wallpaper,” Merrill says. “Our fitting rooms have sofas and are like living rooms. People come in and don’t feel intimidated, but so much of that has to do with our attentive team of 10. What’s more important than customer service?

“I get to work with awesome people. I feel fortunate every day.”