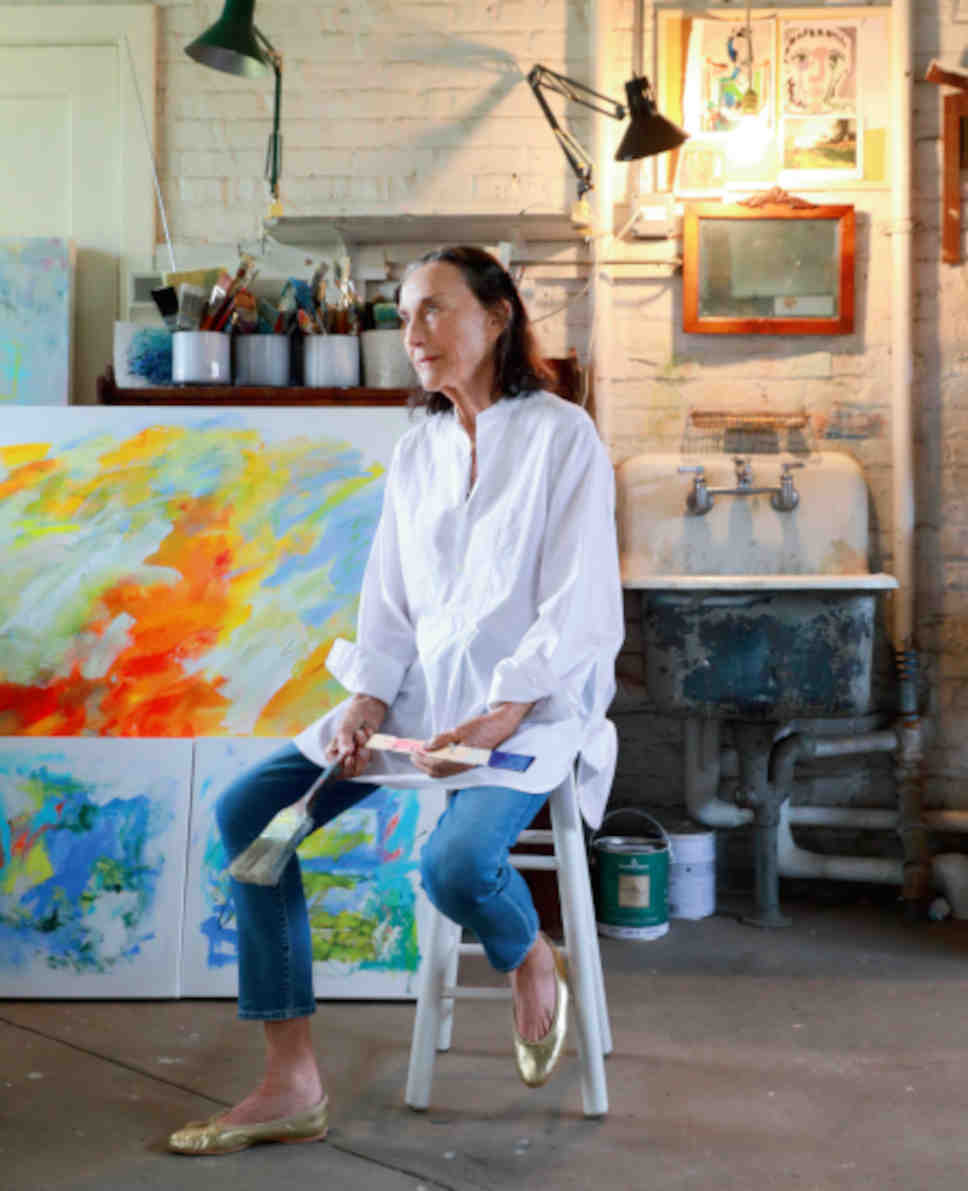 For nearly 50 years, Susan Lawson Bouma’s proverbial “happy place” has been in front of a canvas. The colorful, oversized abstract paintings she creates are bold, infused with energy and movement and often left without titles so those who acquire them can make their own artistic interpretations.

“I rarely name paintings,” says Bouma, who moved to Lake Forest with husband, Robert, and their young family in 1979. “People can look at them and see what they see and feel what they feel. I believe naming my paintings is limiting because it influences the viewer.”

She accidentally discovered a passion for painting in the 1960s when she was called in to substitute for a New York City public school art teacher who walked out after the students threw paint in class. She spent the rest of the year as the school’s art teacher and has been devoted to developing her skills as a painter ever since, studying art in America’s major cities: New York, Chicago and Los Angeles.

A native of Cedar Rapids, Iowa (also home to the legendary Grant Wood, most famous for his iconic American Gothic painting), Bouma started out by studying the masters in oil—drawing inspiration from visits to the Metropolitan Museum of Art and the Art Institute of Chicago, as well as Sotheby’s and Christie’s auction catalogs. Focusing on French impressionists Monet, Cezanne, Matisse, and John Singer Sargent, as well as American impressionist painter Frank Benson, she learned about color mixing and composition. 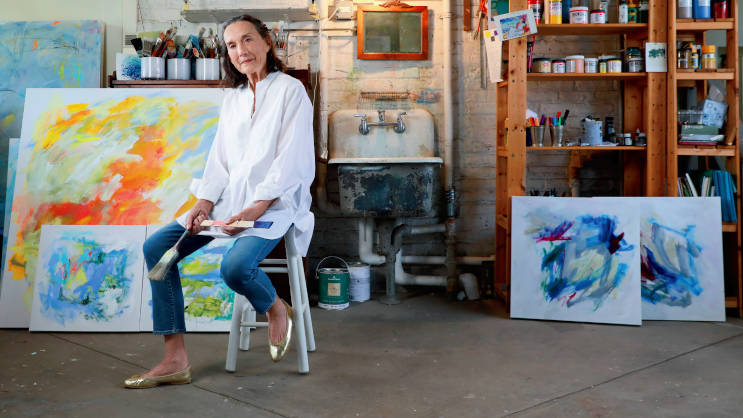 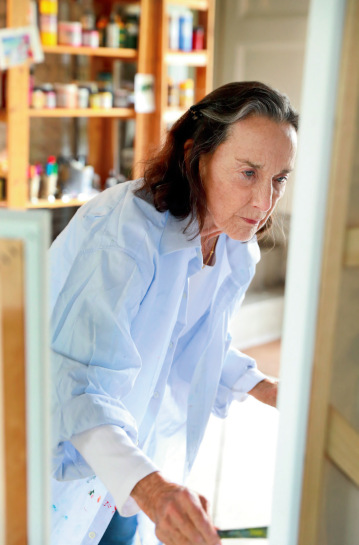 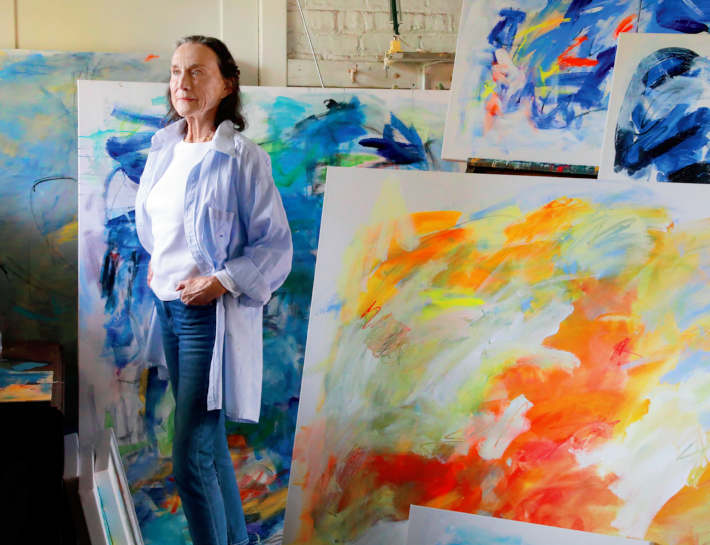 About 15 years ago, Bouma became interested in abstract painting after watching an artist friend pour paint on an unprimed canvas on the floor of her studio. This led Bouma to study American abstract expressionist painters Helen Frankenthaler and Joan Mitchell. It also led her back to the classroom. Under the guidance of Deborah Gooch, a notable Vero Beach-based artist and teacher at the Vero Beach Museum of Art, Bouma began to hone her skills. After a few years of studying with Gooch, Bouma was invited work beside her in her studio—the Vero Beach studio she maintains today with three other artists.

“When I came back from Florida early in the pandemic, I didn’t realize that I would be away from my studio for nearly a year,” explains Bouma, who majored in English and History at Coe College before moving to Manhattan, where she studied art at the New School and later earned a master’s degree at New York University. “I was anxious to paint but no room in my home was suitable. That’s what led me to the garage. While it’s a bit shabby, it has high ceilings and good light—even an old-fashioned sink. On warmer days, I could open the garage doors.”

This would not be Bouma’s first home studio. When she and Robert bought the 1918 home more than 40 years ago, they created a space to paint on the third floor by adding a skylight. As time has passed, this room became the sewing room, and the wrapping room, and eventually the storage room.

But Bouma had found a new place to paint: a studio at Gorton Community Center that she shared with a group of likeminded female Lake Forest painters in the ’80s and early ’90s. The group was critiqued weekly by the chair of Lake Forest College Art Department professor Michael Croydon, whose sculptures are displayed prominently around Lake Forest.

Bouma donated one of her pieces to this year’s “Cattails and Cocktails” auction to benefit Lake Forest Open Lands Association. Given everything that’s happened over the last year, she is particularly excited to continue sharing her work with others.

“I’m thrilled when someone connects with one of my paintings,” says Bouma. “The thought of my work on display in someone’s home is powerful and gratifying.”

Bouma, who served on the Board of Trustees of the Vero Beach Museum of Art for six years and is still involved in the Vero Beach art community—including a solo show in 2019—feels she was fortunate to have a place to work during the pandemic.

Artists rely on the community and camaraderie with other artists and Bouma was happy to paint on occasion with Lake Bluff artist Vanessa Clarke, a recent graduate of the MBA program at the Art Institute, who had to give up her studio in the city due to the pandemic.

Even her grandchildren came to paint—most often 8-year-old Nelly Herbert, daughter of Whitley Bouma Herbert, who lives around the corner.

“She came over to paint a canvas for her mother for Christmas and I said ‘Nelly, would you like a few pointers?’ and she said ‘No, thank you.’ She wanted to do her own thing and I thought that was great,” Bouma explains. “But I know Nelly is proud of me. Whitley overheard her on a Zoom call for school and she was holding up a painting and announced, ‘My Nana is an artist’.”

A fully vaccinated Bouma was able to return to her studio in Florida this spring.

“Having the garage space is what got me through COVID. It really did,” she adds. “I missed the give and take and energy of having other artists around but to be able to just walk out the door to the garage and look at the painting I was working on and put down a few strokes and sit down and think about it … it was truly a gift.”