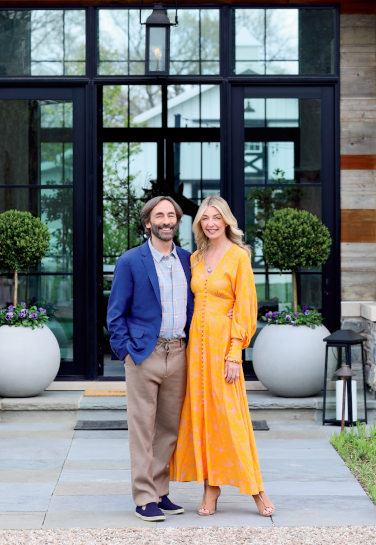 At the height of the pandemic last spring, avid bread baker Jim Challenger and his wife, Lisa, decided to bake bread every day for their North Shore community until the pandemic reached its end. They lasted 55 days—baking daily upward of 16 loaves from their home kitchen—but then had to slow down.

“Bread has been the backbone of communities for centuries,” says Jim. “It’s a way to show and share love. People were bringing loaves to their 90-year-old parents in nursing homes, and bread baking became a viral quarantine sensation. You couldn’t find bread, flour, or yeast at the grocery store for months.” 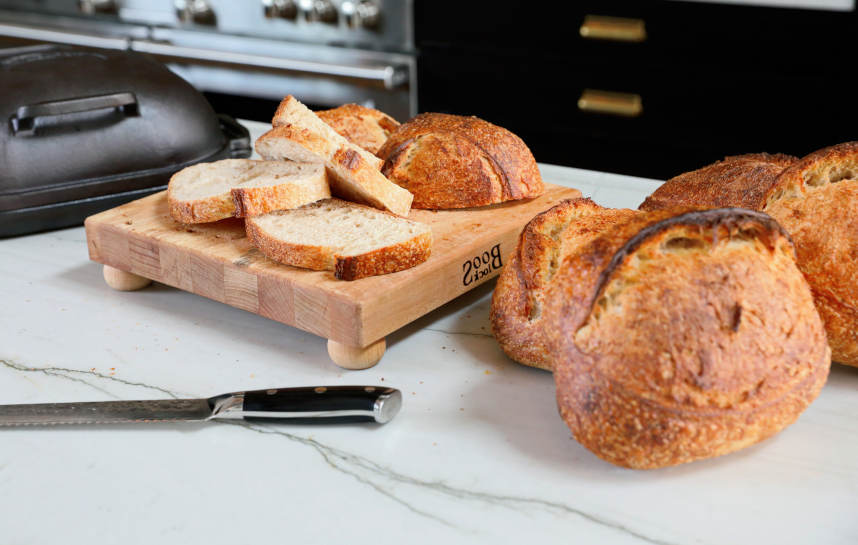 The Challenger’s signature loaves of bread. BELOW: Jim Challenger. 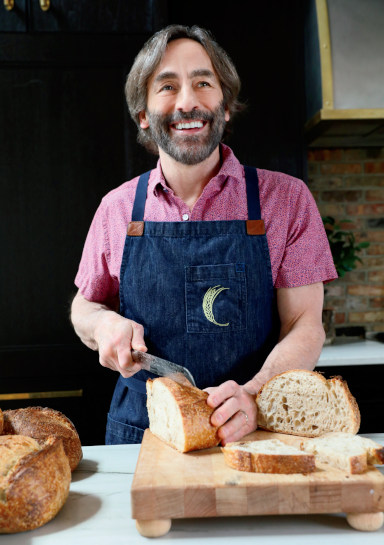 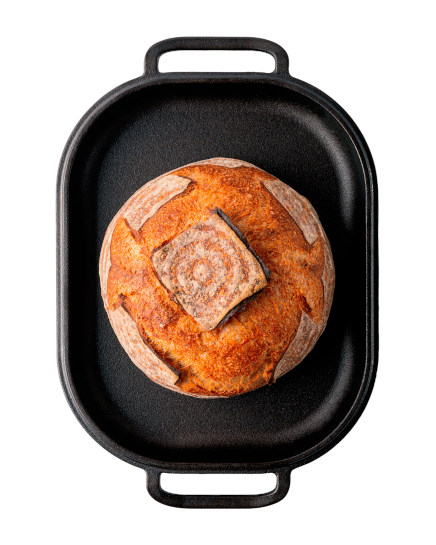 The Challengers still bake 20 to 60 loaves each week, using the revolutionary cast iron bread pan they developed under the name Challenger Breadware—which launched in 2019 and sold out almost immediately. To this day, their flagship bread pan is in hot demand and ships worldwide.

Made in Wisconsin and seasoned in Indiana, the pan features a shallow base for loading dough, a sealed environment to create the perfect amount of steam, top handles to easily remove the cover mid-bake, and a deep cover with plenty of room for your oven spring.

“When I designed the pan, I thought it’d be something I could use and maybe give to friends but never considered it as a viable business,” recalls Jim. “Now, there are so many new bakers who discovered the hobby in 2020 and have stuck with it. It’s a challenging craft to learn, but you always have something with which to feed your family and friends.”

Jim started baking bread nearly five years ago, through hosting Friday night pizza parties for the Challenger’s five kids and their friends. Sharing food, he says, has always been a major component of their family life. So, when the couple started seriously considering a move to realize their dreams of farm living, they added a standout entertainer’s kitchen to the must-have list.

“We dreamt of a country lifestyle, but we were unwilling to leave our town,” says Lisa. “Here, we have the appeal of living in the country but are still five minutes away from Whole Foods. Our property, Blue Moon Farms, sits on over three acres and we also bought the land next door, which borders the Chicago River. It is filled with trees and wildlife, and we wanted it to stay undeveloped.”

The pair worked with local architect and builder Timm Martin—a former New Trier Township High School classmate and longtime close friend of Jim’s— to execute their vision of a dreamy modern farmhouse in Northfield with touches of Napa Valley-inspired architecture, like an oversized fireplace and an abundance of natural stone accents. Throughout the three-year build, the Challenger’s business continued to grow into what is now a burgeoning lifestyle website, artisan breadware brand, and viral social media destination.

Take, for example, a recent TikTok shared by Lisa showcasing what the Challengers dub “Community Bread Day,” when the couple distributes homemade loaves of bread to a list of 100 plus people (including the pastor of Northfield Community Church) who have requested a loaf. The video reached over one million people. 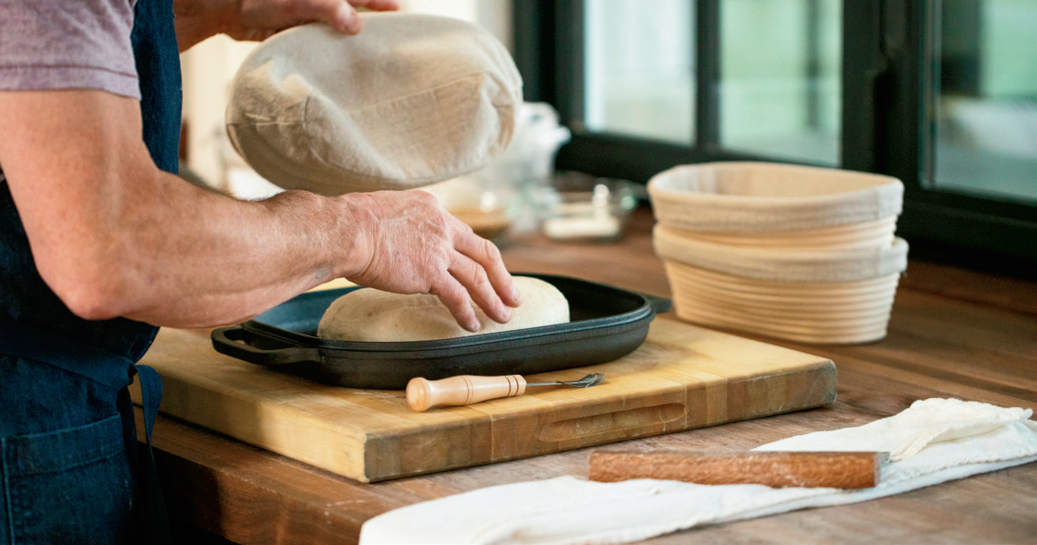 With that kind of reach, Lisa often fields texts, emails, and direct messages from followers about their home design, so they worked with Martin to sell the scalable plans online. Now, a fan in Louisville is replicating their exact house with just a few tweaks. Most people, of course, have no need for an 18-foot kitchen counter or an in-home conservatory. For the Challengers, those features are essential.

“We run our business from home, so we needed extra space to develop recipes, film content, and host events and classes, like a breadmaking course we introduced last year with local bakers including Greg Wade, lead baker at Publican Quality Bread and a James Beard Award winner,” says Lisa. “We use the conservatory as our office. It has a potting kitchen and opens to an indoor/outdoor bar, too.”

The U-shaped home resembles a giant, albeit gorgeous, barn with 27-foot ceilings, an open concept floorplan, and indoor/ outdoor living, all centered around a beautiful courtyard complete with fire pits, a screened-in patio, and no shortage of seating for family and friends. 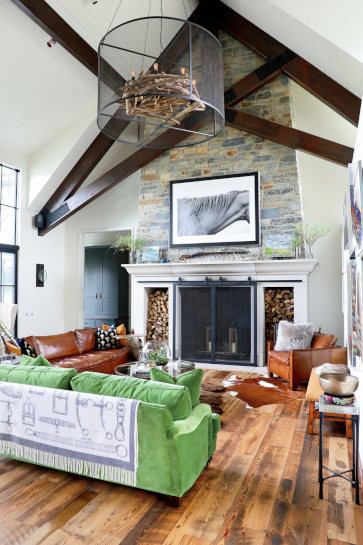 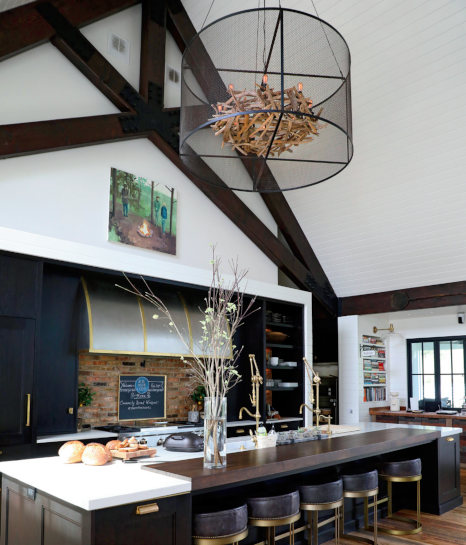 The kitchen at Blue Moon Farms PHOTOGRAPHY BY KATRINA WITTKAMP

When we spoke, they had grilled crab legs the night before to enjoy outside. And for their five-year wedding anniversary this year, they’re planning a seafood boil and oyster shucking class—the first time they’ll bring their extended clan together since pre-pandemic. They’d had a small 35-person wedding in Charleston with a “blue moon” theme—Jim proposed on a blue moon and they have matching blue moon tattoos—and had initially planned to reunite in South Carolina but, they’ll settle for the perfectly apropos Blue Moon Farms instead.

They also have plans to make a triumphant return to in-person events with bread baking workshops, a fall festival, and longterm, regular bread giveaways. First up, the duo just launched an online “baker’s classroom,” where Jim can share his tips and tricks for creating the perfect loaf of bread. It’s a science and an art, after all. They are also expanding the Challenger Breadware brand to include everything a budding baker needs to bake better bread, like gloves, aprons, and so much more. 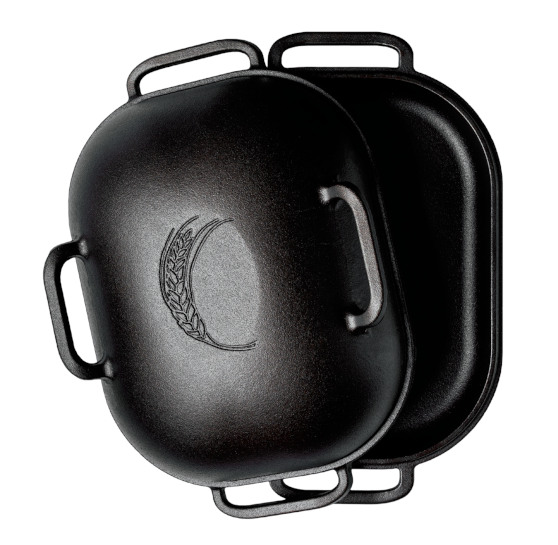 “We love what we do and have so many lofty goals for the future,” says Jim. “Ultimately, though, everything comes back to sharing love and sharing bread.”