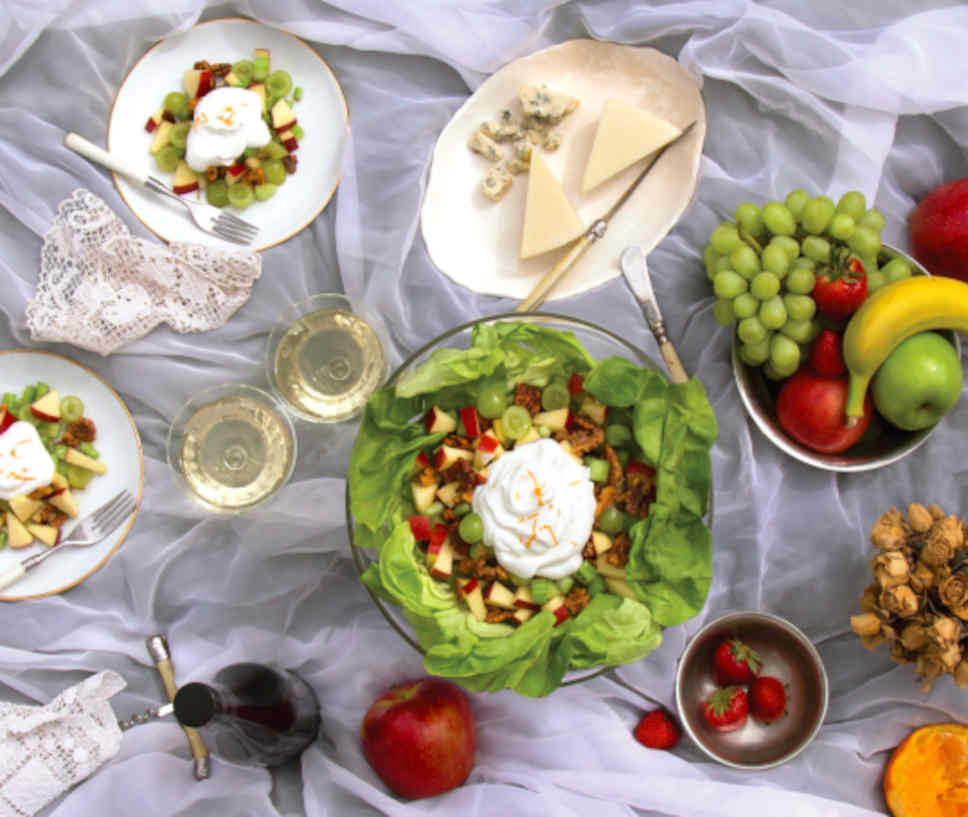 The recipe for Waldorf Salad was first published in 1896 by The Saalfield Publishing Co. of Chicago, Akron, and New York in a 907-page tome written by Oscar Tschirky—famed maître d’hotel at The Waldorf Hotel from 1893 to 1943. Tschirky wasn’t a chef, but he had a shrewd intuition for what guests might like. He’s also credited with being the first to put Eggs Benedict and Veal Oscar on a menu, among other classic hotel dishes.

Finding The Cook Book by “Oscar” of the Waldorf, in a used bookstore, I went straight to page 433 to read the Waldorf salad original, and found this: “Peel two raw apples and cut them into small pieces, say about half an inch square, also cut some celery the same way, and mix it with the apple. Be very careful not to let any seeds of the apples be mixed with it. The salad must be dressed with a good mayonnaise.”

So, that was it? I had to laugh. Was Oscar the first guy to combine celery with the tart sweetness apple in mayonnaise? Probably not. But the salad was served at the inaugural dinner of New York’s Waldorf Hotel in 1893 (it became the Waldorf Astoria later) guests loved it, and it’s been known as the Waldorf Salad ever since.

The hotel has served many renditions of the salad over the decades, but in the spirit of their late ‘40s and early ‘50s renditions, our version combines apple, celery, and grape with spiced walnuts and candied ginger in a cloud of whipped cream, sour cream, and boiled dressing. Because the colors of the salad are so pretty, I like to present it “naked” with spoonfuls of the dressing on top, to be mixed at table.

FOR THE SPICED WALNUTS:

• Salt and cayenne pepper to taste

FOR THE BOILED DRESSING:

• Grated zest from one small orange

Rinse. Drain. Remove skins with a tweezer, or a mushroom brush.

Heat peanut oil in deep fat fryer. Fry walnuts in oil at 360 until golden brown. Remove to a paper towel and sprinkle with salt and cayenne pepper.

In a saucepan, combine flour, sugar, salt, mustard, and paprika. Over low heat, gradually whisk in water and lemon juice. Continue whisking until mixture thickens and boils. Boil for an additional minute. Remove from heat. Cool just slightly. Whisk in the egg yolks and butter. Cool completely. This makes 2ó cups of dressing; measure ⅓ cup for the salad and refrigerate the rest for another salad. (Very good on coleslaw!)