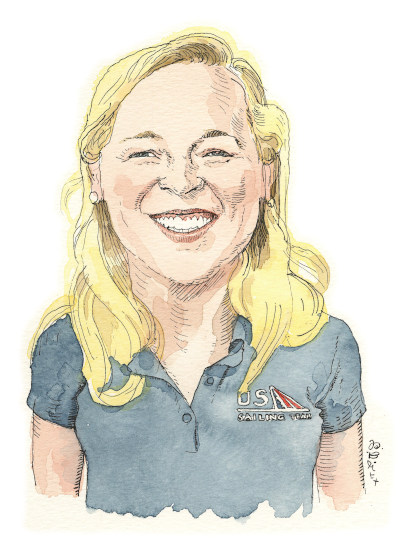 Four words, uttered calmly by her grandfather, turned a terrifying moment on board a boat into an exhilarating one for Maggie Shea.

“I was young, sailing on Lake Michigan, and as soon as Grandpa (John Nedeau) realized we were about to capsize, he said to me, ‘Hang on, little honey,’ ” Shea, 31, recalls. “It was real cute, the way he said that.

“And he was as cool as a cucumber as we overturned,” adds the Wilmette native and 2007 New Trier High School graduate.

Both survived the mishap. Nedeau, of North Muskegon, Michigan, later won his first Chicago Yacht Club Race to Mackinac in 2011—in his 64th attempt, at age 80—and liked to tell his Windancer crew, before every race, “There’s no place I’d rather be than here.” Shea became a New Trier Sailing team captain, raced for sailing squads as a political science major at Connecticut College, and, later this month, gets to be in the most enviable place in the world for a competitive sailor.

Crew member Shea and her 32-year-old skipper, Stephanie Roble, qualified to race at the Summer Olympics as USA Sailing team members in the 49erFX women’s doublehanded skiff division. Their sailing event starts on July 26, with the medal race scheduled for August 2.

Grandpa John, who died in 2016, would have beamed brighter than any of Lake Michigan’s 102 lighthouses upon hearing the news of Shea’s spot on Team USA following Shea/Roble’s third-place showing at the 2020 World Championship in Australia, which served as half of the U.S. Olympic Trials in sailing.

“It’ll be an honor to represent the United States at the Olympics,” says Shea, who lives and trains in Miami. “Stephanie and I worked really hard to get to this point. We’ve wanted to do this since we were little girls. Our heroes are Olympic sailors.

“My grandpa and family (parents Don and Mindy and siblings Annie, NTHS Class of 2005, and Drew, NTHS ’10) helped me fall in love with all aspects of sailing. And now Stephanie and I are addicted to the intensity of competitive sailing and ready to do whatever it takes to bring home a medal.”

Shea and Roble, an Old Dominion University graduate, were fierce rivals in high school and in college before opting to become elite boat mates. Currently No. 6 in the world rankings in the 49erFX class, they’ve been ranked as high as No. 4. The pair silvered at the 2019 Pan American Games in Peru.

Roble grew up in East Troy, Wisconsin, and learned to sail on Lake Beulah.

“She’s the social butterfly and I’m the introvert,” says Shea, who joined forces with Roble after college to form Epic Racing, a professional match racing team, and won the overall Women’s Match Series in 2014. “Stephanie and I are great friends, and we love sailing together. In sailing we complement each other in many ways. Stephanie is the naturally talented sailor and likes dealing with the shifting winds and unpredictable conditions, while my job tends to be more physical than hers. I’m also into tactics and strategies, as well as making sure our equipment is set up the way it should be—call me the ‘checklister’ of the duo.”

Shea suffered a torn patellar tendon while training abroad last October, months after the International Olympic Committee and Japan agreed to postpone the 2020 Summer Olympics because of the coronavirus p a n d e m i c . Shea and Roble crashed into a wave, abruptly reducing the speed of their boat from 15-20 mph to 0 mph.

Shea needed stitches in her knee but avoided surgery.

“I had to return home and rehab for a couple of months,” Shea says. “That’s the most time I’d been out of a boat in eight years. Our training staff was amazing, and I’ve never felt stronger than I do now.”

Shea joined the Chicago Yacht Club junior sailing program, sailed in her first race in junior high school, and was a first-time entrant in the 333-mile Chicago-to-Mac race at age 16.

Serious commitments to sailing in high school made her miss significant chunks of school days at New Trier each year. Less than a year after hitting the water for the final time as a New Trier Sailing team member, Shea—whose siblings also served as New Trier Sailing captains—got her feet wet at her first Olympic Trials (Laser Radial class) in 2008.

“New Trier was, and still is, so big,” Shea says. “I kind of disappeared there at times, because sailing was my thing, it required a lot of time, and it was something I wanted to pursue in college. But I can’t say enough good things about my teachers at New Trier; they were incredibly accommodating whenever I told them how many classes I’d have to skip because of sailing.

Also crystal, from Shea’s adventuresome childhood on boats to her admirable quests today: her parents’ support.

“They’ve had a huge, huge, huge impact on me,” Shea says. “My parents have always had an unwavering belief in my dreams, no matter how delusional they might have seemed all those years ago. They kept telling me, ‘You put your mind to something; you can do it,’ and, ‘Go for anything you want because we know you’ll land on your feet.’

“I constantly thought about them and their strong belief in me during the challenging times Stephanie and I endured at the latest Olympic Trials (in New Zealand in late 2019, and in Australia in early 2020).”

But sailing, to Shea, is more than vying for prestigious medals all over the world or topping a match racing series.

Sailing is a lifestyle.

“I continue to find it fascinating, fighting the water and being at the mercy of the conditions,” Shea says. “I love that no two days on the water are ever the same. Through sailing I learned so many important lessons about life when I was young, thanks to my grandpa and to the other people in my life who love it as a recreation.

Visit roblesheasailing.com for more information. Visit olympics.com/tokyo-2020/en/ on July 26, when Shea and Roble begin their quest for an Olympic medal.