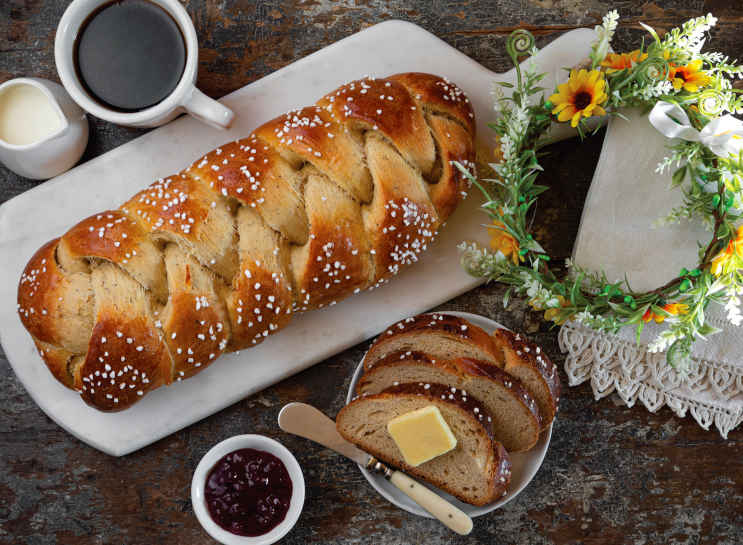 Fragrant with the lovely scent of cardamom, this golden, Swedish-pearl-sugar topped braid has been part of the Good Templar Swedish Day festival tradition for decades. But what—or perhaps who, is a Good Templar?

With an organizational structure modeled on Freemasonry (but open to both men and women) the Stockholm-headquartered International Organisation of Good Templars (IOGT) was one of many temperance organizations founded in the 19th century, promoting a lifestyle free of alcohol and drugs. And it has some strong North Shore connections.

Good Templars who immigrated from Sweden to Chicago set up lodges for their gatherings all over the city. Hoping to preserve Swedish traditions, lodges on the north side came together early in the 1900s to sponsor a large Swedish festival at Linden Park in Evanston. Because the festival was so well received, in September 1911, Chicago Good Templars expanded the party to become the annual “Svenskarnas Dag” (Swedish Day) at Ravinia Park, celebrating Midsommar— the longest day of the year. By 1924, with festival attendance topping 10,000, the group started scouting for their own property. They bought a pretty, 66-acre site near the Fox River in Geneva (now known as Good Templar Park) and kicked off the first Swedish Day there on June 30, 1925, with more than 14,000 celebrants.

The vintage recipe, from Beatrice Ojakangas, allows you to chill the dough after mixing, eliminating some of the time and effort. It’s very best fresh out of the oven, with a little butter on top.

In a large bowl, dissolve yeast in the tepid water. Stir in dry milk powder, sugar, ground cardamom, salt and beaten eggs. Add 2 cups of the flour; mix until smooth. Stir in the melted butter and 2 more cups of flour. Mix until very smooth. Add remaining ó cup flour and continue stirring as the dough gathers into a ball. Dough will be stiff but sticky. Knead briefly. Gather into a ball and nestle in the bottom of the bowl. Cover bowl with plastic wrap and refrigerate overnight (at least 8 hours.)

Spread two baking pans with parchment paper. Remove dough from refrigerator. On a clean work surface, divide dough into two equal halves. Divide each half into three balls. Roll each of these six balls of dough into 20-inch-long ropes. Place three of the ropes lengthwise on the center of one of the parchment-covered baking sheets. Braid into a loaf, tucking ends under at the ends of the braid. Repeat with the remaining three ropes. Cover loaves with non-stick-spray coated plastic wrap; allow to rise in a warm place until puffy for 1 hour. Set oven rack to center position; preheat oven to 350 degrees. Discard plastic wrap and brush loaves with beaten egg. Sprinkle each loaf with half of the pearl sugar. Bake 20 to 25 minutes until golden brown.