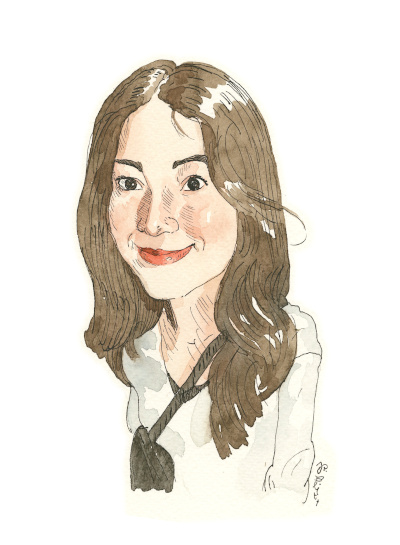 Space was available on Heidi Henderson’s desk at work one day in 2017.

“I had to put my head down and rest for a while,” recalls Henderson, now 42 and a Winnetka resident.

“I was so fatigued.”

Concerned co-workers at the office in Chicago had noted how ashen Henderson looked. J.P. Morgan Executive Director Ben Pogofsky was aware Henderson had been treated for gastroenteritis after her visit to an ER earlier in the month.

“I felt like a million bucks for about a week,” Henderson says. “The antibiotics seemed to be working. I was advised by the ER personnel to follow up with a gastroenterologist.”

But well before the appointment, Henderson felt like a few cents.

Pogofsky happened to be a new member of the Gastro-Intestinal Research Foundation (GIRF) board of directors and offered to call Dr. David T. Rubin, who is GIRF’s lead scientific advisor, a renowned gastroenterologist, and a co-director of the University of Chicago Medicine Digestive Diseases Center.

“I told Benjy, ‘Yes, yes, please call him,’ ” Henderson recounts. “I was desperate.”

Dr. Rubin then called Henderson 30 minutes later and asked her to describe the symptoms she had experienced in the previous six days. Dr. Rubin listened.

His next question: “Are you able to come to our clinic now?”

Henderson ordered an Uber. Dr. Rubin and his team evaluated her at the clinic—an hour after the phone call—and diagnosed ulcerative colitis.

Each year 70 million Americans are diagnosed with a digestive disease.

Henderson would tell her story—the one you just read—a million times to help shed the stigma attached to digestive diseases.

“What I have is a chronic disease, but knowing what I had was helpful,” says Henderson, who joined GIRF’s advisory council in December.

“Dr. Rubin created a treatment plan, and I was confident I was put on the right path to recovery. I’m fine now; I’ve been flare free for two years.

‘What’s really important to me now is to do what I can to remove the stigma associated with digestive diseases. We can get there. I’m eager to talk about this with anyone. I want to get the word out to all sufferers: You’re not alone. There’s hope for you. And GIRF and doctors like Dr. Rubin care deeply about helping those with illnesses like mine.”

Founded in 1961, GIRF is a nonprofit dedicated to raise funds to support the physicians and scientists at the University of Chicago Digestive Diseases Center (UCDDC) in their efforts to provide outstanding care, train future leaders, and perform innovative, clinical and laboratory research in order to treat, cure, and prevent digestive diseases.

GIRF held its Diamond Anniversary Ball virtually on May 1, raising more than $1.3 million for research at UCDDC.

The GI Research Foundation honored the late Beatrice “Bee” G. Crain, 100, of the Crain-Maling Foundation with the inaugural Joseph B. Kirsner Award for her lifelong commitment to GIRF and presented the first-ever Partners in Science Award to longtime GIRF champions Sy and Nancy Taxman.

Born in Kansas, Henderson moved to Illinois with her family when she was 5. They lived in Villa Park and moved to Wheeling when Heidi was in the seventh grade. She attended Wheeling High School and then a high school in Portland, Or e g o n , before returning to Illinois and graduating from Buffalo Grove High School in 1996.

Henderson began her college years at Harper College in Palatine and ended them at Northwestern University. In between? Semesters at the University of Illinois-Chicago and jobs as a bartender and runner/clerk/trader at the Chicago Mercantile Exchange.

“There were so few females when I was at the Merc,” Henderson says. “There I was, a 4-foot-11 woman next to 6-foot-4 men who played Division I sports in college. They all were incredibly nice to me and related to me in a sisterly way.

“We all felt like dinosaurs in the pit at one point in 2009, because of the transition to electronic trading.”

Henderson earned her degree in economics at Northwestern in 2012, and then entered the wealth advising industry.

Priceless was her good fortune on that critical day at work four years ago.

“Benjy’s father (the late Larry Pogofsky) was active in GIRF and knew Dr. Rubin well,” Henderson says. “I’ll always be thankful for that connection. Benjy put me on the path that led me to the help I needed. Dr. Rubin was amazing from the moment I met him. Comforting, too.

“I have to tell you what else he did for me. I had something going on with my vision, pre- Covid. I ended up getting an MRA (magnetic resonance angiography), which is basically an MRI with more detail. They found a bulge in a blood vessel in my brain. I called Dr. Rubin, because I consider him a friend, and he referred me to a neurosurgeon.”

Nobody has influenced Henderson’s life more than her mother, Taiwan native and Franklin Park resident Harumi, has. Harumi worked hard and tirelessly as a waitress while raising Heidi and sons Sean and Hugh on her own.

“An amazing mom,” Henderson says. “I was young, 5 or 6, when my parents divorced. She spoke very little English when she got married. But she was independent, adaptive, and motivated. She did what she could, all while being incredibly supportive as a parent.”

Henderson lived in Chicago from 1998 until late May, when she moved to Winnetka.

“I love the proximity to the beaches, the greenery, the North Shore parks … everything up here,” Henderson says. “There’s nothing like that Midwest feel you get here. The people? Everyone is nice, kind, and happy to talk with you.”

Henderson is in a good spot today, both in her environs and with her health. Her clarion message: “Listen to your gut and don’t be afraid to talk about it with anyone.”