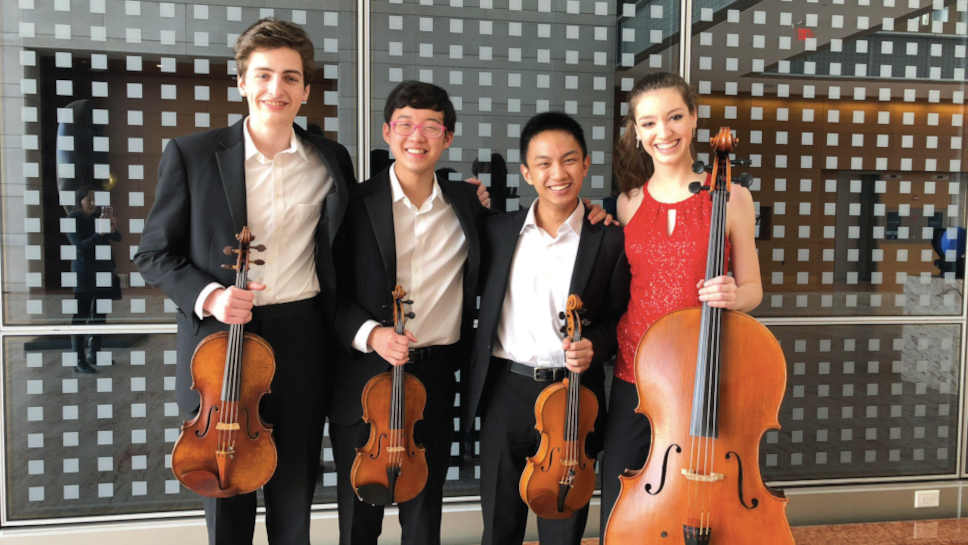 The Kairos String Quartet is one of many that participated in Music Institute of Chicago’s Virtual Gala via pre-recorded performances.

The Music Institute of Chicago celebrated 90 years of innovation, access, and excellence in music education as it welcomed more than 450 viewers to its 90th Anniversary Virtual Gala on May 10. Contributions totaled more than $825,000 from about 250 donors before and during the event, which was free to view. About $51,000 was raised as the event streamed.

The Institute leads people toward a lifelong engagement with music through teaching, performances, and service initiatives that educate, inspire, and build strong, healthy communities. Since its founding in 1931, its commitment to innovation, access, and excellence has served as an important community resource and helps to ensure music is available to everyone.

Each year, the Music Institute provides personalized music instruction to more than 1,500 students, regardless of age, level of experience, or financial means. It operates eight Community Music School locations in the region, including Chicago, Downers Grove, Evanston, Lake Forest, Lincolnshire, and Winnetka, as well as offering teaching online.

Mark George, the Music Institute’s President and CEO and a resident of Wilmette said the event raised slightly more than in years past despite the challenges of hosting this year’s Gala virtually.

“We have a very positive mission leading people toward a life-long engagement with music, teaching, performing, and service and people really respond to that,” George says. “I think right now especially because people are looking to engage, they’re looking to be positive.”

George says the combined efforts of professional staff and volunteers, as well as a distinguished group of honorees, also contributed to the Gala’s success.

“We have a fantastic team, a great staff, talented faculty, students and their families, and then tons of volunteers from the Board of Trustees to the Co-Chairs and Vice Chairs who worked really hard to make the

event a success,” he says. “We had a worldclass artist that we honored, Zubin Mehta, and then a really beloved couple who are philanthropists on the North Shore and in Chicago, Bill and Linda Gantz.”

The Dushkin Award, established more than 30 years ago and named for the Music Institute’s founders Dorothy and David Dushkin, recognizes international luminaries in the world of music for their contributions to the art form, as well as to the education of youth. Maestro Zubin Mehta was music director of the Israeli Philharmonic Orchestra for 50 years, becoming conductor emeritus in 2019. He cultivates young musical talent worldwide as co-chairman of the Mehli Mehta Music Foundation in Bombay, with his brother Zarin, and the Buchmann-Mehta School of Music in Tel Aviv.

Considering the cancellation of the 2020 Anniversary Gala due to the pandemic, the Music Institute also offered special recognition to the 2020 award recipients: Dushkin Award honoree and pianist Evgeny Kissin, Cultural Visionary Award for Chicago honoree Helen Zell, and Richard D. Colburn Award for Teaching Excellence honorees Arlene Stokman and Abraham Stokman, all of whom spoke during the event. Funds raised from the Gala provide the single-largest source of support for need-based financial aid and merit scholarships, as well as crucial underwriting for music education programs, performances, and service initiatives that benefit thousands of individuals throughout the Chicago region each year.

“The Music Institute to me has always felt like home where I’ve been able to connect to people who are passionate for one thing, and that’s music,” says Cheng. “It’s a safe place where I can forget all my troubles and just make music.”

George says he’s thankful that even in these difficult times people are willing to support the organization and its mission. “I feel blessed that people came out to support our mission, especially in such a challenging year,” he says. “We feel happy about it, but we also feel blessed.”

For more information about the Music Institute of Chicago and how to support its mission, visit musicinst.org