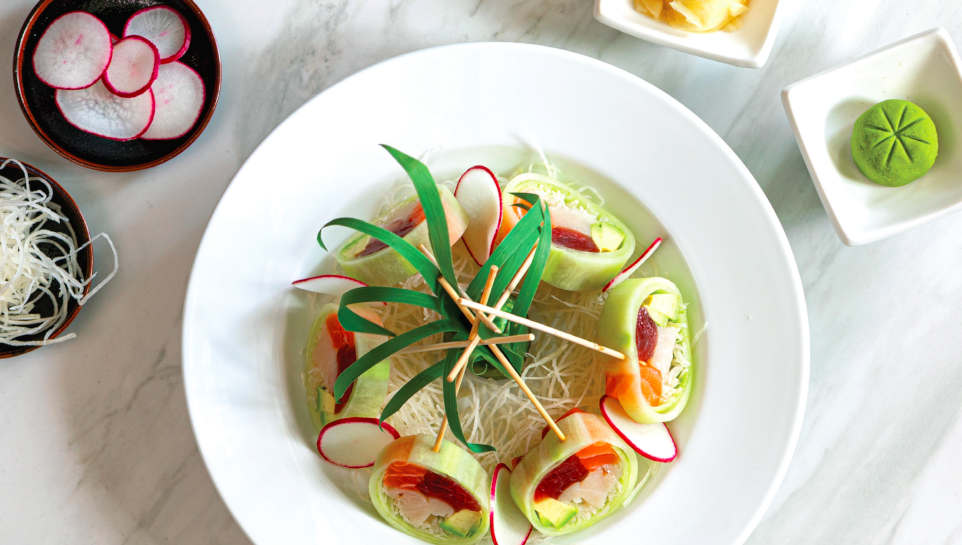 Tucked between a juice bar and optical shop on Winnetka’s bustling Chestnut Street, Little Lan’s is tiny, but resilient—just like it’s owner. Barely five-foot-two, Chien Lan Pi, a 4th-degree black belt in Tai Kwon Do, and savvy restaurateur, has kept the place going seven days a week for decades with the help of her three sons.

Now in its 29th year in the business, the restaurant has served up comforting Mandarin and Szechwan classics from the start. But in a graceful post-COVID pivot, the restaurant just added a bright new offering  you won’t want to miss—gorgeous sushi from Chien’s son Peter Ma.

Brought to table on broad white plates, Ma’s specialty sushi creations are eye popping. And the sophisticated flavor compositions are a testament to the 20 years Ma has spent honing his craft. The menu’s simple description of his sushi doesn’t prepare you for the creativity that comes to table.

His Spicy Tuna App, for example, is a tower of delicately spiraled fresh avocado atop a composed stack of diced tuna mixed with chopped macadamia nut and chives centered in pool of dancing orange and green sauce dots that morph into yin-yang spirals with a jiggle of the plate. 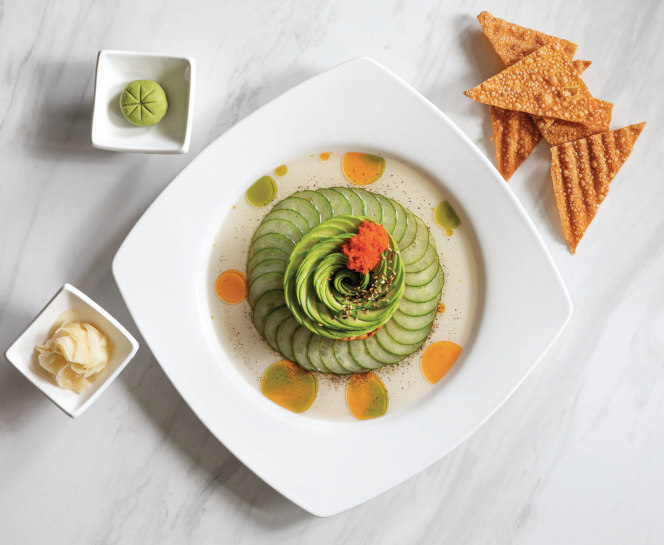 From there, it’s hands-on fun. You’re meant to scoop and eat the mix with crispy won ton crackers that come on the side, making for a nice mix of spice, cool, and crunch. 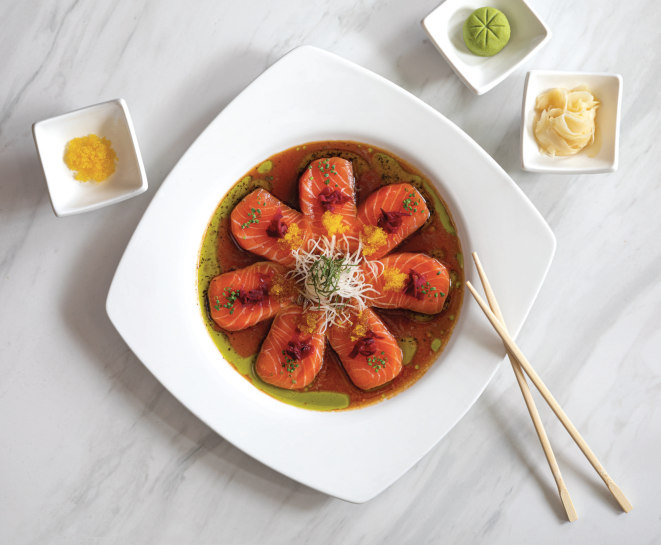 For my favorite—the Salmon Black Pepper Yuzu sushi plate, slices of fresh salmon are composed in a floral pattern over a pool of black peppered yuzu sauce, with pickled beet, yuzu tobiko (flying fish roe), and frizzled daikon accents. I also tried the whimsical Lollipop Roll, pretty rounds of cucumber-sheet-bundled tuna, salmon, yellowtail, avocado, and daikon speared like lollipops and served with spicy habanero ponzu sauce. Teeny tuna poke tacos with cabbage slaw are also very good, and there is a full range of classic and specialty sushi rolls to choose from as well. 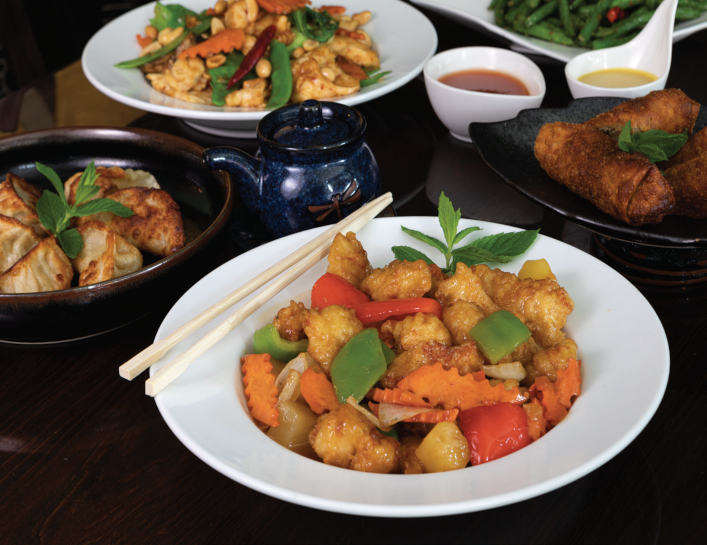 Ma’s sushi career started 20 years ago when he worked with Sai Cafe, Sushi Naniwa, and Bob San’s, all owned by Chien Lan’s two younger brothers, Bobby and James. After seven years training with his uncles at those establishments, Ma became Executive Sushi Chef for Rick Tramonto’s RT Lounge in Wheeling at the Westin Hotel.

“Then, in 2010 my family and I opened up Sushi Amour across from Little Lan’s,” says Ma. “But unfortunately, the recession of 2010 closed that restaurant down.”

This was devastating for Ma, who ended up leaving Chicago and moving to Colorado. There, Ma helped open restaurants in Boulder and Denver, and landed jobs in Beaver Creek and Vail at several fine dining sushi bars.

When Chien proposed the idea of bringing Ma’s sushi show back to the family business, Peter agreed, and the results are waiting for you.

“After nearly 30 thirty years in Winnetka, we really wanted to brighten up our offerings, and there’s no time like the present,” says Ma.

Chien’s extended family has been in the restaurant business in Chicago since the ‘70s. Chien, her two brothers and sister Dee, immigrated here from China all with cooking experience. Between them, the siblings opened more than a half dozen restaurants throughout the city and suburbs. Most are still operating today in their original locations.

Little Lan’s originally opened in Wilmette and moved to its current location in 1992. Over the years, the menu has featured the same recipes Chien brought with her from China, with some new additions along the way.

With four well-spaced tables, the dine-in area at Little Lan’s is small, but for the specialty sushi, do try to be there—take-out doesn’t do it full justice. (The classic and specialty rolls, however, travel better.)

For a full meal, follow the sushi up with Chinese favorites you’ve come to expect from Little Lan’s. The pot stickers, filled with minced pork and pan fried, are nicely plump, if a little thick in the wrapper department. The Kung-Pao Chicken (you can also have it with beef, pork, or shrimp) came with the promised bok choy, crinkle cut carrot, mushroom, zucchini, water chestnuts, and peapods, and though billed as a spicy dish, was easily approachable.

We were pleased that the veggies were crisp tender and not overcooked. Rounding out our meal, we tried the Sweet & Sour Chicken, batter dipped and deep-fried chicken breast chunks with pineapple, carrot, green and red peppers in a sweet-sour sauce that added flavor without being cloying. We added some extra greenage with a bowlful of crinkly-good Szechuan Garlic Green Beans. With another three dozen options to choose from on the menu, there is room for lots more exploration.

Located at 544 Chestnut Street in Winnetka, Little Lan’s is open seven days a week. Call 847-446-9988 for reservations, or visit littlelans.com to order to-go. Delivery is available from 5 to 9 p.m. every day; carryout from 4 to 9 p.m. Monday through Saturday, and from 4 to 8 p.m. Sundays.