Remember your first sip of coffee?

Nick Yehle certainly does, and he bets that he scrunched up his face more than you did.

“I was a freshman in high school,” recalls the 2016 Lake Forest High School graduate. “My mom (Catherine) was a coffee drinker. I went up to her and said, ‘I think I should start liking coffee at this point in my life.’ I tried it. It was terrible. It was brown, hot, weird tasting.”

But a few hours later, Yehle had a hankering—for another cup of Joe.

Yehle has been a caffeinated caffeine fan ever since. And now he and business partner Joey Jones, a native of Saint Paul, Minnesota, plan to jolt the world with their first product, JoGo, the original coffee brewing straw. It’s a sleek and durable stainless steel straw—barely larger than an unused pencil—with an insulated silicone mouthpiece.

Consider it the antithesis of the vessel used for cowboy coffee, which is French press coffee without a filter and made over an open flame on the trail or at a campsite. It takes 45 minutes to prepare, at least. The JoGo straw ($20) features a highly efficient filtration system at the base of the straw.

“We are two outdoor educators who were tired of not having an easy way to enjoy our favorite beverage while leading canoe and backpacking trips in the Great Northwoods,” says Yehle, 23. “We created a simple and high quality new way to brew coffee that is both fun and easy to use.” 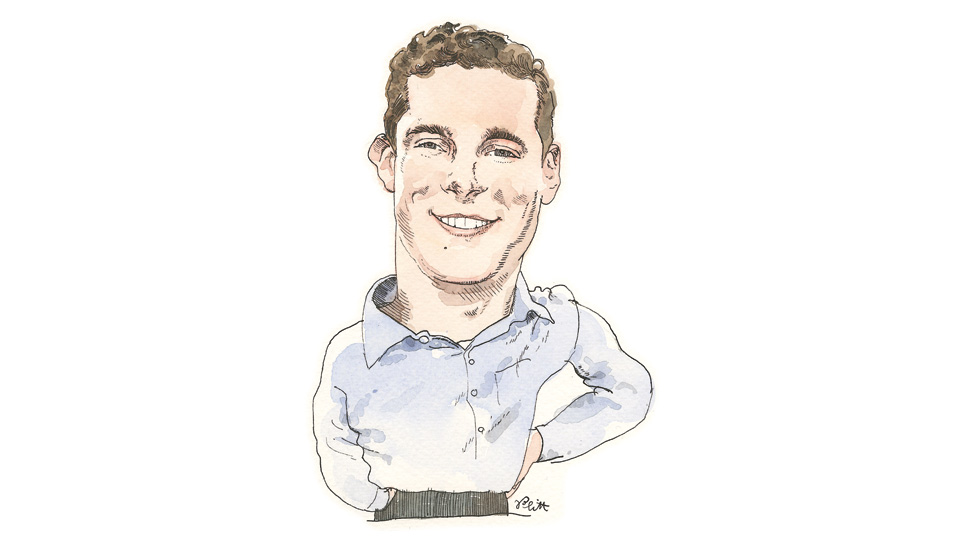 Nick, who lives in Lake Forest, and Joey launched a Kickstarter campaign for their product on April 14, with the goal of generating $10,000. Backers pledged more than $10,000 … in the first 58 minutes.

“My dad (Jeff) and I, together, watched the pledges add up in that first hour,” say Yehle, who majored in economics and minored in computer science at Denison University in Granville, Ohio.

The JoGo co-founders ended the Kickstarter campaign exactly one month later. The numbers, on May 14: 9,200 backers from a combined 80 countries; $378,000 in pledges; and 15,000 JoGo straws preordered, set to be distributed this fall.

“Mind-blowing,” Yehle says of the response. “I still have my notes, the ones I wrote down in a notebook in 2018, when Joey and I sat around talking about this idea in the Canadian wilderness.

He had completed a 28,000-mile solo motorcycle expedition from Minnesota to Argentina. A family in Argentina gifted Joey a bombilla—a straw with a filter originally designed in the 16th century for drinking loose leaf Yerba Mate tea.

“Making coffee in the outdoors required bulky brewing hardware,” he adds. “The epiphany for us was the bombilla. But we had to make it fine enough to filter coffee. The filtration system is simple, built to last, and it makes French press style coffee with the ease of instant. I remember saying to Joey, ‘Okay, let’s do this.’”

Yehle played rugby and competed for the swimming and track and field teams during his LFHS days. He swam the 50- yard freestyle and 100-yard butterfly events. He threw the discus for the Scouts’ track and field squads. But his true passion outside the classroom in his formative years was camping in the summertime at Camp Koochi-ching in International Falls, Minnesota, from the ages of 8 to 18.

He later served as a camp counselor there for three summers.

“I’m adventurous, and I have an intense sense of curiosity,” Yehle says. “I fell in love with the outdoors right away. It’s peaceful, you get to look at trees, and learn all kinds of things, like how to read maps, how to cook, how to make a friction fire, and why mosses on rocks face east (so the plants won’t die). There’s camaraderie in camping; on many trips I paddled with others for hours and hours. There’s also an individual aspect of camping that’s appealing to me.”

A young Nick Yehle was an idea boy. He’d run each idea by his dad and seek feedback. He’d also retain those ideas in his phone. And—surprise, surprise—he took the business incubator class at LFHS.

“Joey and I have a ton more product ideas— ideas we don’t want to share with the world right now,” Yehle says. “Our focus now is on JoGo and informing as many people as possible worldwide that this is a viable method of brewing coffee. I worked 38 straight hours before the Kickstarter launch, and now it’s not unusual for me to work 12 hours a day six, sometimes seven, days a week.

“I’m loving the process of building our brand and everything else about JoGo.”

Five percent of JoGo profits will go to Survival International, a human rights organization that fights for tribal peoples’ survival. Founded in 1969, it stops loggers, miners, and oil companies from destroying tribal lands, lives, and livelihoods across the globe. It also lobbies governments to recognize indigenous land rights.

“To get to the point where we are now with JoGo, it took a lot of people,” Yehle says. “It took family and friends and other personal connections. We also have an amazing team of advisors. I’ve told acquaintances about what I’m doing and some of them have said, ‘I could never do that.’ My response to them has been, ‘Really? I think you could.’

“I’ve always believed that if you truly want something, you have to go for it.”