Mike McIntyre was in a business class at the University of Indiana when the professor assigned each student to come up with a six-word life motto.

“It was a random challenge, to a class of about 300 in an auditorium,” recalls McIntyre, who turns 30 on June 4, and has lived in Lake Forest since October 2020. “I thought it would be easy and take no more than a few minutes. I ended up spending an hour on it. I reflected a lot.” 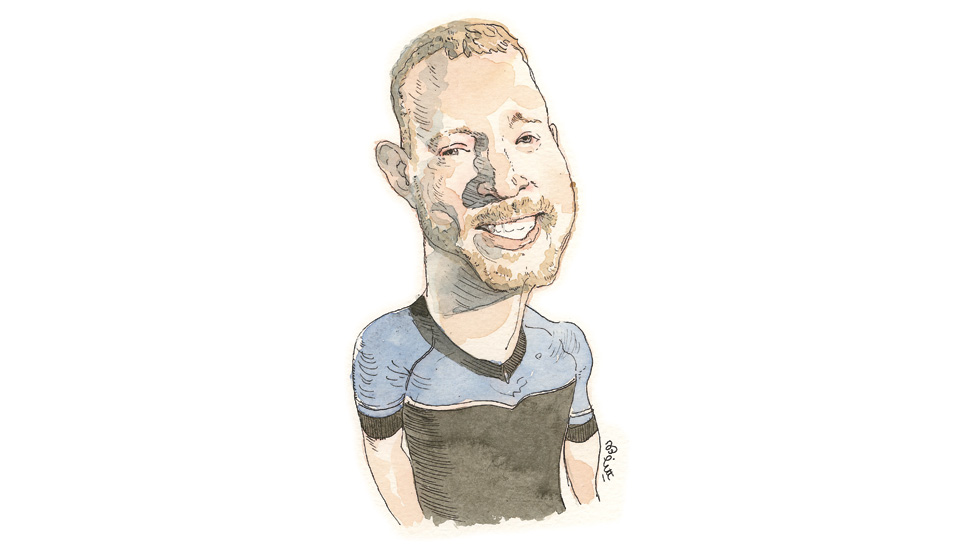 His life motto then:

McIntyre’s “niece,” Reese, an extended family member from Munster, Indiana, had an airtight excuse for not being able to think up a motto 12 years ago. She was three months old, with a vocabulary limited to a gurgle and the occasional “goo.”

In no particular order.

“At an age when she should’ve been focusing on lifting her head during ‘tummy time’ or learning to reach for toys, Reese was battling for her life,” McIntyre notes on his Leukemia & Lymphoma Man & Woman of the Year (MWOY) fundraiser web page.

An oncologist informed Reese’s parents, Tony and Kelly, that their tot had a 20 to 45 percent chance of survival. Reese underwent radiation and a stem cell transplant. She beat leukemia. Now 12 years old, she is cancer-free and smiles, on average, six times per minute.

Her “Uncle” Mike— a Weber- Stephen Products manager since 2019—couldn’t be happier, but while researching cancer, he learned in the last 40 years only four cancer drugs had been created specifically for children.

“That fact blew my mind and pained me to the core,” says Mc- Intyre, a Leukemia & Lymphoma Society (LLS) advocate who has a passion for finding a cure for pediatric cancer. “I remember thinking, ‘Too many young kids during that time must have had to undergo treatments designed for adults.’ That didn’t sound like the best direction to me.

“We can do more,” he adds. “We have to do more. Reese is one of the fortunate ones, but not every child wins their battle with cancer.”

campaign on March 25. The 10-week philanthropic competition ends June 25, with the funds earmarked to support blood cancer research. His goal is to raise $100,000.

“I got involved with LLS by participating in its Team Training endurance athletics program, taking on challenges and fundraising efforts in honor of Reese, who continues to be my inspiration says McIntyre, who competed in his first triathlon in 2018, in Florida, and then traveled to Madison, Wisconsin, to race in his first Ironman in 2019.

The start of the 112-mile bike leg in the latter was a rough one. In mile eight a whipping crosswind knocked McIntyre to a stretch of gravel along the course, mangling his bike’s handlebars at impact. He had to wait an hour for a mechanic to fix his bike before pedaling again.

“While waiting, I tried not to panic or lose my mind,” McIntyre says.

At a half-Ironman in Miami, he qualified to compete for Team USA (30-34 age group) at an International Triathlon Union World Cup race in the Netherlands this September.

A former sprinter as a freshman and a subfive- minute miler as a senior for the Munster High School boys track and field program, McIntyre opted to “return to my athletic roots” when he looked at himself in the mirror one day in 2017. He was working for the Big Four accounting firm KPMG at the time.

“That’s when I knew it was time to get rid of my ‘consulting pounds,’ ” McIntyre says. “I needed to change. I was not happy. Living the way I was living was not sustainable. I’d just finished a KPMG project in North Carolina, working 80-hour weeks for six months. I was physically and mentally drained.”

KPMG hosted an event at which Chicago Bears assistant trainer Will Rogers, and his wife, Kristin, detailed their daughter Charlotte’s cancer journey. Charlotte was diagnosed with a blood cancer when she was eight months old.

“Charlotte’s story tugged at my heartstrings,” says McIntyre, who wound up training with endurance athletes for Team Charlotte. “It reminded me so much of what Reese and her family endured.”

Will Rogers later invited McIntyre to the gala that honored the 2019 Leukemia & Lymphoma Society Man and Woman of the Year winners. Winner Will Rogers had raised $411,000. Rogers told the audience that the day before he wrapped up his fundraising campaign, Charlotte rang the bell, signifying her last day of cancer treatment.

“Lots of teardrops flowing at the night of that gala,” McIntyre recalls.

A major influence on a young Mike McIntyre was his father, also named Mike, who worked as a branch manager at banks in northwest Indiana. Rotary, Kiwanis, Lions—the elder Mike was involved in clubs that focused on community.

“Dad would drag me with him to meetings and events, but I was fine with that because I enjoyed the experiences and watching him interact with everybody,” says the son, who moved with his family from south suburban South Holland to Munster in the fourth grade. “Helping charitable organizations has always been important to him. My dad is very outgoing, being Irish and all, and he has leadership skills.

“People listen to him,” he adds.

Have you heard the latest about Reese? Let her bursting-with-pride “uncle” fill you in.

“So entertaining,” McIntyre says. “She’s also the smartest, kindest, sweetest kid I’ve ever known. Her goal is to be an author some day. Not a typical goal for someone her age. But isn’t that a great one?”

For more information about Mike McIntyre’s Leukemia & Lymphoma Man and Woman of the Year campaign, and to donate to it, visit pages.lls.org/mwoy/chi/chicago21/TeamReese.