When Frank Windes, Winnetka Village Engineer from 1898 to 1940, helped found the Winnetka Historical Society in 1932, he probably didn’t imagine the village would  become something of a Midwest version of Hollywood.

The Breakfast Club, Ferris Bueller’s Day Off, Risky Business, Uncle Buck, and, of course, the original Home Alone, which starred Macaulay Culkin as stranded 8-year-old Kevin McCallister whose family jets off to Europe without him, were all at least partially filmed in Winnetka.

Winnetka’s history as a backdrop for these films—many of them written and directed by the late John Hughes of Lake Forest—will be the theme of the Winnetka Historical Society Annual Virtual Gala: “Home Alone Together,” on June 10.

The gala will feature a presentation by documentary filmmaker and Winnetkan John Newcombe on the making of Home Alone and other films set on the North Shore. Attendees will hear stories from family members who lived in the Home Alone house during the shoot, view never-before-seen video footage taken by a neighbor, and discover the role local actors and extras played in the making of the beloved film. 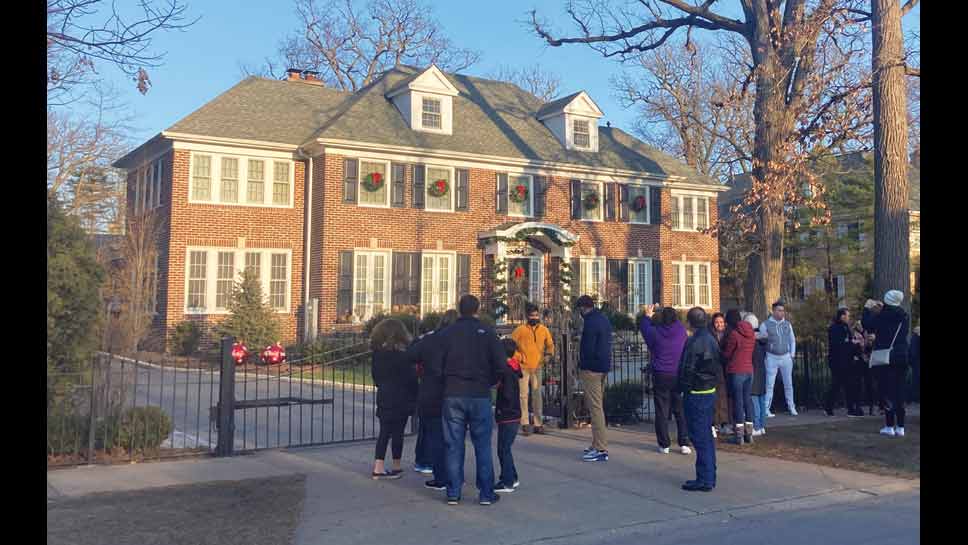 Fans pay homage to the Winnetka house where the iconic Home Alone movie was
filmed. PHOTOGRAPHY BY HOLLY MARIHUGH

“It’s a pretty famous house and the house itself is really a character in the movie. It plays a critical role in that film and I think that’s why so many people want to see it,” says Winnetka Historical Society Executive Director Mary Trieschmann. “All of the indoor scenes were filmed in that house or in an identical replica they built on a set in Hollywood.”

“John put together a wonderful presentation with interviews from the homeowners along with clips from the film, and we’re really excited to share that story as our mission is to not only preserve the history of Winnetka but to show it off.”

The Winnetka Historical Society was founded by a group of engaged Winnetka citizens, including Windes, who was keenly interested in the history of the village. The group interviewed residents and collected artifacts, storing them in their basements or wherever else they could find a spot.

“They would meet and share the stories and history with the Village whenever they had the chance,” Trieschmann says.

Since that time, the Society has lived in a variety of places but purchased a historic Victorian home at 411 Linden about 20 years ago, saving it from demolition in the process. The Society also owns and operates the Smith Burnham Log House, which it inherited in 2000 and moved to Crow Island Woods, also preserving it from demolition. The Smith Burnham Log House is on the National Register of Historic Places.

In addition to preserving and maintaining the two historic properties and offering a home to display artifacts, which number over 30,000, the Society also maintains files with information about properties in Winnetka.

“We have a file on every house in Winnetka so, for example, if you purchased a home and wanted to know the history of the house, you could look up your address and we have a file on it,” Trieschmann says. “It includes real estate documents or other documents that have been saved over time.”

The organization raises a significant portion of its budget from individual donors, and the annual Gala is a key fundraising event.

“Ninety percent of our funding comes from Individual donations and the Gala brings in about 50 percent of that,” Trieschmann says. “So, it’s really important.”

The Winnetka Historical Society Virtual Gala: Home Alone Together will stream at 7 p.m. on June 10. Individual tickets are $250 and can be purchased at winnetkahistory.org.