The scene unfolds around a dining room table at a family gathering in Hoffman Estates in 2019. Beth Lane is surveying the room, asking her aunts, uncles, siblings, cousins, nieces, and nephews to tally the size of their immediate family.

Estimates are offered, most ranging between the 20s and the 40s. Then Lane reaches for a collection of Post-it Notes, each representing a family member, and then informally addresses the room.

“I premise this by saying that if Paula and Arthur Schmidt had not done what they did, the people in my hand wouldn’t be here,” says the former Wilmette resident and graduate of New Trier Township High School.

One-by-one, Lane puts each Post-it Note on the table. In total, there are 72. Seventytwo lives.

The scene is included in what will be a feature-length documentary titled Would You Hide Me? that Lane is directing about the remarkable survival of the seven Weber children who escaped Nazi Germany and migrated to America in 1946. The youngest of those children is Lane’s mother, Ginger.

The story of the seven Weber children who journeyed to America from Germany was first told in an article in The New York Times when they arrived. But there was, and continues to be, much, much more to the saga. The Times noted that it had been the largest group of children to come to Ellis Island unaccompanied by adults, and once processed, they would be fostered in homes in Chicago.

What the Times article did not mention was that two Christian farmers, Paula and Arthur Schmidt, had hidden all seven children in their home in Germany for two years. 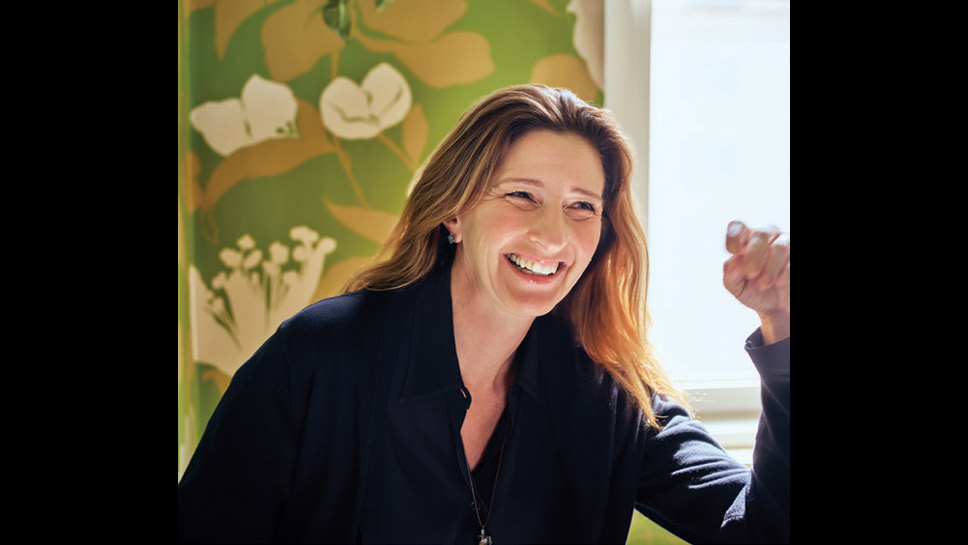 Former Wilmette resident Beth Lane (shown above) has made a documentary about
her family’s escape from Nazi Germany. Her mother and siblings (shown below) are
shown at a children’s center before emigrating to the U.S.
PHOTOGRAPHY BY CHAD BATKA 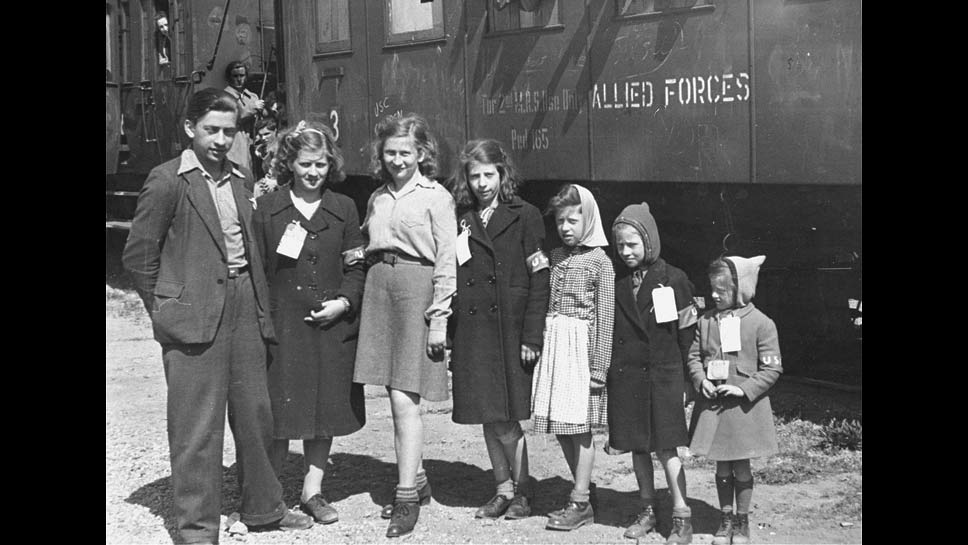 Former Wilmette resident Beth Lane (shown above) has made a documentary about
her family’s escape from Nazi Germany. Her mother and siblings (shown below) are
shown at a children’s center before emigrating to the U.S.
PHOTOGRAPHY BY CHAD BATKA

When production first started on her film, Lane titled it Worin, after the town where her mother and siblings were hidden by the Schmidts. She changed the name to Would You Hide Me? to capture the moral conundrum the Schmidts faced and to challenge viewers to consider the question in our current cultural and political context.

“The real question that we’re asking isn’t so much about whether someone would hide me, but would I ever have the courage or bravery to hide someone?” Lane says. “What’s intriguing to me is that there’s a spectrum about how far you’ll go to protect anything—your reputation or another human being. I think that’s a fascinating way to pose the question.”

Lane’s family story has made her somewhat of an accidental filmmaker. Born in Lakeview and raised in Wilmette, she grew up interested in dance and theater. Her mother is a former ballet instructor and ran a dance studio in their garage in Wilmette while Lane was young. She participated in theater productions throughout her middle school and high school years, including the Joyce and Byrne Piven Young People’s Theater in Evanston.

“Even at the age of 6, I was already dancing a lot. It was all from my mother, the dancer, and so my love of the arts definitely came through my mother,” she says. “My dad was a lawyer, but he sang in the bar show every year and he sang in the choir at synagogue.”

Lane says her mother likely got her affinity for the arts from her adoptive parents, who were well-established in Chicago and had the resources to give her mother a well-rounded upbringing.

“My grandfather was Chief of Neurosurgery at Michael Reese hospital, but he was there with his top hat and tux at the opera. My grandparents just had fun,” Lane says. “My grandmother was a painter and sculptor and wore outfits that were on the cover of fashion magazines. It was very theatrical and being an artist in my family was something that was just so normal.”

After graduating from New Trier, Lane went to Syracuse University to study musical theater, but upstate New York wasn’t to her liking and she eventually finished her undergraduate degree in English from the University of Michigan in Ann Arbor.

She moved to New York and worked with William Esper, the notable acting teacher to many performers, including Larry David, Jeff Goldblum, and Kathy Bates. From there, she landed roles in theater productions throughout the country. She is an actor, comedian, and jazz singer, not to mention wife and mom to three boys.

It wasn’t until she moved to Los Angeles in 2007 and took an audition for the MFA Program at UCLA that the idea of filming a documentary about her mother and siblings began to take shape. She applied to the program with the goal of eventually teaching and was accepted. It was back to school in her 50s. 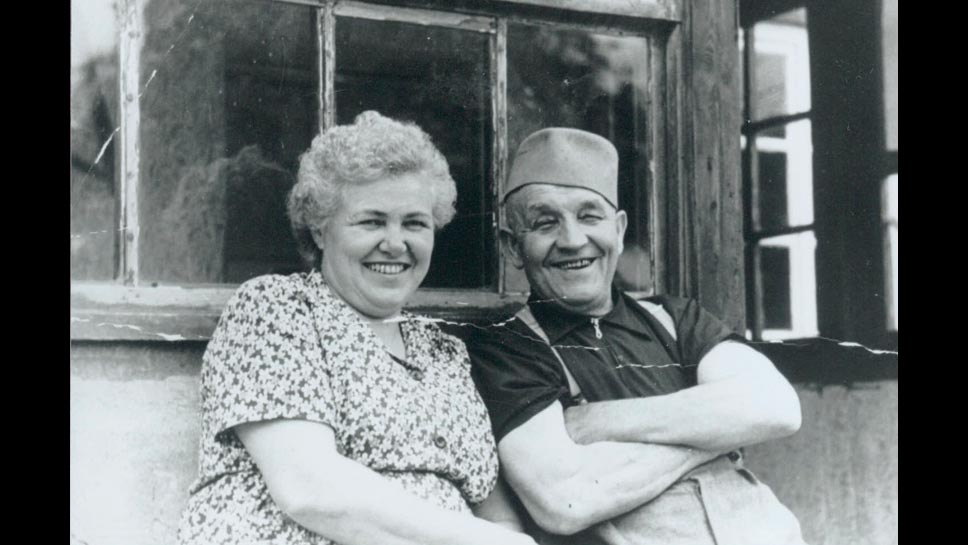 Paula and Arthur Schmidt hid the Weber children for two years on
their fruit farm in Worin. 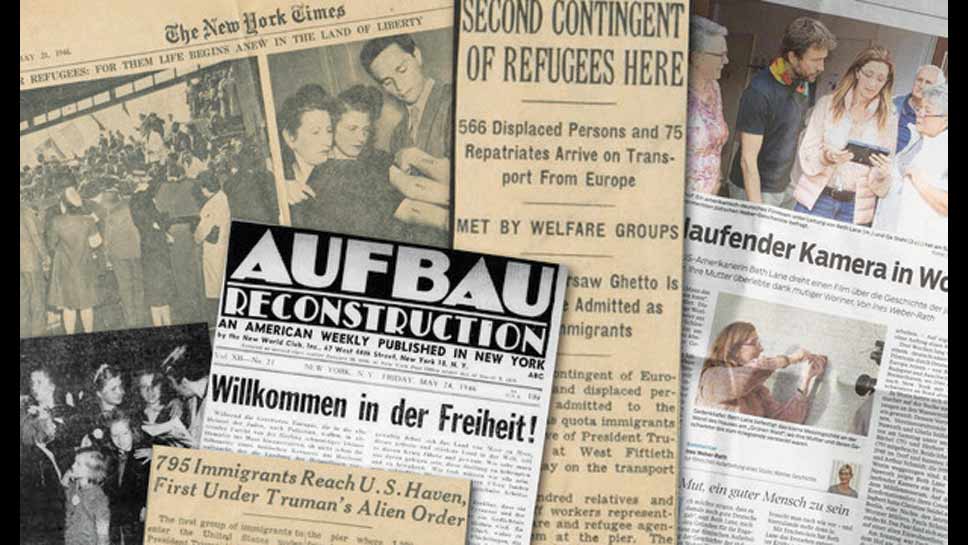 “They offered me a place in a class with eight students, all in their 20s. It was perfect,” Lane says. “So, I go to UCLA thinking the whole time that when I come out of there, I’m going to be a professor.”

But in between her second and third year of the program, Lane’s Uncle Alfonse passed away. A physicist, he had been the only one of the seven siblings interested in researching their past in Germany.

“He had traveled around the world presenting research papers and had worked for the government in Washington, D.C., “Lane says. “He was a highly intellectual man who was accustomed to doing research.”

Before his death, Lane’s Uncle Alfonse had travelled to Worin in Germany to meet with the town historian in an effort to reconstruct the experiences of he and his siblings with the Schmidts. The trips to Worin were primarily to gather evidence for an application on behalf of the Schmidts to Yad Vashem, the World Holocaust Remembrance Center in Jerusalem, which awards the “Righteous Among the Nations” to non-Jews who risked their lives to save Jews from extermination by the Nazis. The Schmidts were honored with the award in 2018, which is when Lane began principal photography for her film.

Lane is, in a way, finishing what her Uncle Alfonse started. His vision of uncovering the past has become her vision of telling how her mother’s, and her mother’s siblings’ future unfolded in America. It’s a rich tapestry of connections lost and found.

On Thursday evening, Lane hosted a private screening of her unfinished work for family and donors at the Logan Theater in Chicago and to mark the 75th Anniversary of the Webers emigrating to America and Chicago. Three of the seven siblings are gone now.

In a time when Holocaust survivors are in the sunset of their lives, Lane feels it is incumbent upon her to continue the work of Holocaust awareness and to “never forget.”

“Would You Hide Me?” is currently in post-production. For more information or to donate, visit wouldyouhideme.com.