Victoria Fuller was 5 years old when she and a boy were playing on a hillside in Pennsylvania and got stung by bees.

The young humans survived. The bees did not.

“I was worried about the bees,” Fuller recalls. “I was hopeful that they’d go to heaven, so I drew bees as angels and then added halos.”

Victoria’s late father, photographer C.J. “Tom” Fuller, saw his daughter’s artwork and chose it to double as the family’s Christmas card that year.

Decades later, Victoria Fuller—a painter, sculptor, natural science illustrator, and curator, living in the Chicago neighborhood of Bucktown—is concerned about species on the brink of extinction. The last male northern white rhino, named Sudan, died in Kenya in 2018 at age 45. Only two females of the subspecies remain: Najin and Fatu.

Her inflatable sculpture of a northern white rhino, along with her “Many Suns” in radiating sphere form, can be viewed at The Art Center Highland Park (TAC) exhibition “Ephemera: The Power of Impermanence” through June 12. Fuller, in her TAC debut, is a featured artist and a guest juror.

The rhino sculpture inflates and deflates in a three-minute sequence, “showing its glory and decline,” Fuller says.

It continues to pain and confound Fuller that animals become extinct largely because of poaching and other cruel human activities.

“My work focuses on systems of man and nature and the impact of that nexus, revealing the phenomenon of life and the science behind it,” says Fuller, who was born in Allentown, Pennsylvania, grew up on Willow Brook, the family farm near Catasauqua, Pennsylvania, and attended The Masters School in Dobbs Ferry, New York. “My figurative representations of nature coexist beside object-based artwork, with the two separate bodies of work intended as complementary rather than competitive.”

Fuller’s striking sculpture “Shoe of Shoes” marvels onlookers in Clayton, Missouri. Created in 1999 and a part of the Pier Walk exhibition in Chicago that same year, it’s more than a large high-heeled woman’s shoe in front of the Brown Shoe office building; it was made from about 2,000 cast aluminum shoes.

“It represents the collective pain of women who wear heels for beauty,” Fuller says.

Her large-scale public sculpture “Global Garden Shovel” was commissioned by Sound Transit and installed in the city of Seattle at Columbia City Station in 2010. It stands 35 feet and could easily pass for a spade in Paul Bunyan’s airplane-hangar-sized toolshed. “I’d researched the Seattle area, including Rainier Valley, and discovered everyone there is into gardening,” Fuller says. “Everywhere I looked I saw a gorgeous garden. Much of the sculpture’s design depicts plants from all over the world. The variety of the plants featured on the shovel represents the ethnic diversity of the area.”

The Michigan city of Ann Arbor purchased Fuller’s massive “Canoe Fan” sculpture in 2019 and kept it mounted along the Huron River in Gallup Park. Imagine nine large canoes forming the shape of a hand fan.

“Or a peacock spreading its feathers,” Fuller says. 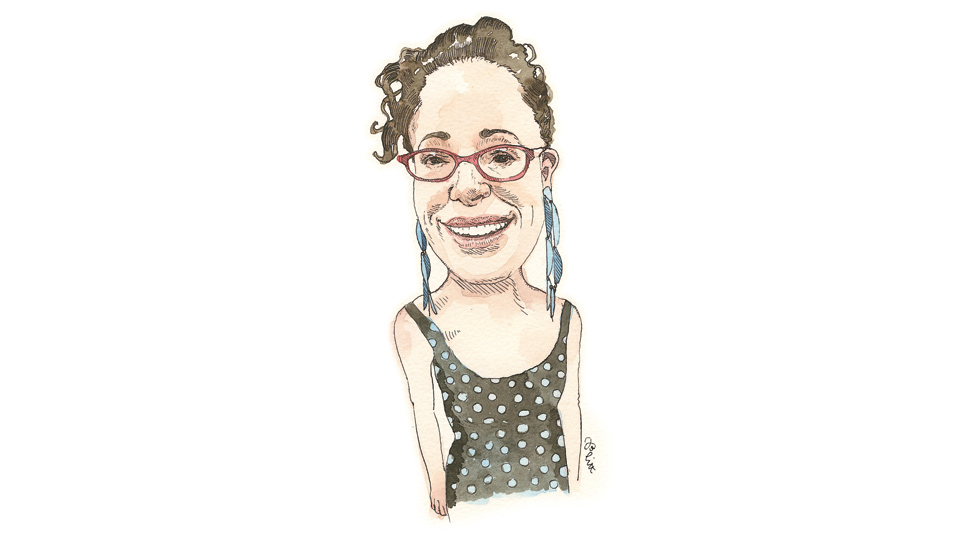 Fuller’s early art influences were her father and mother, Alexandra, who minored in art at Bucknell University in Lewisburg, Pennsylvania. C.T. Fuller’s photographs appeared on the covers of The Quarter Horse Journal, and his appealing ads ran on the back of the magazine. In 2001 he was inducted into the American Quarter Horse Hall of Fame.

“My parents encouraged my interest in art,” says Fuller, who moved to Chicago in 1992 and earned a graduate degree from the School of the Art Institute of Chicago. “I also remember entering an Easter egg contest and adding legs to the eggs so that they’d look like frogs. After that I made a portrait of a student sitting across from me in class; it looked just like her.

The late French American painter, sculptor, and writer Marcel Duchamp emerged as one of Fuller’s major inspirations. His work is associated with Cubism, Dadaism, and conceptual art.

Fuller received fellowship awards from the Illinois Arts Council and from the Colorado Council for the Arts and Humanities. She completed artist residencies at Lake Forestbased Ragdale Foundation and at Sculpture Space. The recipient of the 2020 Dean Alan Olson Purchase Award at the Rockford Art Museum and Best of Show honors at the 2021 Evanston and Vicinity Biennial, Fuller landed the prestigious Department of Cultural Affairs and Special Events (DCASE) Independent Artist Project Grant in 2019.

Between 300-500 artists had applied for the DCASE grant.

“What an honor, to have been chosen,” says the humble Fuller.

Compliment her on the brilliance of her work, particularly the involved pieces, and she’ll quickly praise the other hands and minds that made them possible.

“It sometimes takes a team of people,” Fuller insists. “For ‘Canoe Fan,’ I couldn’t have created that alone; I needed help. I relied on assistants and technical people and aluminum experts.”

The other featured artist of the TAC’s exhibition “Ephemera” is Nate Baranowski, also based in Chicago. He’s a street painter, muralist, and fine artist, specializing in creating eye-popping 3D artwork.

“I’m thrilled,” Fuller says, “that I was asked to be a featured artist, as well as a guest juror, at a center that offers classes to the community and engenders and promotes creativity. It’s a powerful exhibition, with powerful messages. But it’ll bring joy, too. Many of my suns—you’ll see eight iterations, including one with yellow rubber gloves and another with (resin-cast) octopus arms—are intended to be playful.”

Visit victoriafullerart.com for more information. The exhibition “Ephemera: The Power of Impermanence” at The Art Center Highland Park (TAC) runs through June 12. TAC, 847- 432-1888, is located at 1957 Sheridan Road, Highland Park.