Had you been near Watts Park’s Bronco Field in Glencoe and closed your eyes earlier this month, you would’ve sworn you had stumbled upon a fireworks show.

Intermittent waves of “oohs” and “aahs” from youngsters and adults filled the air, some even drowning out dog barks.

But it was May 8, not July 4, and home runs—blasted by 12U and 14U baseball players—generated those resounding reactions from a knot of spectators on a chilly afternoon.

The Glencoe Baseball Association (GBA) hosted a Jr. Home Run Derby, featuring 20 12U batters and 12 14U sluggers. Contestants had to either reside in Glencoe or play on a GBA House League team in order to vie for Home Run King status. In Round 1 for both age-group divisions, each participant had two minutes to launch homers over a fence located approximately 200 feet from home plate.

Pitches were delivered by a machine on the mound.

“This is a fabulous opportunity to watch these kids compete in a sport they love,” said Colleen Meyers, bundled up and sitting in a bank of bleachers behind home plate. “It’s great for the community. Everywhere I look I see camaraderie. My son (Trey) is at his happiest when he’s on a baseball field.

“And a mother is happy,” she added on Mother’s Day Eve, “whenever her children are happy.”

Trey Meyers, a U14 derby participant and a 6-foot-3 eighth-grader at Sacred Heart School in Winnetka, gave his mother 16 reasons to beam on May 8. That was the number of home runs he had amassed in the U14 finals to capture the title in his age group.

Mason Bloom—who had connected for a U14-best 14 dingers in Round 1—finished with a runner-up total of 11 in the finals. Jack Vergamini took third place, with eight roundtrippers.

“I like the pitches high and outside,” said Meyers, who played in a basketball game in Pleasant Prairie, Wisconsin, on the morning before the derby and returned to the village north of the border for two more hoops games after receiving his firstplace prizes (framed certificate and a mini bat) in Glencoe.

“My approach,” Meyers added, “was to sit back and drive my hips with each swing. Good time; I had fun.”

Will Narrol, meanwhile, had to deal with bouts of nervousness and a brisk wind—blowing in—while battling in Round 1 of the U12 segment. 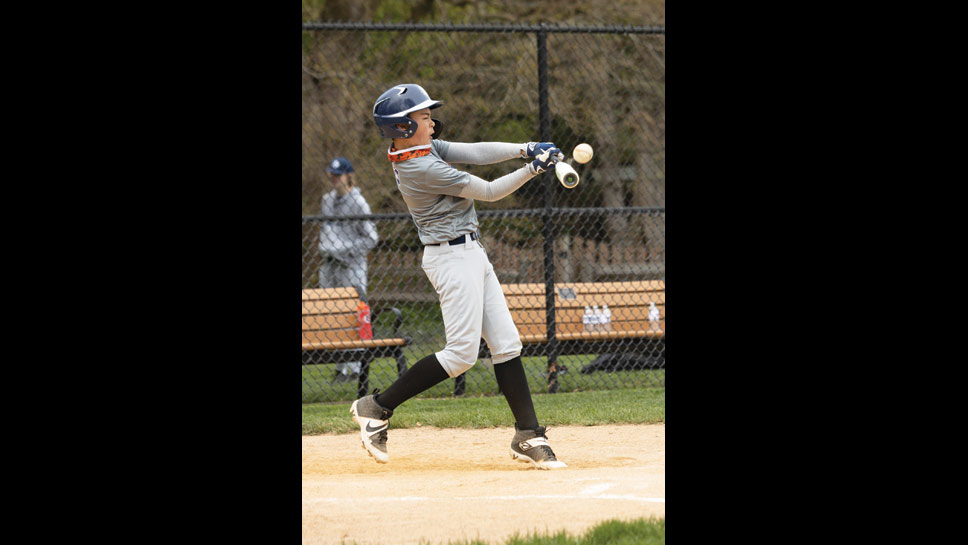 Ethan Killion, a 12U finalist in the Jr. Home Run
Derby staged in Glencoe earlier this month,
shows excellent concentration and form as the
sweet spot of his bat hammers a baseball.
Killion would finish runner-up in his age
group. PHOTOGRAPHY BY JAMES GUSTIN

How tough was the wind in the early portion of the event?

Only one of the 20 U12 entrants managed to hit a homer before the finals. 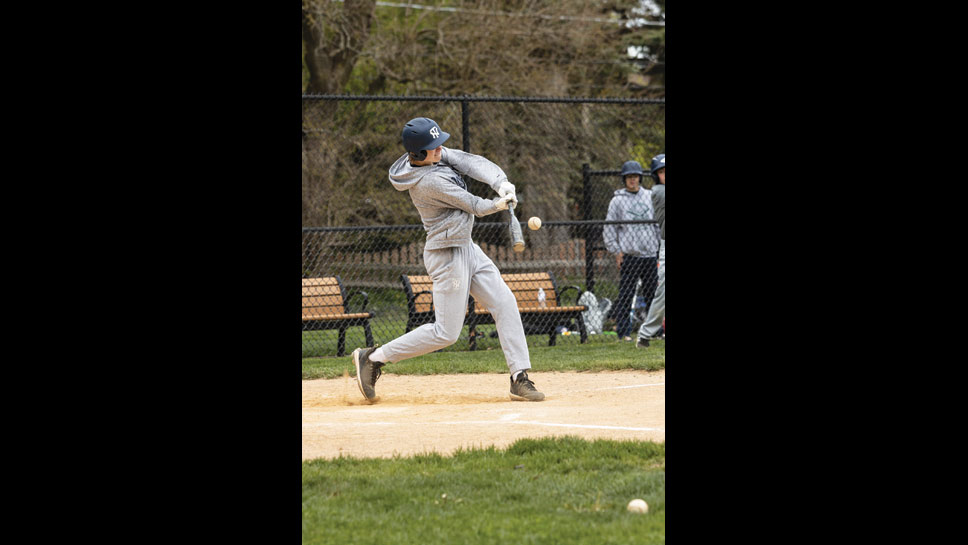 Narrol, a 5-foot-9 sixth-grader at Central School in Glencoe, struck it. He then ripped five homers in the finals, including three that reached the tennis courts beyond Bronco Field, to take top honors in U12 ahead of fellow finalists Ethan Killion and Graham Howard. 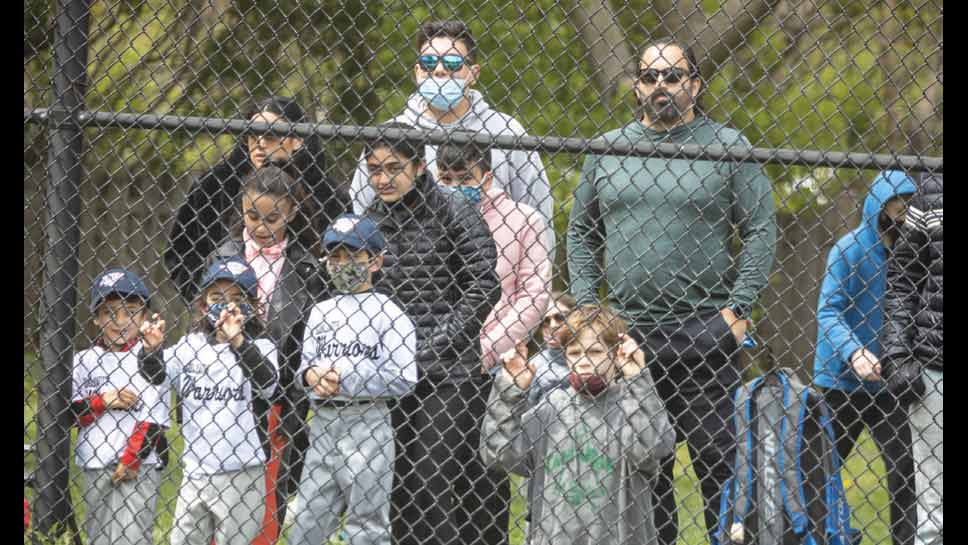 Spectators take in the action at the Jr. Home Run Derby at Watts Park’s Bronco
Field in Glencoe earlier this month. PHOTOGRAPHY BY JAMES GUSTIN

“I was nervous, really nervous,” admitted the humble Narrol, who had tripled for his GBA team, Hometown Hitters, in a 5-3 victory on the morning of Jr. Home Run Derby. “You have to find your groove in a competition like this. I found that, for a little bit, in the final round. But I’m surprised I won. 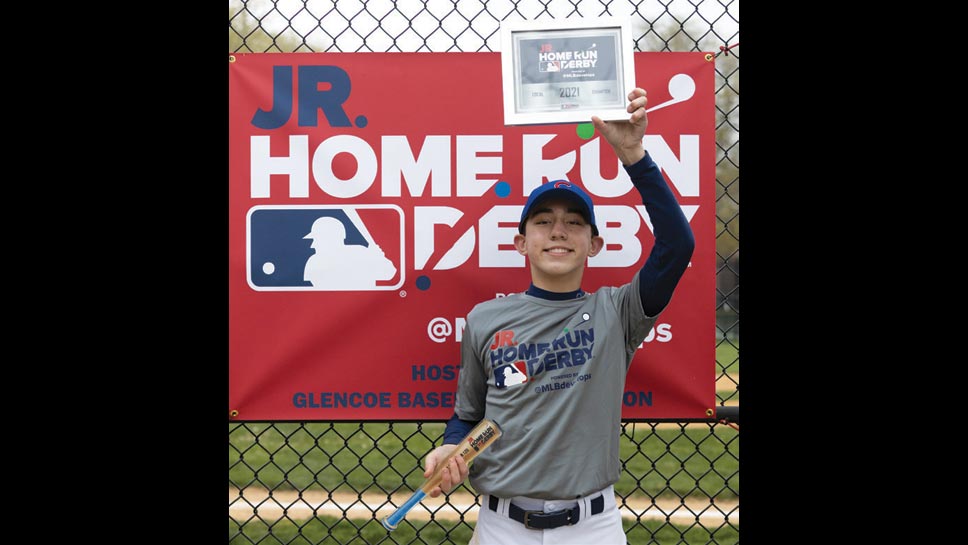 Jr. Home Run Derby 12U champion Will
Narrol, a sixth-grader at Central School in
Glencoe, topped a field of 24 at an event
hosted by the Glencoe Baseball Association
on May 8. PHOTOGRAPHY BY JAMES GUSTIN

“All baseball organizations on the North Shore work together and have great relationships with each other,” said a grateful Renee Narrol, Will’s mother and the GBA board member who served enthusiastically as the chief organizer of the Jr. Home Run Derby from the first pitch until the final swing.

Music blared as each uniformed ballplayer attempted to go yard as often as possible. Fine work from PA announcer and New Trier Township High School senior Chase Avery also added to the festival atmosphere of the derby. Avery, who plans to study broadcast journalism at Syracuse University, announced to the spectators some of the answers to the questionnaire filled out by each hitter.

“(U12 entrant) Grayson Goldberg was born in Hong Kong and his favorite professional player is (former Chicago Cub and current Washington National) Kyle Schwarber,” Avery told the crowd as Goldberg planted his cleats in the batter’s box dirt and prepared to take the first of his warm-up cuts. “Grayson doesn’t like ice cream. His response to, ‘What’s your favorite flavor of ice cream?’ is, ‘Where’s the chocolate cake?’ ”