Imagine studying algebra for most of a semester and then being told you have only a little more than a week to prepare for a final exam in … calculus.

Members of the Lake Forest High School (LFHS) Dance Team don’t have to visualize such a daunting scenario.

They experienced the near equivalent of it as dance performers in the 2020-2021 season and passed with flying colors—LFHS royal blue and gold, to be exact.

“What our girls did, the way they competed after only a short period of time together in person, was incredible,” LFHS varsity dance coach Alexis Linton says. “They geared up to work together initially in November  and then had to accept the quick flip to virtual. The adjustments they made months later, as they added moves and other details to the routine, and the commitment each made each day … amazing. 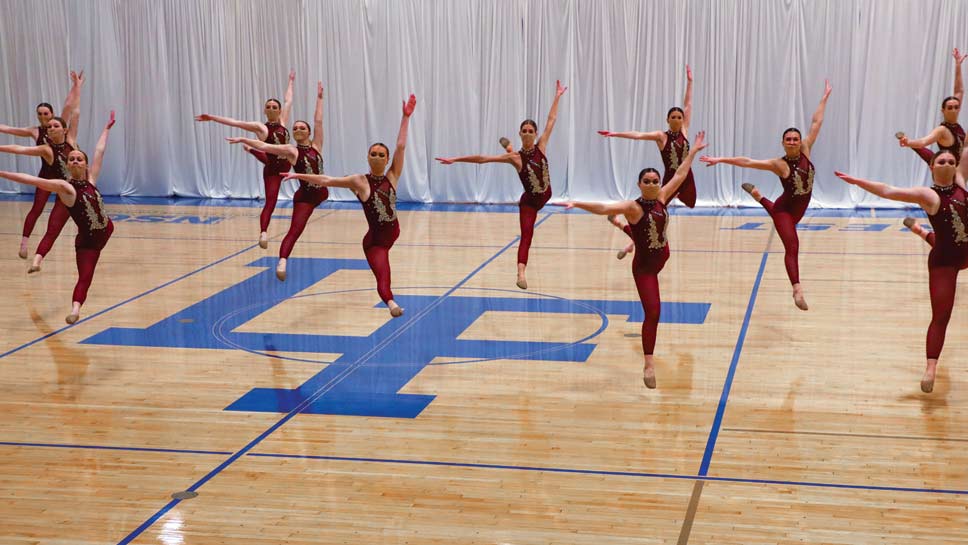 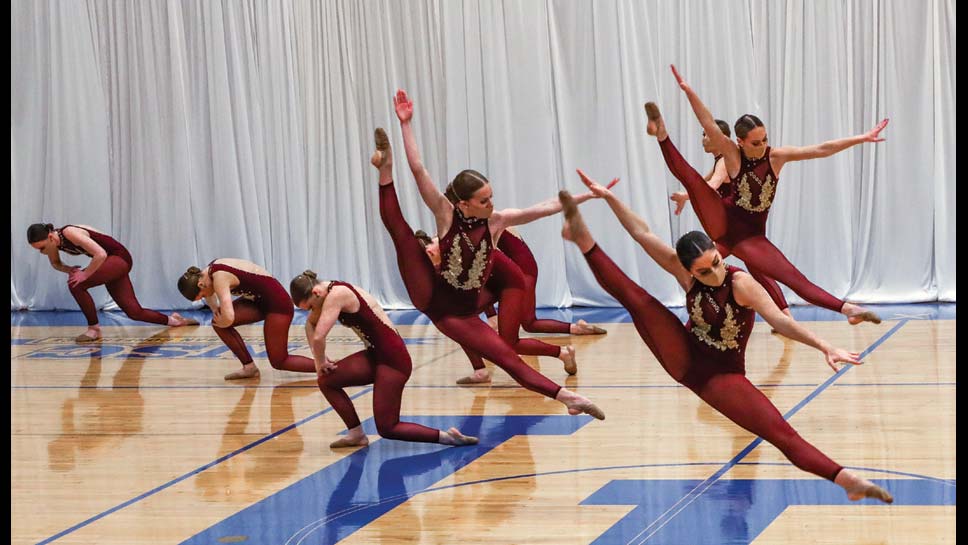 Linton’s Scouts started their cram session in late January, when pandemic-related restrictions were eased, and the squad was allowed to hone its jazz routine in person only eight days before the Class 2A Deerfield Sectional in February.

“We had learned the choreography virtually, but doing it by Zoom was super difficult,” says senior Tess Ivinjack, a tri-captain with classmates Caroline Walsh and Erin Earls. “When we finally got cleared to meet in person, it was go, go, go, go. Then we changed the choreography.

“A lot of stuff was thrown at us.”

But they weathered the figurative projectiles, made every minute count at each practice, and captured the championship at the  15-team sectional with an 88.3-point effort. Vernon Hills High School (86.23) and Deerfield High School (83.83) finished second and third, respectively.

Lake Forest High School’s entrant performed to Lady Gaga’s “Always Remember Us This Way,” a song from the 2018 A Star is Born soundtrack album.

“We all talked about the meaning behind the song and how the lyrics could apply to what we went through for almost all of 2020,” Ivinjack says. “We’re not going to remember the times we weren’t able to compete because of the pandemic; we’ll remember the good times we spent together.”

A sampling of the lyrics:

But all I really know/You’re where I wanna go/The part of me that’s you will never die.

“The girls related to the song and the choreography,” says Linton, the Scouts’ fourth year  coach. “It’s a soulful, emotional song. It fits them. It represents their stories, their challenges—all the things they’ve endured since the start of the pandemic.”

“That song,” adds tri-captain Earls, “was perfect for our routine. It’s about ups and downs. One of our strengths during the season was how well we interacted to get through the tough times. Relying on each other helped us, too.”

The team had gathered in a room at senior Mary Considine’s house when the final results of the virtual Deerfield Sectional were posted. The numbers appeared, without warning, as the dancers viewed videos of performances from other sectional competitors. One LFHS dancer noticed the results and informed her teammates.

The super news spread quickly in the room. Joyful outbursts reportedly unhinged the roof of the Considine abode. Followup shouts from the champions reportedly returned the roof to its stable position.

Then they all hit the beach to celebrate some more on an unusually warm winter day.

“Our focus, for as long (three years) as I was a member of the dance team, was to always project energy to make an audience feel our emotion,” says tri-captain Walsh, who— like Ivinjack, Earls, and Considine—helped LFHS capture runner-up honors (Medium POM division) and take ninth place (Medium JAZZ division) last winter at the Universal Dance Association’s National Dance Team Championships in Orlando, Florida.

“Winning a sectional championship was  huge for us, a turning point,” Ivinjack reflects. “Our collective reaction was, ‘Whoa, to do that, when other teams had been able to prepare longer than we had, meant our team of sisters had found that special connection you need through hard work and the support of our coaches.’

“I’m proud of how we came together after a super-quick turnaround.”

The 2020-2021 crew’s sectional title automatically qualified it to submit a video for the Illinois High School Association (IHSA) state competition on March 6. LFHS finished sixth in a 30-team field, with an 87.92 score; Geneva High School’s dance troupe tallied 94.32 points to win the Class 2A state title.

“The biggest obstacle our team overcame was the unknown,” says Linton, who praised the team’s parents and LFHS Dance Team alumnae for their waves of positivity during a trying season. “We had to wonder, for months, ‘Will we ever get to compete?’ A typical dance season is usually a long one, but that’s necessary because it takes time to fully develop any kind of dance routine. Our girls had little time this year, but they still did what it took to make their routine a special one.

“Their resiliency impressed me. They stayed optimistic, and you could see and feel their energy whenever they practiced or performed.”