Rotary Club of Wilmette member Don Olson’s vivid memories of Prince Philip’s visit to the Chicago area 39 years ago range from the Duke of Edinburgh’s tiny Scotland Yard security detail to the royal’s sterling charm after a banquet to an attendee’s nosedive into a plate of salad at the same banquet.

“Quite an experience,” Olson, a two-time Rotary Club of Wilmette president, says of what he absorbed during “A Program For Peace” event that his North Shore rotary club staged at the Arlington Park Hilton in 1982. “Only one bodyguard accompanied Prince Philip on the trip here, and he wasn’t even armed. You have to remember what was going on at the time—Prince Philip was a target of the IRA (Irish Republic Army). No wonder the State Department felt it necessary to provide a team of 30 to protect him.

“I was asked to manage the dinner for 720 invitees and take care of the event’s logistics,” the longtime State Farm insurance agent adds. “Security wanted to know the names of each attendee and exactly where each would be seated. I had the information, so I shared it.” 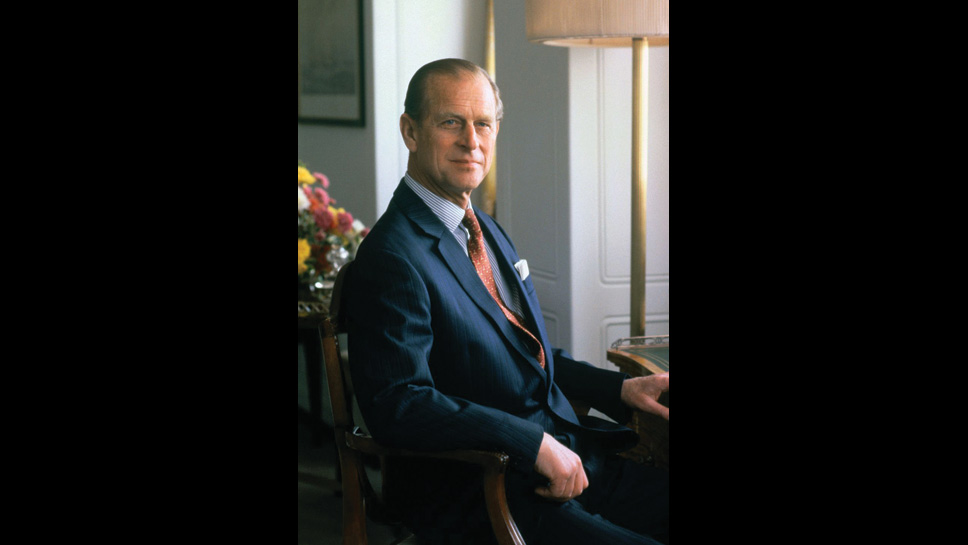 Prince Philip, who died earlier this month at age 99, visited
the North Shore nearly 40 years ago.

Prince Philip, who was born on the Greek island of Corfu and married Britain’s future Queen Elizabeth II in 1947, died at age 99 on April 9. His funeral was held before a gathering of 30 guests at St. George’s Chapel on the grounds of Windsor Castle in the English county of Berkshire on April 17. Philip had been hospitalized several times in recent years, most recently in February for a heart condition at St. Bartholomew’s Hospital in London.

Thirty-nine years ago this November, Prince Philip headlined “A Program For Peace”—a tribute to former Egypt President Anwar Sadat that also announced the location of a Park for Peace in Sadat’s homeland—as the international president of the World Wildlife Fund (WWF). The Queen did not accompany her husband; 23 years after the couple visited Chicago for 14 hours as part of a 45-day tour of North America. Other distinguished guests in attendance included then-Rotary International President Hioji Mukasa, of Japan, and past International Rotary Club of Cairo President Adel Gazarin.

Then-Rotary Club of Wilmette President Roger Drew introduced the VIPs at the banquet meeting. Wilmette’s rotary was a 100-member club in 1982.

“The initiator of the event was (the late William Wallace) “Bud” Robson, my rotary sponsor and a man who worked in the fuel business … fuel used by Evanston and Wilmette,” recalls Rotary Club of Wilmette Co-communications Chair Joe Goldstein, who joined the rotary club the year after the event. “Bud never missed a rotary meeting in more than 40 years. Decades before the peace program, Bud had housed a Rotary International exchange student (Charles De Haes), who would become director general of the World Wildlife Fund.

Bud’s thinking was, ‘Why not also invite the international president of the World Wildlife Fund, who happened to be Prince Philip?’

The World Wildlife Fund is the world’s largest conservation organization, with more than five million supporters worldwide, working in more than 100 countries, and supporting nearly 3,000 conservation and environmental projects. The Park for Peace—Ras Muhammad National Park—was established in 1983 to protect endangered animals and marine life. It’s at the southern tip of the Sinai Peninsula, between the Gulf of Suez and the Gulf of Aqaba.

Olson, who has worked in Wilmette’s State Farm office for 48 years, was also asked to run interference versus media members who wanted an opportunity to conduct a one-on-one interview with Prince Philip.

“Ever heard of a fat chance?” Olson says. “That’s the chance I gave four or five journalists of sitting down with Prince Philip and asking him questions. They were mad at me, so mad, but it was a joy and an honor to serve the role I had. And I also remember a consul from some obscure country had expected to be able to sit at a banquet table near Prince Philip.” 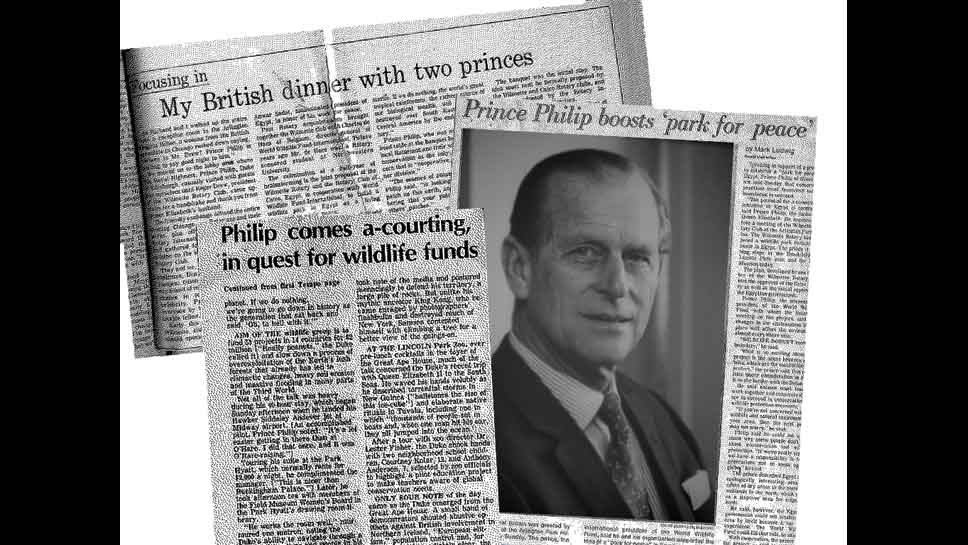 Mementoes from Prince Philip’s famous visit to the Chicago area. 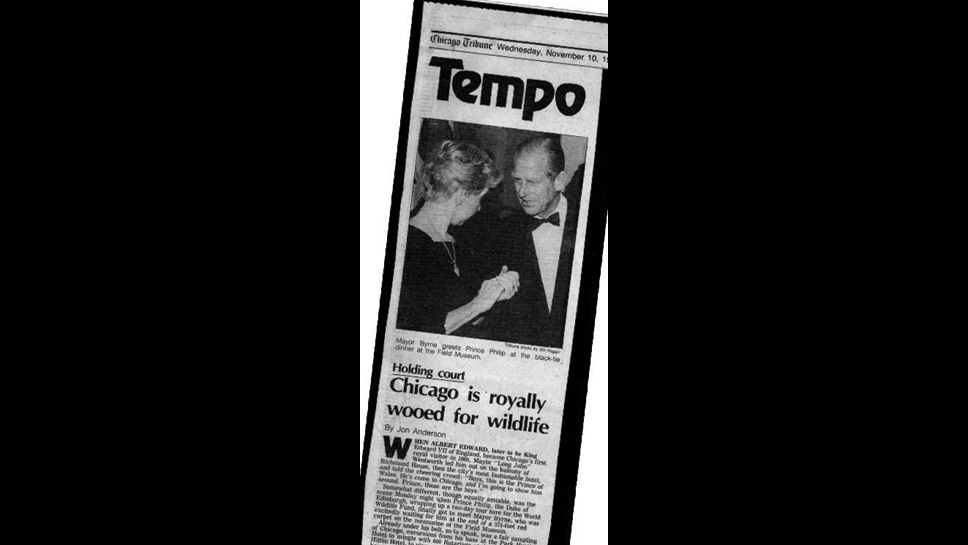 “Good thing I had thick skin,” he says.

Good thing Olson was nearby when an audience member at the banquet face-planted his salad plate.

“I was walking around the banquet hall at the time, in between tables,” Olson says. “I went over to him and pulled him back to an upright position in his chair. I knew him; he was a wonderful man. His wife told me, ‘Don’t worry. He does this all the time.’ He received medical attention and recovered.” 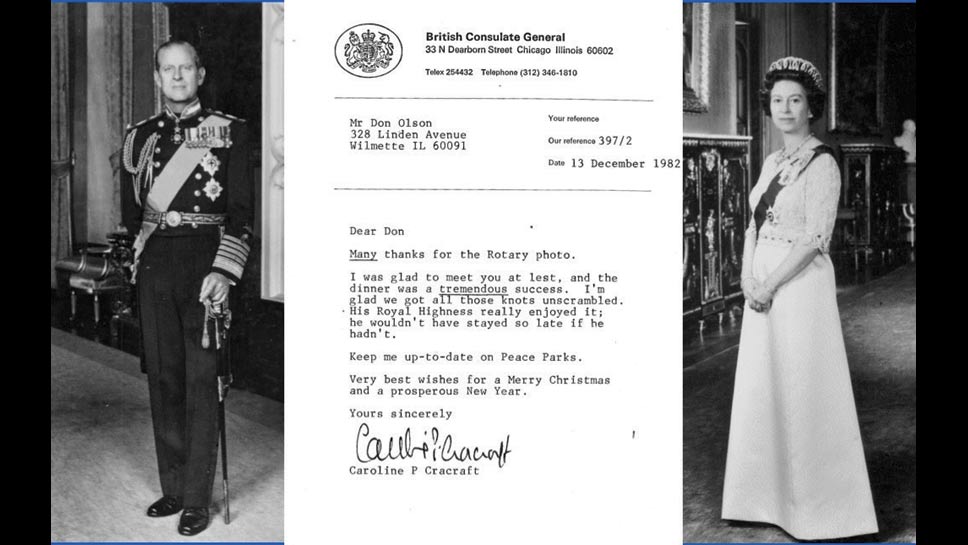 Following the dinner, Prince Philip, Rotary Club of Wilmette members, and others headed to a space downstairs at the Arlington Park Hilton. That’s where an informal meet-and-greet unfolded, with the dashing duke shaking hands with, and patiently fielding questions from, non-media folks. The avid outdoorsman and highly competitive sportsman in polo and carriage driving stuck around longer than he and his contingent had originally planned because he was having such a grand time.

“I asked him, ‘How was dinner?’” Olson says. “I also asked him, ‘Was everything else OK?’ He gave me a strong handshake and looked right at me when he spoke. Prince Philip was quiet, very charming. I was amazed how human he was. He didn’t talk down to me; he talked to me.”

Prince Philip retired from his royal duties in 2017, at age 96. The son of Prince Andrew of Greece and Denmark and Princess Alice of Battenberg, Philip was the longest-serving consort of a reigning British monarch and was a patron, president or member of nearly 800 organizations. Rotary’s “Service Above Self ” motto must have resonated with him.

“We should all hope to live as long as Prince Philip did and do so with as much grace as he had,” Olson says.