Ben Reingold was sitting in his Game Theory Class at Kenyon College in Ohio in 2019 when an idea popped into his head.

“The thing that sparked the idea for Risky Chicken was a class I took my senior year of college called Game Theory. There was a lesson one day and the lightbulb went off,” Reingold says. “We were talking about something called prisoner’s dilemma, which is basically a situation where two entities can either make a decision to cooperate with one another for a mutual benefit or betray the other for their own short-term interest.”

Reingold played plenty of board games while growing up in Highland Park and even created a few simple ones himself, but he wouldn’t call himself a board game addict.

“I played a ton of Monopoly with my dad, and then with my friends and cousins I played a lot of poker,” he says. “Then as I got older, I started playing more complex games, but I was never like a board game fanatic who has 100 games on the shelf. You come to know some of those people and they’re pretty interesting,”

Reingold’s interest in creativity was in part fueled by his experience in Highland Park schools, where he attended Braeside Elementary, Glenwood Middle School, and Highland Park High School.

“I loved growing up in Highland Park. It was it was a great place to be a kid and a teenager, and the schools are really relevant to my story,” says Reingold. “I came across teachers who encouraged and cultivated their students’ creativity, which I think is unique to the North Shore and definitely contributed to me pursuing something creative years later.” 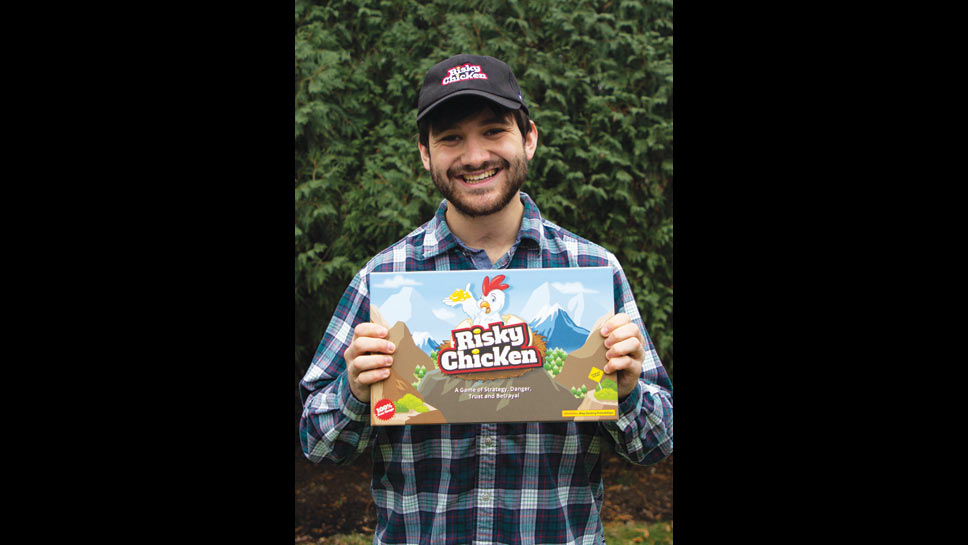 Ben Reingold was inspired by a game theory
class he took at college to create the board
game, Risky Chicken.

After being inspired by his game theory class, Reingold started running to his dorm room between classes and scribbling down ideas for what would eventually become Risky Chicken. 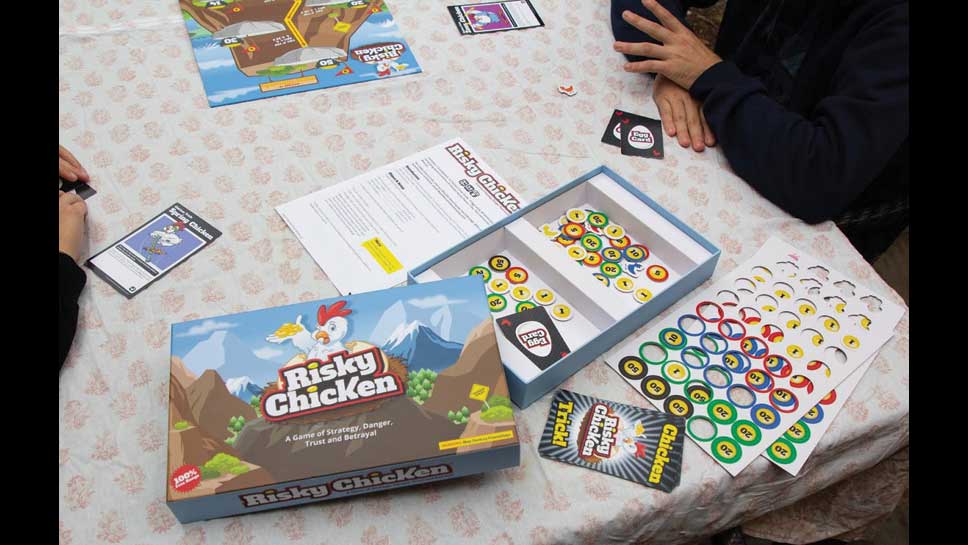 “There was a lot of nuance to the decision being made between loyalty and betrayal in the prisoner’s dilemma, and it interests me because it applies to all sorts of social and economic situations in that moment,” he says. “I thought it would be really cool dynamic for a board game,” he says. “I scribbled all of my thoughts for the basic rules down in my notebook and I sketched out a basic version of the game.”

It was December 2019 when Reingold was home on winter break that he really came up what’s now Risky Chicken. Ironically enough, he got a boost from the COVID-19 pandemic.

Once he felt he had a workable prototype, Reingold invited a few friends over to try the game. Two of his friends, fellow Highland Park residents Meryl and Justine Rudy, told their parents about the game, and they all played the following night.

“A lot of cool things happened. There was a lot of laughing and some angry fun and yelling and we just had a really good time,” says Reingold, “The next day their dad, Kerry Rudy, told me he thought the game was really fun and asked me about starting a business together to publish it.”

While Reingold thought that one day he might publish Risky Chicken, Kerry Rudy brought a business background to the partnership and the idea took off. Reingold started hosting test plays of Risky Chicken at home.

“I did a lot of research to find an illustrator and we ended up finding a really talented one, Lawrence Christmas,” he says. “You can just tell by looking at the front of the box, let alone inside, how talented he is.”

Reingold shifted to playing the game virtually with friends due to the pandemic and he also conducted research on the board game business and marketing,

“It kept my spirits up and my friends’ spirits up throughout the first months of the pandemic and kept up engaged through video,” he says.

In late summer of last year, all of the artwork and graphic design for Risky Chicken was completed as well as the wording of the rules. He ordered 1,500 copies from the manufacturer, which arrived on New Year’s Eve, and everyone who had been involved in developing the game worked together to assemble the game boxes and ship them out.

“I should mention that the same friends who I played with that very first time when I invited them over ended up with official roles in this whole process, whether that be the marketing, photography, or all sorts of roles,” Reingold says.

To date, Risky Chicken has sold copies numbering in the three-hundreds, but Reingold and the team are just getting started. He’s hearing potential buyers of the game are just waiting for friends and family to get vaccinated so they can get together and play.

“We’ve had quite a few people play for the first time and then immediately order one for a friend or family member, which is a really exciting sign,” he says. “It’s starting to pick up some traction with people in the board game universe talking about it on social media.”

Risky Chicken is available for purchase for $19.99 at riskychicken.com. North Shore residents can use the code NORTHSHORE to receive 20 percent off