“Loyola Academy,” Pete Leemputte says, “was an all-boys school then. But we took classes with girls from Regina Dominican every first period. I was into sciences and served as the head of the Chemistry Club. I was a nerd. Ellen was vivacious.”

Initially they sat far apart from each other in the classroom. That changed, gradually, as they got to know each other.

“By the end of the term I was sitting pretty close to her,” Leemputte, now 63, recalls.

Ellen asked Skokie native Pete (Loyola Academy, Class of 1975) to accompany her to a dance held at Regina. The event’s theme was “Stairway To Heaven,” the eight-minute slow song by Led Zeppelin that was always—always—played at the very end of a school dance.

Pete and Ellen are still dancing together, only now they’re Mr. and Mrs. Pete Leemputte of Lake Forest and the parents of four grown children, ages 28 to 35. Beginning in Fall 2022, they’ll gladly sit one out to take in a theater performance at Loyola Academy’s new Leemputte Family Theater. Pete and Ellen gave a multimillion-dollar leadership gift to help fund the theater and the new 29,000-square-foot Center for the Performing Arts, slated to stand at the northeast corner of the academy’s Wilmette campus in about 18 months. The 550-seat proscenium theater will feature a balcony, orchestra pit, and fly tower.

Donors plan to gather on March 28 for a small groundbreaking blessing ahead of the project’s official Valenti Builders groundbreaking ceremony in early April.

“I truly enjoyed being a student at Loyola Academy, and I was grateful for the experiences I had there,” says Leemputte, whose ancestors came from The Netherlands. “It was a different experience on the North Shore. North Shore students and students from the city attended Loyola; I loved that about it, loved and appreciated the diversity of the student body, because it opened my eyes. It was one of many reasons my wife and I sent our kids there.

“Ellen and I focus on giving to enhance education,” he continues, adding discussions he had with Loyola Academy President (the Rev.) Patrick McGrath years ago galvanized his commitment to support the opening of additional doors to creative expression for his alma mater’s students. “There’s a lot to like about what’s available to Loyola Academy students now—the fields for athletics at the Munz campus in Glenview and the new pool, as well as the academics and the important values fostered by the leadership and faculty. But they call the theater that’s there now ‘the little theater.’ It’s too little.” 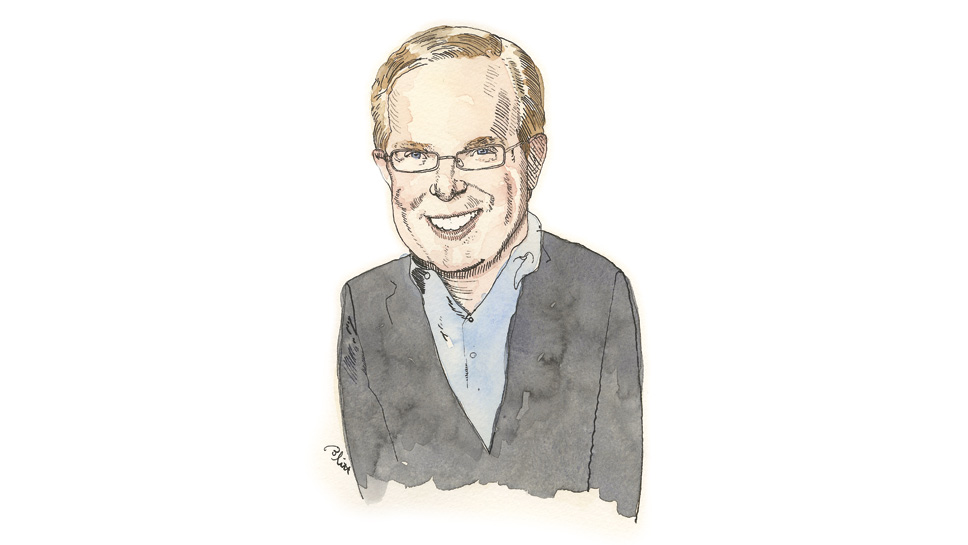 The Center for the Performing Arts will also house a spacious lobby and gallery space; offstage rehearsal and staging areas; a fully equipped scene shop; a green room; m a k e u p and dressing rooms; a director’s office; state-of the- art lighting and production technologies; a 125-linear-foot carved glass wall overlooking an outdoor plaza that will function as an open-air performance stage and gathering space for the Loyola Academy community; a flexible student lounge; and a newly defined campus quad, designed by students in Loyola’s Architecture Club.

A son of the late Peter and the late Mary Leemputte, Pete, who received financial aid to attend the Jesuit school founded in 1909, still cherishes the relationships he developed with Loyola Academy teachers as a teenager. Herr Grove? “A great teacher, a wonderful man,” he says. Philosophy teacher Louis Demos? “Fantastic.” Computer and chemistry teacher Jim Dusablon? “Fun to talk to, always, and a great all-around guy.”

But there’s more to the Loyola Academy education than its academics. Leemputte will tell you that. Any Loyola Academy graduate will tell you that. Jesuit values are instilled there, perhaps none more than “Women and Men for and with Others.” Leemputte earned his B.S. in Chemical Engineering at Washington University in St. Louis. He completed a couple of stints in the product development department at Proctor & Gamble in Cincinnati, before getting his MBA in Finance and Marketing at the University of Chicago.

Ellen attended Oberlin College in Ohio for a couple of years before transferring to complete coursework in pre-occupational therapy at the University of Illinois.

He serves on three boards of directors, including the governing body for MasterCraft Boat Holdings, Inc.

What keeps him happy? Time with family, especially when the setting is the family’s place in Macatawa, Michigan, near Holland.

Working on three boards requires a considerable amount of time, and I’m trying to exercise as much as possible,” Leemputte says. “But if you’re asking me what’s at the center of my free activities, it’s family.”

At the center of his heart? Ellen. Still.

“She’s one of the kindest people I’ve ever met,” Leemputte says. “Everyone who knows her loves her. She’s also funny and beautiful.

Loyola Academy is located at 1100 Laramie Avenue in Wilmette. For more information about the new Leemputte Family Theater and Center for the Performing Arts, call 847-256-1100 or visit goramblers.org