Dr. Husam Balkhy’s fascination with the human heart began with seeing one in person.

“I was always an overachiever in high school and was able to actually observe a cardiac surgery at the latter part of my performative education,” says Balkhy, explaining that this life-changing experience happened toward the end of his high school years in Saudi Arabia. “I felt that the heart was an amazing organ, and for somebody to be able to operate on it, it just blew my mind. At a young age it became my goal.”

It was during his surgical training at Tufts University New England Medical Center in the early ‘90s that he became convinced that non-invasive surgery was the preferred approach—regardless of medical specialty or the organ that needed to be operated on.

“I was lucky enough to do my surgical training in Boston and I trained in general surgery, vascular surgery, and cardiac surgery,” he says. “It was at the time when surgeons started understanding that the trauma that is inflicted on a patient by surgery sometimes overshadows the perceived benefit of the operation that we’re conducting.” 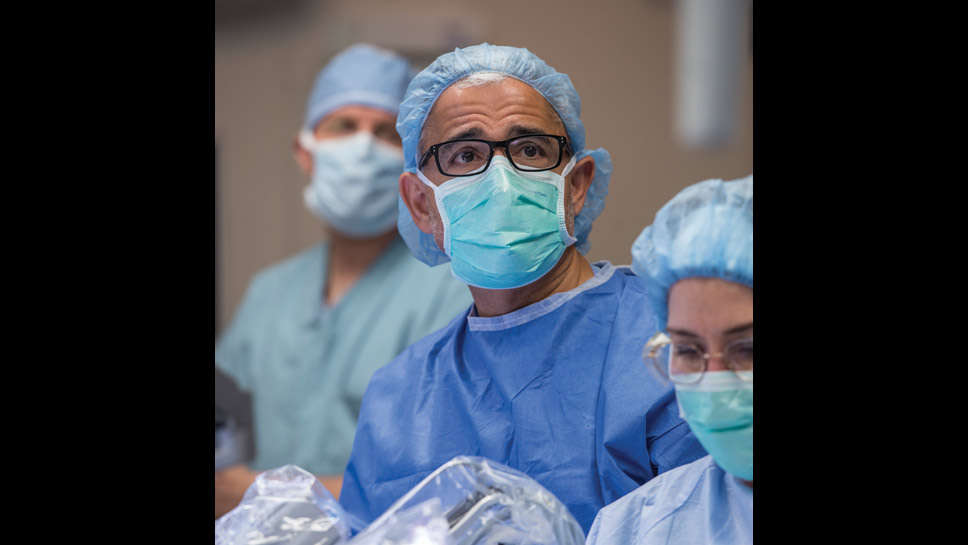 Balkhy says most heart surgeons still conduct surgeries the traditional way, where the sternum is sawed in half, because the heart is a much more complex and difficult organ. Many surgeons feel a big cut is required because that’s just the price of doing business.

“That state of mind didn’t appeal to me because I was seeing long recovery times, and some people getting infections in their sternal incisions,” Balkhy says. “There’s a saying that ‘big surgeons make big incisions,’ and in my mind, the smaller the incision the better the surgeon. It may be a little harder on me and harder on the team, but let’s make it easier on the patients because they’re the ones who need to go through the recovery.”

One of the criticisms of non-invasive surgery is that it takes too long, but what Dr. Balkhy tells junior surgeons and medical students in training is that the patient has come to you that day to give you their heart to fix.

“Why do we need to have a really short interaction? Why is it bad to take as much time as you need to produce the perfect outcome with the least invasion?” he says. “Surgeons are asked to do two and three cases a day where in my mind, if a human being came to me and said, ‘here’s my heart, I want you to fix it,’ if I can do it safely, I’ll spend as much time as necessary to fix it without that big chest cut.”

It was when he went into private practice in Milwaukee in 1997 that his path toward becoming an expert in non-invasive surgery took shape. After a couple of years performing traditional heart surgeries with large cuts. it became clear to him that was not the way he wanted to spend the rest of his career.

By 1999, an operation emerged called a Beating Heart Surgery or Off-Pump, Coronary Bypass, Balkhy quickly embraced the approach because it eliminated the need for a heart-lung machine.

“Even though you were cutting the chest open you were eliminating the heart-lung machine, which was a very laudable thing for recovery,” he says. “About 20 percent of surgeons started doing that, some with good outcomes, some with not the best outcomes. But I quickly embraced it, as did several other surgeons in Milwaukee.”

In 2003, Dr. Balkhy started doing operations for irregular heartbeats using scopes, operations that required just a small incision on the right side of the chest. A year later he was doing valve surgeries, also using small cuts on the side of the chest instead of cutting into the sternum. The natural next step was to start using robotics.

“Another one of the hospitals in Milwaukee got a robot and that’s when it hit my radar in a big way. I said, ‘I’ve got to get this device so I can really go to the next level,’” Balkhy says. “Which is advanced technology and three-dimensional instrumentation that really duplicates the function of the human hand and sometimes actually exceeds it.”

Balkhy started looking around for robots and was able to convince the CEO of the hospital where he was the chairman of surgery to bring in the device. He did some training early 2007, and in the summer conducted his first robotic surgery. Over the next 10 years his practice would become fully robotic where he didn’t open the chest at all.

Around 2013, Balkhy was recruited by the University of Chicago Hospital, and soon he and his team relocated from Milwaukee.

The rest is history. “UChicago Hospital was a good option. I was very impressed with the executive team and the dean of the medical school. They had a vision,” says Balkhy. “I felt that I would be able to advance my vision from a little bit more of an academic platform. So, I’ve been here now eight years this summer.”

Balkhy says the commitment that UChicago Hospital made was to make robotic technology a priority. The expense of the instruments was never a question, and he had the freedom to organize the program from the beginning.

Balkhy’s team at UChicago now does about 200 robotic surgeries a year. His team includes six members, as well as anesthesiologists who are facile with the robotic approach, and experienced operating-room personnel.

While robotic heart surgery cannot treat every heart condition—heart transplants, for example—the technology continues to evolve in a way that allows surgeons to handle more complex problems including coronary artery, valve, and heart rhythm disorder among many others. 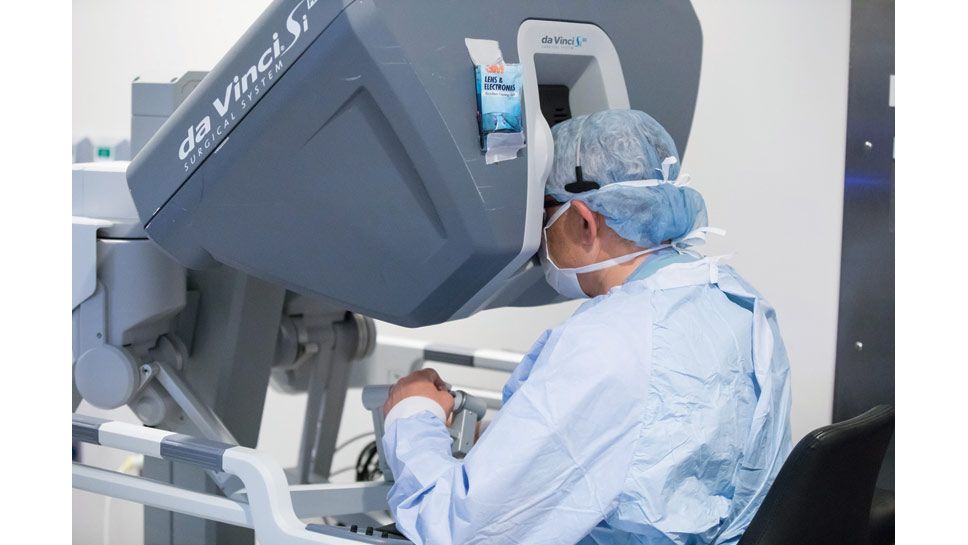 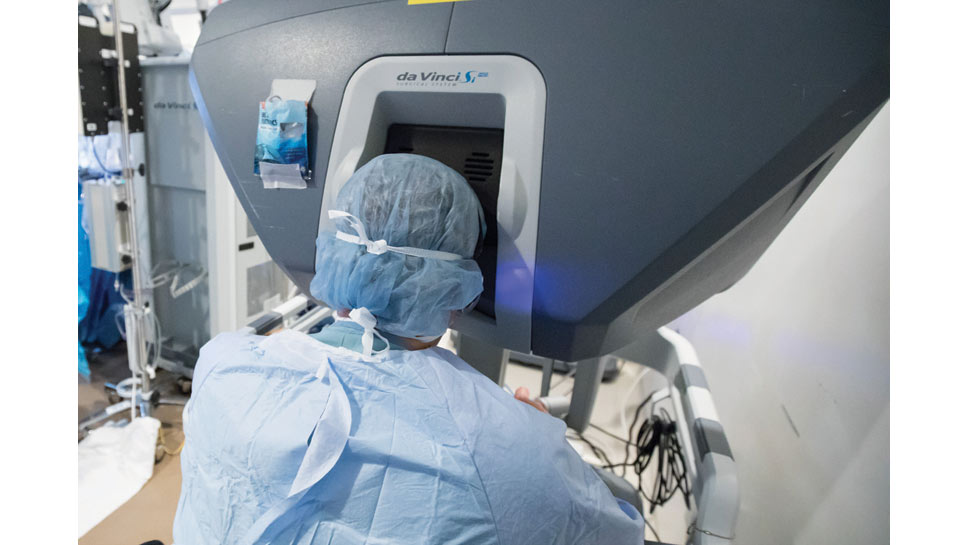 “Basically, the more technology and the more options we have, the more thought process goes into customizing the therapy that we deliver for each and every patient specifically,” Balkhy says. “So, the inclusion criteria for robotic surgery have grown since we started, and the exclusion criteria have receded.”

“Those are the four big advantages, and what I would recommend to patients if their doctor doesn’t know this approach or they’re not being referred is to get a second opinion.

Be your own advocate.”

One other advantage of non-invasive, robotic surgery is that it avoids the potential effects traditional heart surgery can have on mental health. Scars left on the chest, some that can run from the neck to the belly button, can sometimes have a negative impact on self-esteem and quality of life.

“If you think about it, biologically, it is a big deal sawing someone’s sternum. You really have to be very motivated to have somebody go through that,” Balkhy says. “I used to tell my team, ‘we’re about to take this saw and cut into their sternum and separate,’ and it became a mantra for us to just acknowledge that, because when you do that two or three times a day every day as a cardiac surgery team, you become immune and numb to what it really does to people.”

Which is why, Balkhy says, patients who are able to have their heart problems addressed through robotic surgery are grateful for the technology.

“We get patients that go online, and they send us their films. Then they ask, ‘am I candidate for this?’” he says. “Usually, they are because everybody’s a candidate until proven otherwise. They fly in and they have their surgery, and they fly back home a week later and they’re extremely grateful for not having had that big chest cut.”

Anthony Andaleon, an electrical engineer from Winthrop Harbor, underwent robotic surgery performed by Dr. Balkhy for a blockage on March 4. More than a decade ago, his mother had traditional heart surgery and he watched as she struggled to fully recover. He wishes the technology was available back then.

“I saw my mom undergo heart bypass surgery and I didn’t want to go through the same thing,” Andaleon says. “I did my intake at 6 a.m. and by 2 p.m. I was already walking around. The next day, I was back to normal, and the following week I was back at my gym.”