In 2015, while on summer vacation in Neenah, Wisconsin, Steve Worth awoke on a postcard day and decided to run three miles. The Lake Forest resident and tech company executive completed the jog. 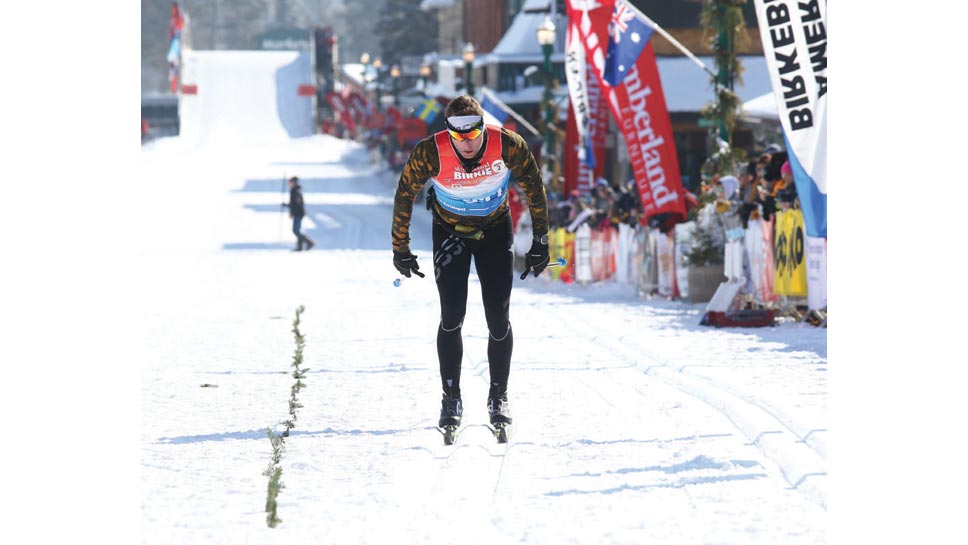 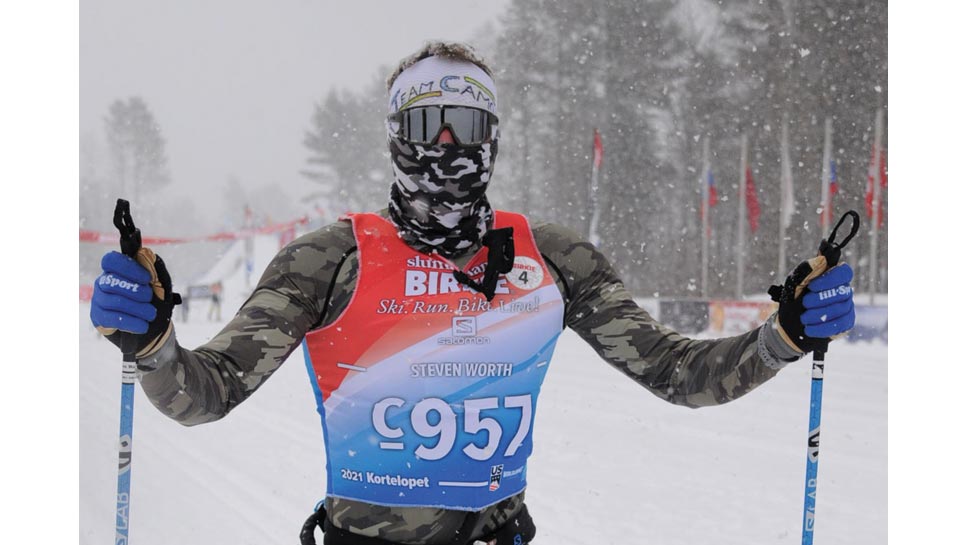 Steve Worth competes in the American Birkebeiner ski race in Wisconsin. PHOTOGRAPHY BY MARATHONFOTO

“That was the year of my half hearted attempts to get healthier and in better shape. That was an eye-opener, struggling to make it to three miles. It was a real catalyst for me. I knew, from that day forward, I had to get serious about training on a regular basis.”

Worth got spooked around that time too when friends of his began to develop serious health issues in their mid40s. Too young, he thought. Friends suffered heart attacks. Scary, he thought.

Reality opened his eyes even wider. He conjured up the faint memories of what it felt like to run quickly with ease 25 years earlier.

Fast forward to 2021. In the last couple of years, Worth has competed in sprint duathlons (2.5-kilometer run, 20k cycling leg, 5k run) and finished first overall in three of them. This led to a #1 national ranking from USA Triathlon for the 50-54 age group. Mixed in with duathlon were a variety of other events such as 5ks, 10ks, half marathon, and more. 2020 was the year of “Breaking 5 at 50.” In August, in a timed mile held at his nephew’s high school in Wisconsin, Worth zipped to a time of 4 minutes, 53 seconds—an elite clocking for a man his age.

“I spent the first half of the last five years working on strength, general fitness, and rebuilding my endurance base, then I was able to introduce racing and ambitious goals. I then took the weekend warrior sports approach to the next level, adopting a ‘light’ version of a professional plan and learning along the way,” Worth, also a competitive cross-country skier, says of his regimen since that choppy, highly demanding run in Neenah. “I started gradually, training about 300 hours in that first year and increasing that time by about 15 percent each year since. Certain levels of physical ability and training are commonly known prerequisites in endurance sports, but what people don’t see or may not realize is that there are large doses of planning, strategy, focused execution, attention to detail, and consistency.”

Worth’s main competitors in duathlon races, remarkably, are men between the ages of 20 and 34. He’s not “gramps” to them yet; he is their swift and age-defying “uncle.” Worth—known as “Camo Man” in some circles because his bicycle frame sports a camouflage motif, as his clothes often do—shows up at starting lines and now induces more than a few “uh-ohs” from his daunted foes.

“If I’m going up against, say, a 28-year-old in a duathlon, and I know he’s potentially a faster runner than I am, I’m calculating while riding my bike in the race, how much faster I have to ride to create a lead and put myself in a favorable position for the second running leg. As much as I love the outdoors, I’m not just looking at the scenery while riding along! You can do that another day.”

Worth, a Wisconsin native, had to look for a replacement sport for basketball in high school after realizing his career in hoops was “slowly and steadily declining.” He found cross country skiing, thrived atop snow, and continued his ascent in the grueling sport while at Cornell University. Worth admits he was a very mediocre skier by NCAA standards but was enamored with the sport and the outdoor time it required. 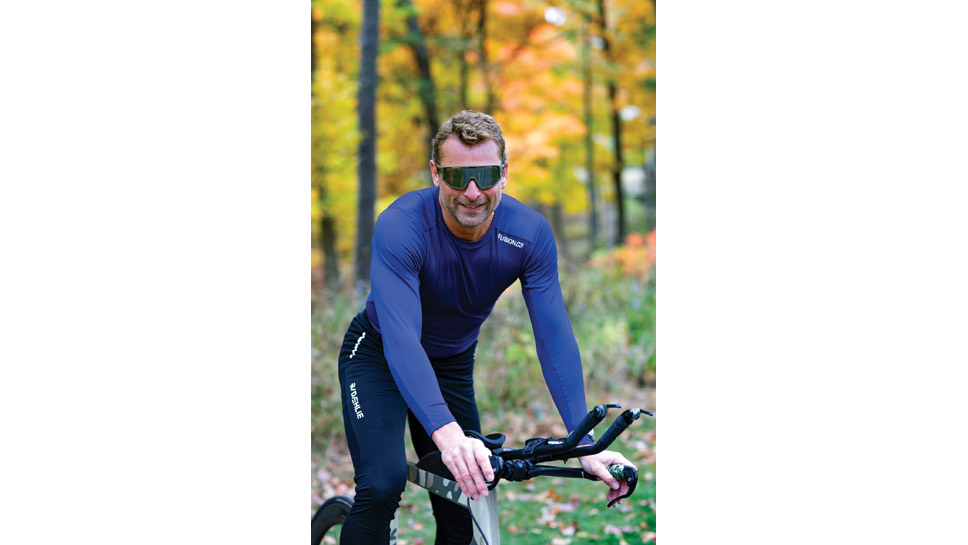 Steve Worth of Lake Forest.
PHOTOGRAPHY BY MONICA KASS ROGERS

The chance to ski race again, not the other sports, was actually the initial race motivation. He has made a tradition of the American Birkebeiner ski race in the north woods of Wisconsin each February. He recently completed his fourth year of the largest nordic ski race in North America. The “Birkie” draws thousands of skiers and Worth has been concentrating on the 18-mile classic technique event where he has worked his way up from top 35 overall to top 5 this year.

Following his years at Cornell, Worth earned his law degree and MBA at the University of Wisconsin-Madison. He met his future wife, Sheridan Road Editor-in-Chief Dustin O’Regan, in law school, and they have lived in Lake Forest since 1998. They have a daughter, Redding, who attends The Lawrenceville School in New Jersey.

“Redding is the star of the family,” insists Worth, who, along with his wife, have been heavily involved in charitable organizations over the years. Worth focuses on outdoor conservation groups and efforts supporting Veterans’ causes. The latter is something he shares with Redding who has had a passion for thanking Veterans from an early age. She has been a driver of their involvement with the Lake County Honor Flight where she has taken multiple flights as a Guardian.

Last Fall, Worth helped raise money for the organization with a Half Million Steps Challenge in the month leading up to Veterans Day. On the holiday itself, he decided to top off the campaign with 50,000 steps. He chose to run on the Des Plaines River Trail for the entire length of Lake County from the Wisconsin border down to Lake Cook Road, about 33 miles. “It was a bit of a last-minute plan,” Worth notes “but I enlisted a friend to ride his bike alongside to keep me company and carry some water as all water sources were shut down during the pandemic.” Motivated by thoughts of Lake County Honor Flight veterans, Worth covered the county in about 4 hours and he later learned that this was the fastest known time recorded for that route.

So does Worth have the endurance to keep racking up impressive results in his 50s and beyond? Look for those to continue for years.

“I hope to inspire people to become more active, to keep moving,” says Worth, who sets yearly athletic goals and wants to melt time off that 4:53 mile. “Get outside; we have wonderful forest preserves around here. Committing to getting in shape and racing at a high level has changed my life for the better. This winter I met a lot of new and returning skiers at the Lake Bluff golf course—a big shout out to the Lake Bluff Nordic Ski Club. So whether you have your sights set on a daily walk or the Chicago marathon, set some small goals, achieve them, and see where it takes you.”

“Training is a process and a long journey. But people are interested in the latest race results and often look puzzled at the concept of driving six hours (or across the country) to subject yourself to a tough event. However, the allure of racing for me is much deeper.” He concludes, “Racing is a great test of strategy, execution, and grit; but more importantly it is a celebration of all your training!”