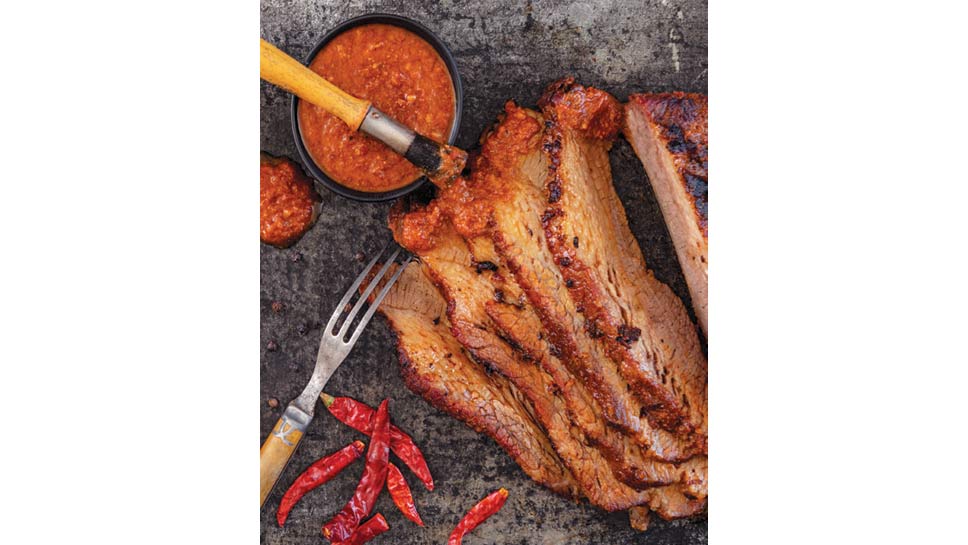 Yes, you can use the oven to make a good Texas Slow-Roast BBQ brisket! It’s not quite the same as the melt-inyour mouth meats that came out of my Aunt Barbara’s backyard smoker in Jacinto City, Texas. But slow roast anything for a good long while and add a sauce with soaked and pureed ancho and chipotle peppers and you get delicious eats. To make this brisket, you’ll wrap the meat in bacon, which then becomes part of the thick and zesty sauce. If you have brisket left over, it makes great BBQ sandwiches when chopped fine and served with the extra sauce.

FOR THE BBQ DRY RUB

(Store extra in jar for future use)

FOR THE BBQ BRISKET

FOR THE BBQ SAUCE

METHOD ROAST THE BRISKET: Place oven rack in middle position. Preheat oven to 275 degrees. Rub the brisket with ½ cup of the dry-rub spice blend. In a large Dutch oven, lay out half of the bacon strips, side by side. Place brisket fat side down on bacon, fold the bacon ends over to wrap the brisket. Place the remaining strips of bacon over the top of the brisket, tucking ends under so that you have a brisket completely wrapped in bacon. Cover the Dutch oven with the lid. Place in preheated oven and roast for 4 hours. Turn oven heat off, leaving brisket in oven to rest while you make the sauce.

MAKE THE SAUCE: Remove and discard seeds from the dried ancho and chipotle chilies. Break the dried chilies up and place in medium bowl. Pour ½ cup boiling water over all and set aside for 15 minutes until very soft. While chilies soften, scoop 2 Tbsp of bacon fat from the Dutch oven into saute pan. Saute onion in fat over medium heat until soft. Mix vinegar and brown sugar and add to the onion in the pan, stirring for three minutes until syrupy. Remove brisket from oven. Pour accumulated juices into a bowl; skim off and discard fat. Unwrap bacon from brisket; chop bacon and add to the onion and syrup in the saute pan. Drain the ancho and chipotle chili pulp; blend until smooth. Add with the tomato paste to saute pan, over medium heat, stirring to incorporate. Add beef juices and chicken broth to the pan and cook for 10 minutes, stirring occasionally. Place all in a blender, or, use an immersion blender to blend until smooth.