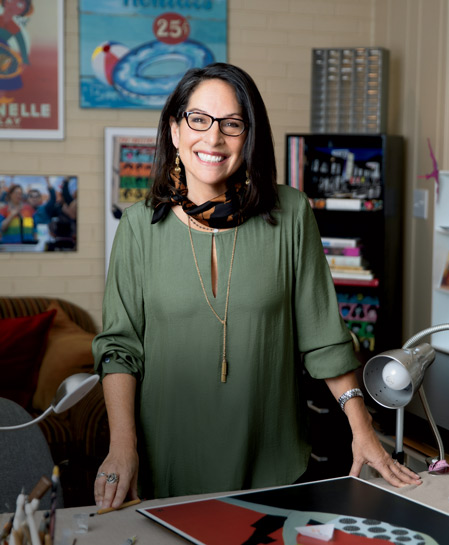 Think of a vintage Chicago travel poster that features 4,500 crystals in just the red beach umbrella alone and a personal wedding photograph in which the bride’s gown is enhanced with 2,000 crystals, some of them no larger than a poppy seed.

“Each crystal is like a precious little jewel and the effect of thousands together is quite captivating,” says Kuppersmith. “The radiance and brilliance of the Swarovski crystals help to bring the art to life, shimmering as they capture and reflect light. As viewing angles and lighting conditions change, so too does the piece of art.”

But while Kuppersmith grew up in an artistic household—her mother, she says, was always painting, sewing, and visiting the Art Institute of Chicago—it was a foregone conclusion that she would eventually attend law school.

“I never really considered other possibilities,” says Kuppersmith. “It seemed logical and reasonable. I wanted a career and wanted to help people.”

After graduating with a degree in political science from Tulane University in New Orleans, Kuppersmith headed West to study law. It was in the Bay Area that she first met her now husband of more than 30 years, Mike. He, too, practiced law and was happy doing so. Kuppersmith, however, was not.

Once the couple had kids and moved to Glencoe, Kuppersmith left law and shifted her attention to raising a family, becoming involved in many of the kid’s activities. However, it was what happened while the kids were at school that really recharged Kuppersmith’s batteries, so to speak. 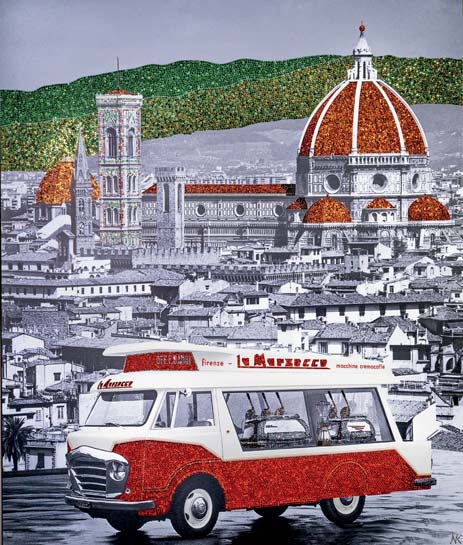 This custom piece was a gift to La Marzocco, an Italian espresso machine manufacturer and is installed at Accademia del Caffè Espresso, an Education and Innovation Coffee Museum located outside of Florence, Italy. Approximately 24,000 Swarovski crystals in 35 different colors and 8 different sizes were individually hand applied to this 1960’s black and white photograph. The radiance and brilliance of the crystals help bring the image to life, twinkling as it captures and reflects light. Photography by Brendan Walsh

“I could often be found in our home’s very well-stocked craft room,” she says. “I made jewelry, designed invitations, crafted mosaic trays—a litany of things. I would become completely consumed and lose track of time. Creating things nourished my soul. It still does.”

Upon becoming an empty nester years later—a defining period in her life—Kuppersmith looked inward and decided to return to her artistic roots. Thanks to her antique collecting parents, she had always loved colorful vintage posters and fruits and vegetable labels, so she tested a theory by mounting the pieces on a board and adding crystals.

The results were “dazzling,” and Kuppersmith knew almost immediately that she was on to something unique. It was her mother who then encouraged her to continue creating, take more risks, and develop new techniques.

“My mom then passed away. The adjustment to becoming an empty nester was, no doubt, compounded by the loss of my mother. It was a seismic shift in my world and a period of introspection,” recalls Kuppersmith.

She sought refuge in her studio, spending hours quietly honing her craft and committing to art in a way she had not done before. It was there that she felt closest to her mom, and Kuppersmith calls the period “therapeutic.” 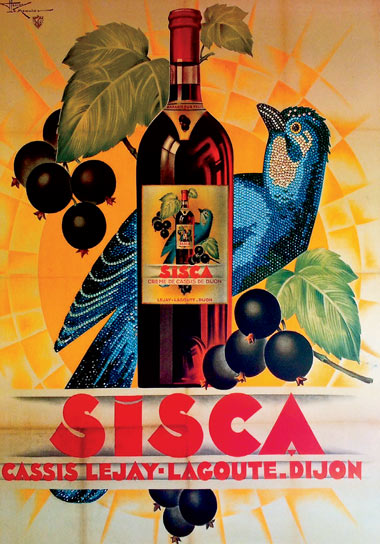 An early piece, this brightly colored reproduction of Henry Le Monnier’s vintage French wine poster Sisca features 4,000 larger sized Swarovski crystals. Because the crystals catch and refract whatever ambient light is present in the room, as lighting conditions and viewing angles change, so too will the piece of art.

Kuppersmith came away from that time with a greater sense of self and a renewed desire to create, formally launching NIK Crystal Art Studios and expanding her process to geometrics and photographs.

Despite having no formal art education, the studio took off and commissions started rolling in. Her most ambitious? A private individual called upon Kuppersmith to recreate a 1960s photograph of a luxe coffee van in Florence as a gift to espresso machine manufacturer La Marzocco. The work was later installed at the Accademia del Caffé Espresso, a coffee museum located outside of Florence.

“An Alfa Romeo van sits in the foreground with the Duomo and rolling hills of Italy in the background,” explains Kuppersmith. “After increasing the contrast and making some additional edits to the original high-quality image, I added 24,000 crystals in 35 different colors and nine different sizes. I want the crystals to enhance a piece, not take it over.”

Using Swarovski crystals in a variety of sizes and colors allows Kuppersmith latitude to create depth, shading, detail, and nuance. She likens the process to that of a portrait artist mixing paint colors. Once she applied the process to larger, more intricate pieces, the possibilities became endless. 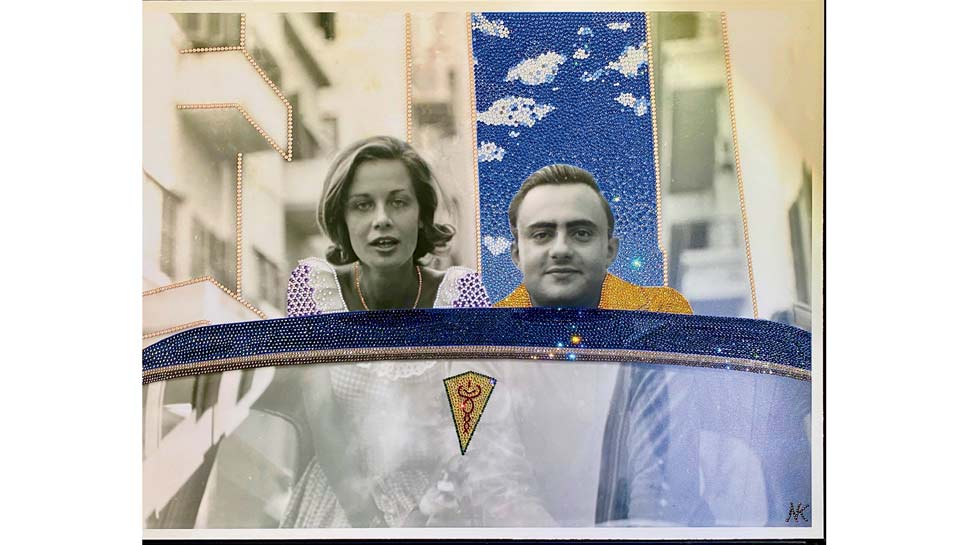 A custom piece created using a treasured photograph taken almost 60 years ago in Beirut, Lebanon. After gently restoring the black and white photograph, color was added with approximately 8,500 Swarovski crystals in 25 different colors and eight different sizes, creating an elegant and meaningful gift for the featured couple.

“My newest technique allows me to elevate a client’s personal photographs into unique, meaningful pieces of art,” says Kuppersmith. “After converting color photos to black and white, I recreate spotlights of color in a photo editing program. Then, the crystal application process begins with my palette of more than 120 colors, many with differing effects.”

Take, for example, the photo of a young couple in Beirut. Their daughter brought the image to Kuppersmith, telling the story of her parents who fell in love, emigrated to America, and have now been married for 58 years.

“It had become a treasured family photo of when the parents first met,” notes Kuppersmith, who individually applied 9,000 crystals in 25 various colors and eight sizes to the image. “The daughter gifted it to her parents and now it will stay in their family forever. It was such an honor to create this piece, and I felt so connected to this family and the couple’s beautiful love story.” 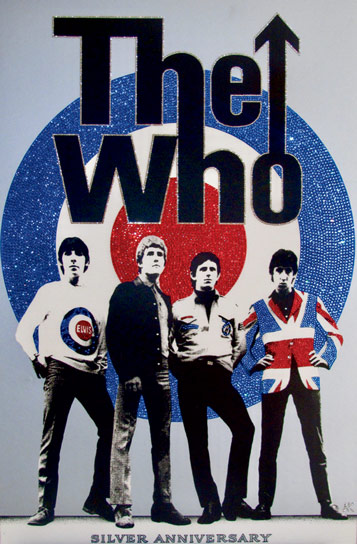 A custom piece using the promotional poster for The Who’s Silver Anniversary U.S. tour created for a devoted fan. It features The Who’s iconic bullseye set behind a famous image of the group surrounded by a silver background. Over 6,000 brilliantly colored Swarovski crystals help create the striking illusion of the image jumping off the page.

Kuppersmith has since memorialized album covers, reproductions of vintage posters, travel landscapes, cartoon characters, and more. What she would like to do next is continue working with photographs to further refine her technique, explore new contemporary and classic applications for her work, and create original artwork with her own photography.

“Each piece is so special and brings me so much joy to create,” says Kuppersmith. “I think that the most meaningful way to honor my mom is by taking my work to the next level.”