Neal lives in Winnetka with her husband, Matt, and their sons, 11-year-old Ryan and 7-year-old Luke.

“I’d wanted to do a full Ironman for a while,” says Neal, who, over a 15-year span, had raced in four half Ironman races and several triathlons before heading to Kentucky to line up for Ironman Louisville in late 2019. “Mom’s cancer diagnosis was the tipping point for me. I’d always been a disciplined person, but I knew training for and competing in a full Ironman would take me to a different level.”

“You grow the most when you’re challenged,” she adds. 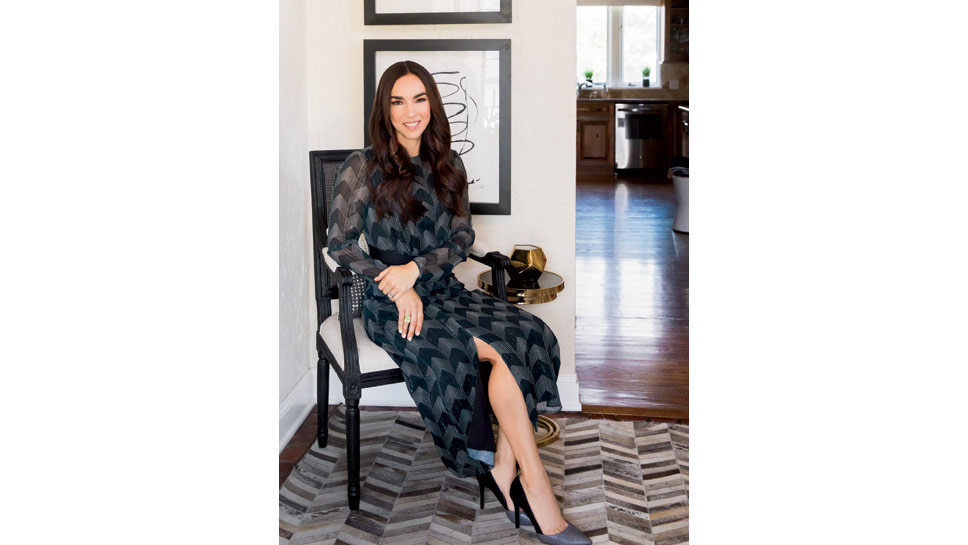 “Long journey and long days, filled with challenges and ups and downs,” recalls Neal, who is in her early 40s. “My mother has always been strong and resilient. I had to be the same, as I prepared for the Ironman, worked fulltime, continued my role as wife and mother, and took care of my mom.”

When asked about her training regimen, Neal shares that she typically practiced each discipline two to three times per week, doubling up some days.

“There were days when I was on the bike for six hours straight and capped it off with a one hour run. It was like a full-time workday. But I loved it.” Often workouts were tackled in the evening, after a long day of work. “I just made it happen because that’s what you do when you want something so much. It was good to throw myself into such a positive project.” She continues, “There were certainly challenges—like swimming in frigid 55 degree Lake Michigan, clad in a neoprene cap and booties to tolerate the extreme temps. You push your body to the limits.”

And it’s not only about getting your body ready to perform for 12 hours straight—you need rest and recovery to prevent injury, and you need to master nutrition, which some triathletes consider the fourth discipline. You can come to race day ready to swim, bike, run, but if you don’t fuel properly throughout the day, it’s game over. 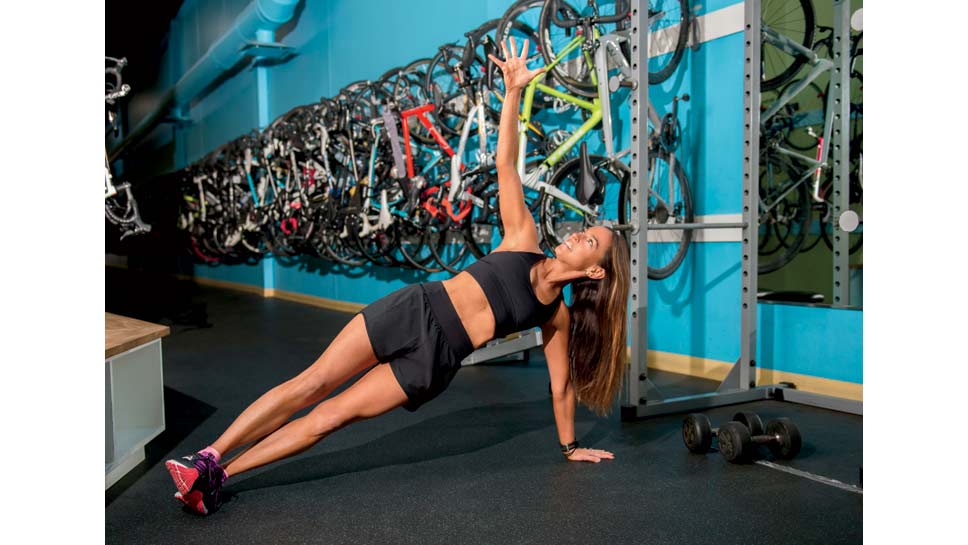 And it’s not only about getting your body ready to perform for 12 hours straight—you need rest and recovery to prevent injury, and you need to master nutrition, which some triathletes consider the fourth discipline. You can come to race day ready to swim, bike, run, but if you don’t fuel properly throughout the day, it’s game over.

Never underestimate the importance of having a coach. 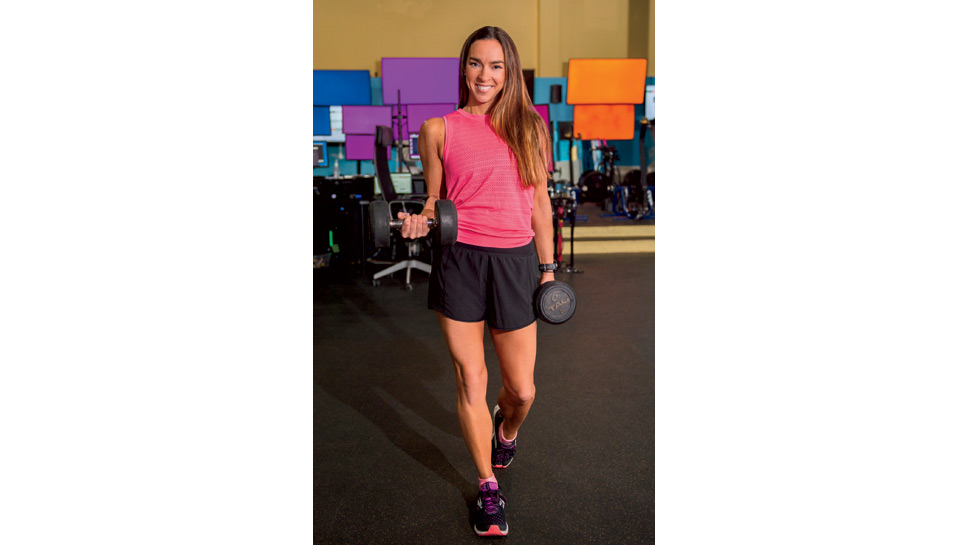 Neal’s husband and children were just as indispensable from start to finish, serving as in-house, rah-rah machines for the former high school cheerleader and dancer from Buffalo, New York. Red Team Kate Tshirts were distributed, and worn often and proudly, thanks to Matt.

“Ironman is an individual race, but having a support network like mine was absolutely critical through my journey,” says Neal, who, in May 2020, was named executive director of the nonprofit Driving Forward, which helps recent college graduates transition to careers by providing professional development training, experience, and networking opportunities. 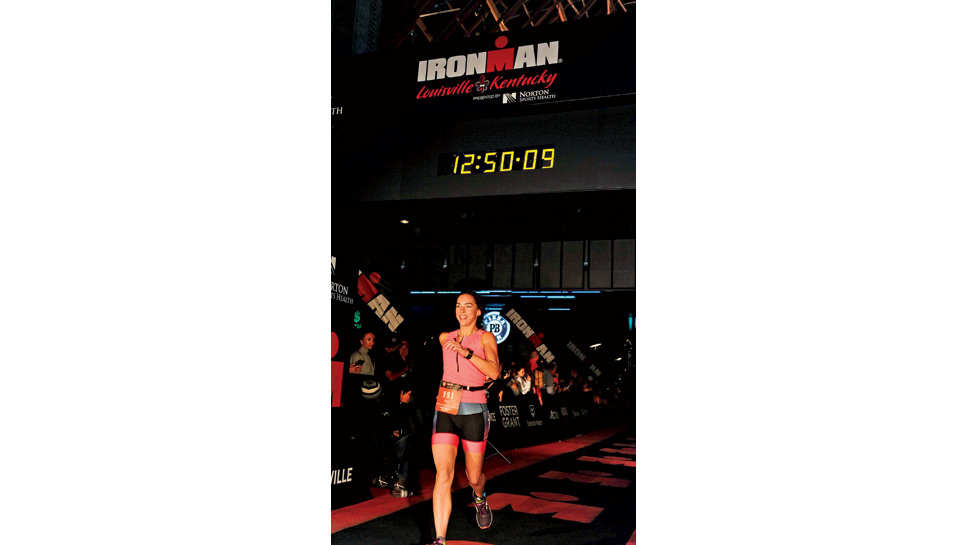 Kate Neal finishing the Ironman
Louisville with a race time of 12:12.
The clock reflects a time of 12:50
due to the staggered start.

“Having my husband’s support and understanding was huge,” adds the Northwestern University graduate. “My kids? They motivated me, too. They propelled me, encouraged me.”

Ironman Louisville took place in October 2019. Neal, while running in the final leg of the competition, thought about an important person in her life each mile and dedicated all 1,760 yards to that person. As she neared the finish line and eyed her thrilled husband and coach, she felt the collective energy of the spectators. Her thoughts and emotions swirled at breakneck speeds.

“It is an indescribable feeling. Months of hard work built up to that moment. I was filled with gratitude for the people I have in my life,” notes Neal. In an event that traditionally includes 20 to 30 percent females, Neal finished in the top 60 percent of her division of 119 participants in Kentucky’s “Derby City,” and 42nd among that same throng in the running segment. “You sense the power of community everywhere you look on race day. You’re also surrounded by a sea of people, all striving for the same goal—to finish strong. I felt elation afterward.”

Upon her return to Winnetka, Neal was greeted at home by beaming friends, Team Kate, rounds of applause, and a village of balloons. Champagne corks popped. At some point on that day, Ryan and Luke must have realized that their mother, without ever sacrificing a good night’s sleep, could be a loving parent, a career woman, and an athlete.

But the celebratory day was about a pair of significant feats, not just Neal’s. Gibbons, remember, had conquered cancer.

“I was proud of my mother for her unwavering fortitude; just as she was proud of me,” explains Neal, who recently started training for her next Ironman—scheduled for this November in Arizona—after her winter of yoga and low-impact weightlifting.

Almost one year after the COVID-19 pandemic began, Neal reflects on her life, as well as her healthy, sunny-forever outlook. “There’s a silver lining in all of this; there has to be,” Neal insists. “The pandemic has made all of us look internally and focus on our passions. More than a year ago, I chose to train for an Ironman. I discovered that it was more about the journey than it was about finishing the race. We all have an ‘Ironman’ in us, a challenge to overcome, right? What’s yours?”