Mila Furman was 11 years old, maybe 12, when she first watched the Food Network show “Essence of Emeril” with her mother, Dora.

Mila and Mom kicked back at home in Skokie on that seminal day for the youngster, as celebrity chef Emeril Lagasse shared his “kicked-up” recipes with his viewers. Mila’s eyes grew, grew, and grew some more, morphing into the size of a pair of dinner plates.

Bam! Just like that, Mila knew what she wanted to do when she was old enough— and tall enough—to stand behind a kitchen counter and whip up a dish for her sure-to-be-enthralled television viewers.

“I saw myself on TV, as I sat on that couch next to my mom,” Furman, now 38 and a Lake County resident, recalls, adding she and her mother also watched the show Great Chefs of the World together. “It catapulted me, watching Emeril. It didn’t matter to me that most of the chefs on Food Network back then were men. I remember how excited I was that day when I turned to my mom and told her, ‘I want to do that!’

“After that there was never a minute when I did not think I would be on TV someday, teaching people how to cook.”

Mila Furman appeared on TV in 2020. Often. The grown-up girl/private chef in Girl and the Kitchen—which started as a cooking blog in 2013 and expanded with the launch of a boutique catering company, specializing in servicing many homes on the North Shore, four years later—is Furman. ABC7 Chicago’s Windy City LIVE featured the highly engaging, fun-loving wife of Mark and mother of two (daughter Charlie, 8, and son Marcel, 3) in a segment. So did WGN. And Fox Chicago. Windy City Live booked her for another segment. On February 9 she squared off as one of four chefs in a competitive pop-up kitchen outside a grocery store on the show Supermarket Stakeout.

None other than … Food Network.

Furman recently introduced her masterclass, “The 4-Step Cooking Method,” to Girl and the Kitchen fans. The four steps: learn, identify, apply, and practice. The course centers on technique, taste, and efficiency, rather than a specific recipe.

“My goal with this masterclass is to combat the common misconception that cooking is stressful or scary,” says Furman, who considers herself a writer first and a chef second. “Too often I hear people worried about a step of a recipe, or frustrated that they don’t have enough time to cook a healthy meal. With my masterclass, even the most timepressed home cook can pick up some great strategies and techniques to cut the 10 hours, on average, they currently spend cooking each week down to three, allowing them to focus on the things they love most.”

Born in the former Soviet republic Moldova, Furman and her family immigrated to the United States when she was 7. She attended Niles West High School in Skokie, acing cooking classes with ease and garnering plenty of attention inside and outside the classroom with her voice and sense of humor. 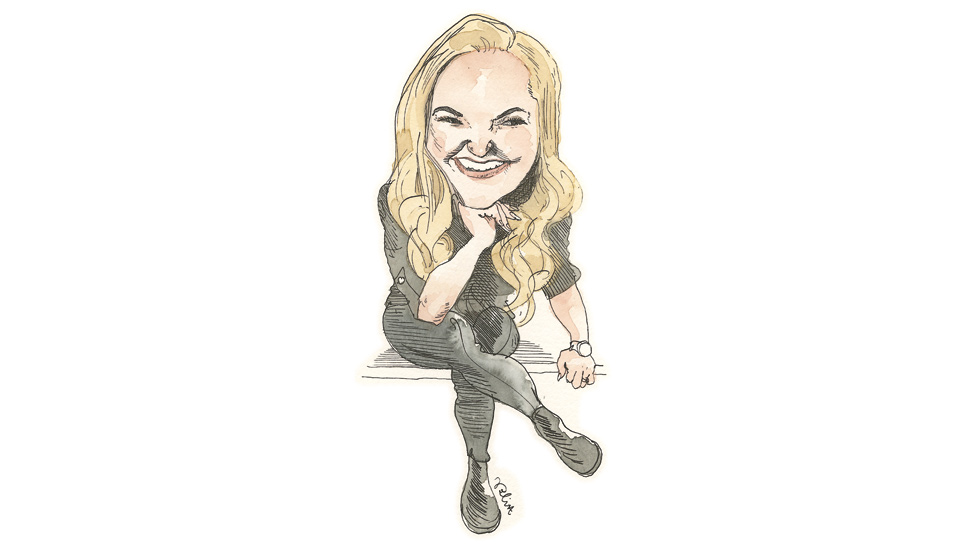 “I was loud and kind of a class clown,” she admits.

“For years my mom and I had planned to open a café,” says Furman, who earned a degree at Kendall College, a culinary arts and hospitality management school based in Evanston, before it relocated to Chicago in 2005. “A small café, nothing fancy. It would have been similar to a café we enjoyed in Skokie. My mom had a great sense of humor, as well as a strong belief that I should stand on my feet forever, without ever having to be dependent on anyone. And my grandmother (who lived to be 89) was tough, really tough. But she also was delicate.

“My grandma made the best chicken soup and taught me how to make it. She was also generous, to everyone. She had a favorite saying, which I love and follow to this day: ‘Smile and God will smile back at you.’ ”

Furman hung up her toque more than 10 years ago, taking a position as an executive administrative assistant with US Foods and serving the food service distributor for about five years. She planned events and meetings. But the kitchen was her wheelhouse, and she returned to it professionally. Smart move. She then hatched Girl and the Kitchen and its punchy mission: “Good Food. Done Right.”

Or, in other words, “Eat well and wholesomely.” She has amassed more than 2.5 million visitors to her blog, more than 11,000 Instagram followers, and more than 10,000 Facebook followers.

“I’ve been blessed,” Furman insists. “My husband has been incredibly supportive through the years, especially after my mother died and I headed to Kendall. For years, beginning when I was 8, I battled anxiety, fearing I’d fail no matter what I tried. I don’t fear failure anymore. I don’t fear hard work, either. I work hard so I can vacation three times a year with my husband and children.”

When Charlie was born?

When Marcel was born?

“My heart doubled,” she says.

“I love my children, dearly. Love everything about them. Charlie is 8 going on 38. Marcel is a Tasmanian devil.”

Mila Furman is a Moldovan made good—in the U.S.

“I was a little immigrant girl with a big dream,” Furman says. “I can’t emphasize that enough. Nothing was ever handed to me. I worked really hard for everything. Anybody can do what they want to do as long as they have a handful of wishes. I want to have my own TV cooking show someday; I want to go national. I also want to build a legacy for my kids.

“I built my company from nothing but hope and charisma.”

Visit girlandthekitchen.com for more information, including details about Furman’s new masterclass, “The 4-Step Cooking Method,” as well as registration for the free webinar