In mid-2019, her reputable family business in Wilmette, Heritage Trail Mall (now Heritage Trail Mercantile in Northfield) got hit with a harsh rent increase—double the previous cost to house the store’s antiques, home décor, collectibles, jewelry, artwork, gifts, and memorabilia—that necessitated a search for a new home. Months later, in January 2020, her husband, Ted, died suddenly after shoveling snow at their home in Ingleside. Meanwhile, securing approval to relocate the popular store in Northfield became even more challenging.

The pandemic forced Chrisopoulos to scrub her plans to stage the second grand opening in Heritage Trail’s history on June 1. A Heritage Trail Mercantile (HTM) soft opening in Northfield occurred on October 15.

“People have told me I’m good at giving advice,” says Chrisopoulos, whose parents, Joan and the late Gerald Carlson, owned the original HTM for more than 25 years as their retirement business before Chrisopoulos took the helm last year. “Some of those people told me, ‘It’s time to give advice to yourself.’ And that’s what I did. I told myself, ‘Don’t get stuck. Don’t believe your life is over as a 53-year-old widow. Believe it’ll all work out.’

“I don’t like to draw attention to myself. But a lot of people are inspired by my story, about how I overcame some struggles with incredible support from my family and friends. We’re all looking for good news after a tough 2020, right?”

Indeed. Chrisopoulos’s best friend from Honduras flew to Illinois last January to be there for a stunned Chrisopoulos, to hug Chrisopoulos, to listen to Chrisopoulos. Chrisopoulos’s real estate agent, Kiki Clark, stayed on top of paperwork deadlines and became fast friends with her resilient client. HTM’s loyal and appreciative vendors gathered to help Chrisopoulos and her staff remove the items from the old store in Wilmette last winter. “They all jumped in for me,” Chrisopoulos says. “I was out of it after Ted’s death (at age 63). Amazing. Our vendors, all 42 of them, I consider them family. And my husband, after the rent shot up in 2019 and my mom was dumbfounded and thought we’d have to close the store for good, told me, ‘You’re really good at this; you have to open another store.’

“I have the most amazing family and friends.” 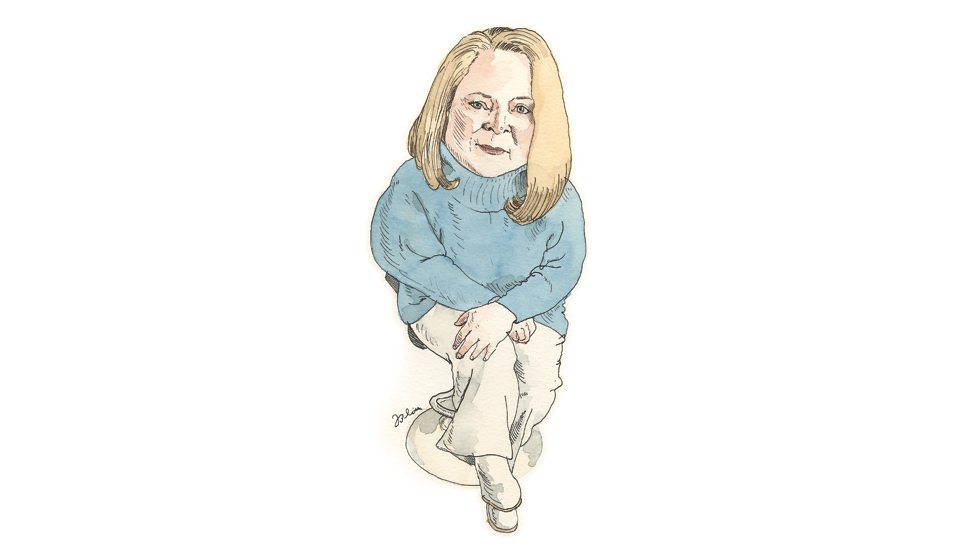 Chrisopoulos and her sister, Kirsten, grew up as daughters of auction-loving parents. Lisa’s vivid memories from stops at estate auctions include paying a quarter to purchase a junk box containing rabbit’s feet and buttons, among other items, and playing with the objects while sitting next to her sister on a floor.

“We went to so many auctions,” recalls Chrisopoulos, a 1984 Evanston Township High School graduate. “It got to the point where I believed people bought furniture only at estate auctions.”

Chrisopoulos earned more quarters—and coffee-stained dollars— years later, serving as a waitress at a nursing home in Evanston. She had written her birthday on the application form but not all of it, choosing to omit the year of her birth. Chrisopoulos got hired as a … 14-year-old. But the responsibilities never overwhelmed the youngster. The teen’s superiors loved her work ethic and promoted her to waitress supervisor two years later.

Chrisopoulos attended the University of Illinois and Kendall College, an Evanston-based school specializing in culinary arts and hospitality management that relocated to Chicago in 2005. She met her future husband, Ted, when she was a supervisor at a Marshall Field’s restaurant in the basement at Old Orchard Mall and he was a night-time building engineer. They’d occasionally cross paths at work.

“If you dangled anything that needed to be fixed in front of Ted, he’d fix it,” Chrisopoulos says. “He’d figure it out and fix it for you. He was the fixer. Very thorough. Want to guess why I haven’t had a new washer at home in years? Because Ted kept fixing the old one.”

He’d be proud of his wife’s indefatigable determination since Northfield’s Village Board accepted the Planning Commission’s recommendation and adopted the necessary ordinances for HTM to set up shop in Northfield. Shortly thereafter, Gov. J.B. Pritzker ordered state residents to stay at home (from March 21 to June 7) except for essential workers and trips for supplies.

HTM’s new, loft-like space is a 9,600 square-foot warehouse that was previously used to detail and store Ferraris. Sold HTM wares now vroom out of the place.

“While everybody else was buying all that toilet paper and all those hand sanitizers, I was buying paint for the new store, knowing contractors wouldn’t be able to enter the location for a while,” says Chrisopoulos, whose commute from unincorporated Ingleside takes about an hour. “Gallons and gallons of paint. About 100. I had to build it out; the building was a white shell. I have a friend, who owns a moving company. He and his two brothers helped me. We painted all summer. It was hard work; we’d start in the morning and work until it was almost dark.

“It helped me, not staying at home all those hours,” she adds. “It was good for my mental health, getting the new store ready, and it helped me deal with my grief.”

Heritage Trail Mercantile’s mission is to inspire its customers to curate their personal spaces with unique, original art, furniture, and home décor. HTM is frequented by local interior designers looking to snare that perfect piece for their clients. HTM—more designfocused in Northfield compared to its overall inventory in the Wilmette location—features five-foot-wide aisles, high ceilings, and ideal ventilation.

“People feel safe in the store, with the good lighting having something to do with that,” Chrisopoulos says. “Many people, I’ve learned, visit us just to feel good. In Wilmette, when our store was near Evanston Hospital, regular customers who underwent chemo treatment got through it by thinking, ‘Fifteen more minutes and then I’ll be able to stop by Heritage Trail.’

“One visitor told me, as he left our new location, ‘I didn’t buy anything, but I feel better now.’ I was OK when I heard that because it made me feel better.”

Heritage Trail Mercantile is located at 190-B Northfield Road in Northfield. For more information, call 847-256-6208 or visit heritagetrailmall.com