Nothing in a sports setting—not even the Chicago Cubs winning a World Series championship for the first time in 108 years—would top that feeling for the author and lifelong Chicago sports fan until late 2018, when his son Micah, then 11 years old, scored a hockey goal for the Pee Wee A Ridgefield (Connecticut) Bears.

“It’s incredibly satisfying, watching something like that,” says the 52-year-old Cohen, who was born in Lake Forest and grew up in Glencoe. “Better than that ’85 Bears team, better than that Cubs team in 2016. I’d gone through so many ups and downs with Cubs teams through the years; the title in 2016 was more of a relief than anything else, because those tough years had made me feel like a broken person. Someone sent me a video of a goal scored by my son. Micah scored it following a face-off. He took three strides and blasted a shot to a top corner. Then he celebrated on the ice. So cool. I watched the video 500 times. 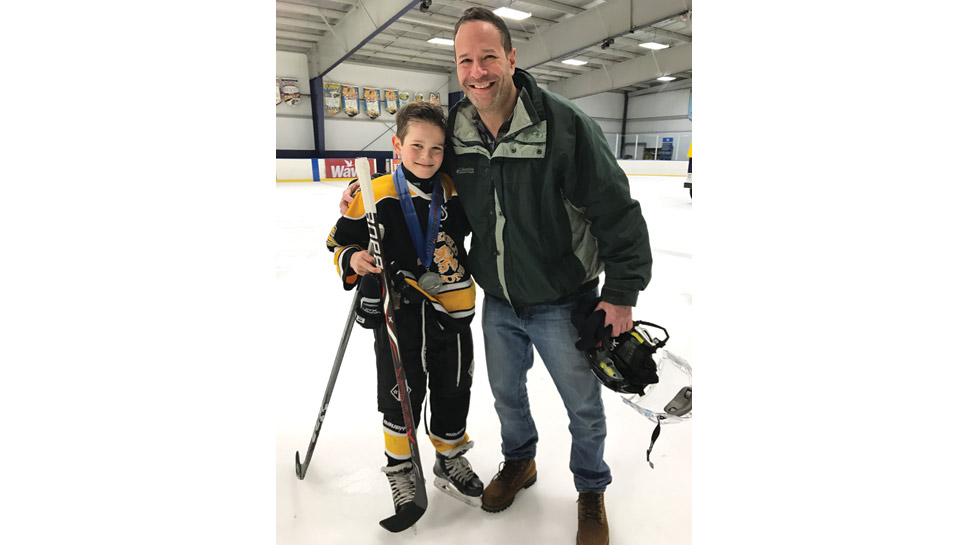 Author Rich Cohen with his
son, Micah, at their favorite
place, the hockey rink. 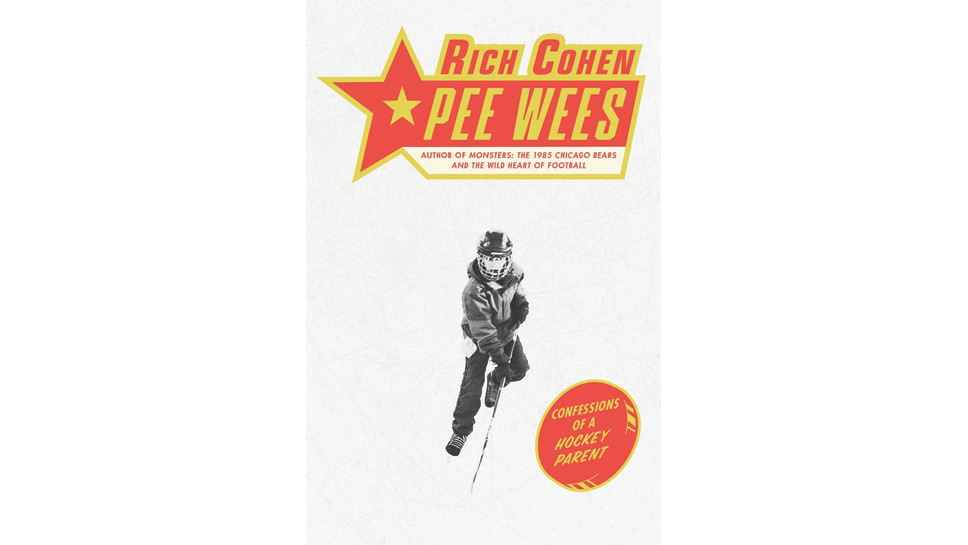 But only slightly, probably. Cohen is part highly engaged parent and part rabid Micah Cohen fan in his latest book, Pee Wees: Confessions of a Hockey Parent (Farrar, Straus and Giroux, 222 pages, set for release in January 2021). He essentially invites readers to find room in his hockey-gearladen vehicle and takes them on a season-long ride that starts in August 2018 and ends in April 2019. The Pee Wee A Ridgefield Bears club features 15 11- and 12-year-old boys and girls.

Rich, the father, endures a parent’s three stages of tryout grief—“Denial, anger, and acceptance,” he lists—and savors Ridgefield Bears victories, particularly the one in late 2018 that clinched the gold medal at the Can/Am Tournament in Lake Placid, New York. 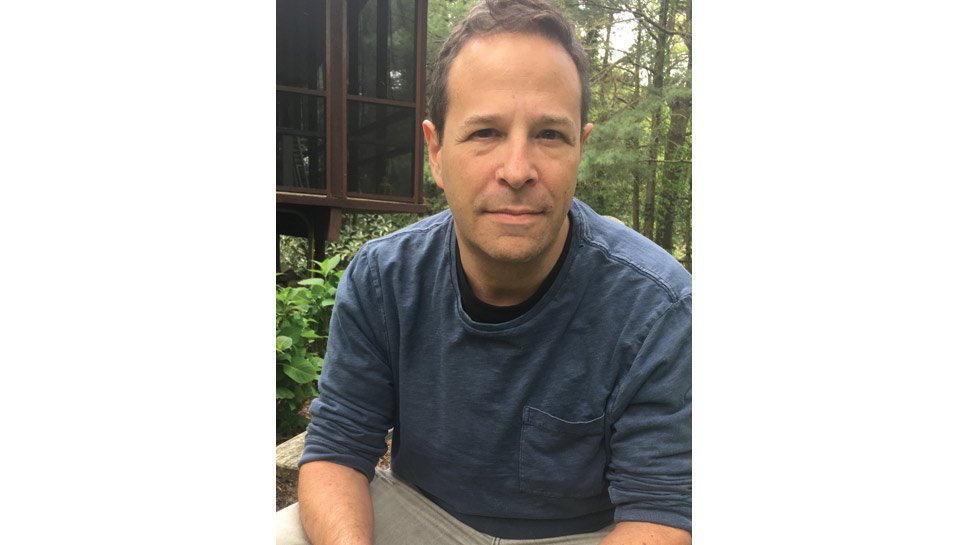 “My son and I experienced the highest highs and lowest lows of our lives together,” writes Cohen, also the father of sons Aaron, 16, Nate, 15, and Elia, 5, and a Ridgefield resident for about 10 years. He dedicated the book to his wife, Jessica, praising her for serving as a resourceful guide throughout an interminable hockey endeavor, “with its early mornings, ramshackle rinks, frozen weekends, road travel, injuries, freak-outs, panics, pleasures, and moments of self-love and self-loathing.”

Cohen opted to write Pee Wees because it’s a subject he cares about deeply. He began wielding a hockey stick for a North Shore powerhouse Squirt squad in the mid-1970s, a few years after his brother had taught him how to skate at a rink dubbed the Deerfield Bubble. Cohen would discover that a hockey parent in 2018 wasn’t anything like a hockey parent when bell-bottoms were must-wear jeans.

must-wear jeans. “It was a most vivid experience, Micah’s hockey season from start to finish,” says Cohen, a New Trier High school graduate who considers Deerfield Falcons youth hockey coach Jim Freeberg one of the best teachers he’d ever had. “And it provided good material. It’s like a photographer looking at something and thinking, ‘That would be a cool subject for a picture.’ Parents now are super, super involved, to the point where being a hockey parent is a big part of their social life. My parents, when I played hockey, basically dropped me off and after games they’d ask me three questions: ‘How’d you do?’ ‘Did you have fun?’ and, ‘What did the coach say?’ That was it.”

Cohen—also a contributing editor at Vanity Fair and Rolling Stone and the author of more than a dozen books, including Monsters: The 1985 Chicago Bears and the Wild Heart of Football (2013) and Lake Effect (2002), a memoir about growing up in Glencoe and his years at Tulane University—is the only professional writer among parents of the Pee Wee A Ridgefield Bears in the 2018-2019 season.

“It made me an oddball,” he writes. “When you tell people you’re a writer, they assume you’re unemployed. When they find out you actually earn a living, they chuck you on the shoulder and say, ‘Terrific!’ ”

Micah Cohen’s head hits the ice hard after a shove from an opponent during the 2018-19 season, prompting an ingame baseline test to determine if he had incurred a concussion. Rich Cohen vacates his spot in the bleachers to check on the status of his favorite Pee Wee wing.

“Micah failed the concussion test,” a coach informs the author near the team’s bench in the chapter “October.”

“We ask questions, things they should know,” the coach replies. “He couldn’t answer any of them.”

“I asked him your wife’s mother’s maiden name. He couldn’t tell me.”

“I couldn’t tell you,” Micah’s father shoots back. “What else?”

“I asked him where you and your wife had your first date.”

“We didn’t have a first date. We met at a Super Bowl party.”

Micah, a top-line winger before the injury, ends up missing two weeks of action and then finds out he’d been demoted to the third line. The coach’s decision angers Rich Cohen.

“It violated a philosophical tenet of every team from Mites to the pros: you don’t lose your position because of an injury,” Cohen writes.

But Micah isn’t angry. Nobody had taken his uniform or his stick or his skates. He’d still get to play the sport he adores with his friends. And his love for the game had never dipped below inferno intensity during the downtime.

“Micah,” Cohen says, “was the opposite of me that season. The level of team, his line, the number of shifts he played in games—none of that mattered to my son. None of it matters to him today. Micah just loves hockey. Loves it. Isn’t that the most important thing? The tendency of an athlete’s parent is to want to fix everything. But it’s important to let it go, to let your kid simply play and have fun.

un. “In the end, the best part of that season with the Ridgefield Bears was how much time I got to spend with Micah. That was such a great thing.”

Maybe even better than watching good ol’ No. 45—Micah’s jersey number—fire a puck past a goaltender.