One of my boys loves lamb, and this one-dish classic casserole—layering sautéed garden vegetables and gratineed whipped potatoes over the meat, is the perfect comfort dish to showcase ground lamb. We’ve spiced it with cumin, mint, Kashmiri chili powder, smoked paprika, coriander, and cinnamon. The dish works well with ground beef, too.

Versions of shepherd’s pie featuring beef or mutton topped with a potato crust started appearing under the name “cottage pie” in 1791 Britain. By 1854, it became more widely known as shepherd’s pie. The French were making similar “pies” in 1900 under the moniker hachis (for finely chopped) Parmentier (for Antoine-Augustin Parmentier, a big promoter of potatoes in France through the 18th century.) 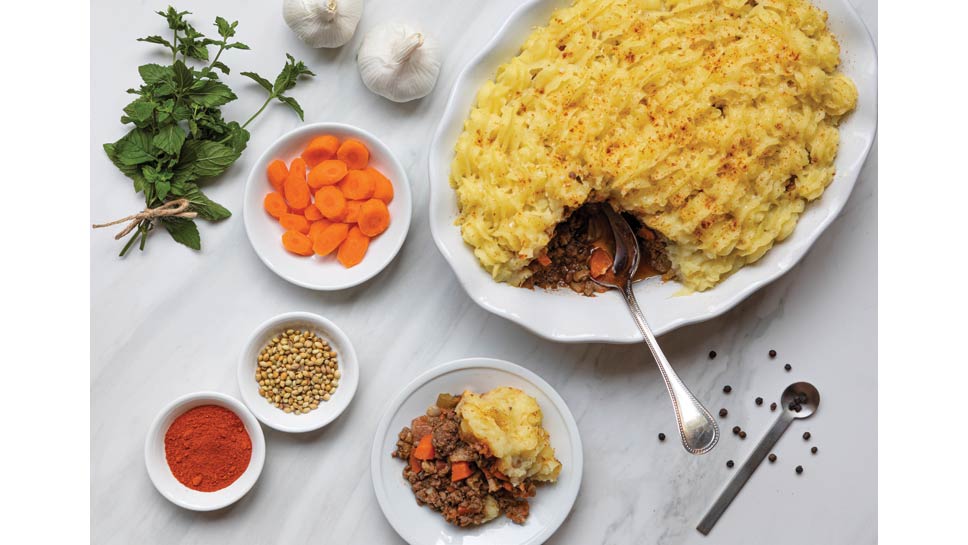 But whatever you choose to call it—this shepherd’s pie is truly delicious! To make the dish’s three layers, you will simmer potatoes and then whip them for the top layer, brown the ground meat (lamb or beef ) with garlic, onion, and the medley of spices for the bottom layer, and sauté carrot, more onion, celery, and tomato paste for the middle layer. I use a pastry bag to pipe the whipped potato over the layered meat and veggies. Then, sprinkled with a little parmesan and paprika, and popped in the oven for a few minutes to brown the crust, the dish is ready to serve.

A little bonus tip: If you don’t have a can of tomato paste in the house, you can make your own tomato paste using sun-dried tomatoes! Just pulse the tomatoes in a food processor with a few tablespoons of water to create a nice paste. I actually prefer the flavor of this “homemade” version over canned.

A few grinds of black pepper

3 pounds of potatoes (I used small yellow) peeled, and sliced into quarters

In a second skillet over medium heat, sauté the other half of the chopped onion with the chopped carrot and celery. After browning for five minutes, add 1/2 cup of water, add 1/2 cup of tomato paste, stir and cover. Reduce heat to low and simmer until softened.

In a large kettle, cover the peeled and sliced potatoes with water. Heat to just below boiling and simmer for 12 to 15 minutes until potatoes are cooked through, but not overcooked. Dump potatoes into a strainer. In the stand bowl of a mixer with the whisk attachment, whip potatoes with 1/4 cup of butter until light and fluffy. Transfer potatoes to a pastry piping bag.

In an oval oven-proof casserole dish, layer the meat mixture on the bottom and top with the cooked vegetable medley. Pipe the potatoes over the top. Preheat oven to 400. Sprinkle the potatoes with parmesan cheese and paprika. Heat in oven for five to 10 minutes until cheese and piped potatoes have browned a bit. Serve immediately.