A dinner in the Krex household in Glenview typically doubles as a business meeting. All three family members—Parker Krex and his parents, Steve and Erin—have a stake in the Deerfield-based company Brick Loot, which offers subscription boxes and custom sets for LEGO fanatics and other toy brickbuilding enthusiasts.

The enterprise’s mission is to celebrate and enhance the building experience for brick builders worldwide.

Erin and Steve Krex serve as president and vice president/prime investor, respectively. Parker Krex owns the title of Brick Loot Chief Entertainment Officer. Parker, 16 years old and a Glenbrook South High School junior, launched the company in 2014 at the tender age of 9, meaning he’s been a bona fide business boy for nearly half his life.

“All business, all the time,” Parker says of the branding and bottom-line discussions in between fork lifts and sips and napkin blots to the mouth at dinnertime. “I’m the boss, technically, of my parents.

“I occasionally shoot down their ideas.”

SUBTA lauded Krex for “constantly evolving” Brick Loot and his pursuit of innovation.

“I’m obsessed with LEGO, even at 16,” says Krex, who first played with LEGO at the age of 3, and, after turning 4, started reviewing his sets on YouTube. “Our basement is entirely devoted to LEGO. I’ve always enjoyed playing and building. I like getting new sets, building big stuff. I spent 12-plus hours building the Batwing, Batman’s aircraft. It took 3,000 pieces to construct it, and it’s something I consider a big accomplishment.”

The creation of Brick Loot stemmed from deep dissatisfaction, shortly before Parker celebrated his 10th birthday. A gamer subscription box had arrived as an early birthday gift in late July more than six years ago. An exuberant Parker opened it and found a comic book inside, along with a pair of socks, a DVD, and … air freshener.

Erin Krex nodded twice. Steve Krex listened to the ensuing pitch—think Shark Tank at the hyper-local level, under the Krex’s roof—from Parker and Erin and agreed to back the endeavor financially. 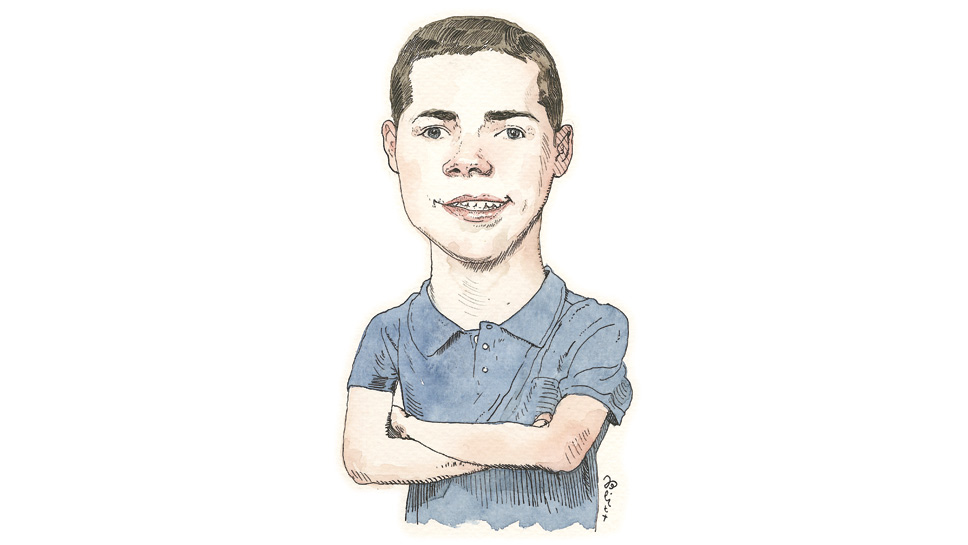 It’s not unusual for Brick Loot to ship 1,000 subscription boxes in a month. And its retail store, which is located on Pfingsten Road in Deerfield and opened in 2016, features more than 4,000 rare and unique minifigures on display. Parker Krex comes up with a subscription-box theme each month in his office at home, where the student with the 4.0-plus GPA also completes his schoolwork, including studying for his finals in Advanced Pre-calculus, AP U.S. History, and Honors Chinese earlier this month. One subscription box was Hollywoodcentric, and others contained items related to racing and CEO desks. Krex hasn’t reached AFOL (Adult Fan of LEGO) status yet, but it looks like he’ll get there and stay there. For decades.

“At the beginning, I was thinking, ‘Oh my gosh, I’ll be the next Bill Gates,’ ” Krex says. “I know now that won’t happen. I had a wild imagination back then; I was 9.”

But Parker Krex, like Bill and Melinda Gates, has a philanthropic side. Brick Loot has donated more than 23,000 brick toys—17,000 in 2020—to Lake Forest-based Fill a Heart 4 Kids, an organization that gives unaccompanied homeless youth, at-risk children, and foster children educational support, necessities, and positive experiences to help their hearts heal and restore their dignity.

“Every holiday season it’s great to be able to make kids smile by giving them toys,” Krex says. “Those kids have very hard lives, especially now with COVID-19 going on. They’re struggling, looking for hope. They’re confined constantly, without opportunities to shop or buy toys. They deserve the opportunity to open at least one gift and have some fun with it.”

As COVID-19 nears its one-year mark in the U.S., Krex, like the bulk of his peers, misses the things he used to take for granted—hitting up the mall, for one.

“It’s weird, not being able to go out and simply walk around places like I did before the pandemic,” admits Krex, who has chosen the ELearning option since the start of Glenbrook South High School’s 2020-2021 academic year. “But I don’t have a lot of free time these days, not even at home. Free time? I honestly don’t know what that is. I’m always either doing homework or working on a Brick Loot project.”

“I look at everything—all sides, all points of view,” Krex says. “I then pick the best possible option and go with it.

It’s a tremendous guess. Guess what Parker Krex is thinking about studying in college, beginning in the fall of 2022?

Go with law, young man. You earned the equivalent of an MBA years ago.

Brick Loot is located at 151 South Pfingsten Road, Suite E, in Deerfield. For more information, or to order a subscription box or a custom LED lighting kit for LEGO sets or brick and minifigure sets, visits brickloot.com.