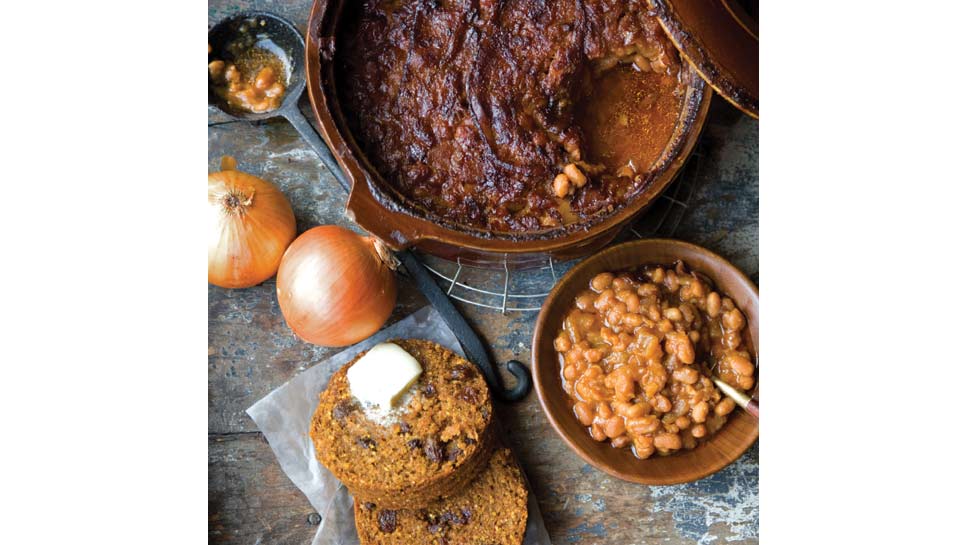 The American Common Bean category includes many beloved, native-to-theAmericas beans—navy, red kidney, pinto, great northern, marrow, and yellow eye, plus garden variety edible-pod beans (string, stringless and snap). It’s not clear which of these the New England colonists first stewed in a pot, but we do know baked navy beans started with Native Americans. The Narragansett, Penobscot, and Iroquois wrapped navy beans in deerskins—or put them in earthenware pots, along with venison, bear fat, and maple syrup and then baked the lot in hot-stone-lined pits. Puritans eschewed the deerskins but took to bean-pot cookery because the long, Eventually molasses—the sticky-sweet sugar-refining byproduct used to make rum in colonial Boston, found its way into the beanpot, sealing the beans-and-Boston partnership that lasted long after no-cooking-on-Sabbath waned.slow cook times meant the dish could be prepared a day ahead, and in so doing, stick to Puritanical no-cooking-on-Sabbath rules.

Molasses was also used to make brown bread, itself an adaptive-use product Colonists created due to the shortage of wheat flour. Wheat didn’t grow well in the Colonies, but rye and corn did. So to stretch what wheat they had, the Colonists created “thirded” breads—made with equal parts corn, rye and wheat flour. Earliest examples of the resulting loaves were yeast-raised and less sweet, but sometime later in the 19th century, the pudding-like practice of sweetening the bread with raisins and more molasses and steaming it in a mold, became common.

It’s astonishing that such a hearty grain trio—rye, coarsely-ground corn, and whole wheat—yields such a moist, tender, and flavorful loaf! But putting those dry ingredients with molasses, baking soda, and buttermilk works food-chemistry magic. The finished bread most closely resembles the best bran muffin you ever had.

Our recipe for Boston Baked Beans is a standard I’ve used for years. The biggest challenge you’ll have with either of these recipes is that they take time. For best results with the beans, you’ll need to soak them overnight and then slow-bake them in the oven for 7 or 8 hours (cut that to 5 to 6 if you have a convection oven.) And it will take you a good hour-and-one-half or more to steam the bread. The results are worth it.

1/3 cup BBQ sauce (NOTE: you could use tomato ketchup, but your favorite BBQ sauce will be zippier)

Make beans: Wash and pick over beans, removing any debris. Place beans in a 5-quart pot. Pour 3 cups boiling water over the beans. Soak. As beans absorb the water, add cool water to cover the beans by 2 inches. Continue to soak overnight.

Next day, pour out the bean-soak water, rinse, and add fresh water to cover the beans by one inch. Add baking soda and heat water to boiling. Reduce heat to a simmer and simmer 15 minutes. Preheat oven to 275. Add onion and other ingredients to the pot you will be baking the beans in. Add the beans and liquid. Stir in the chopped bacon. Stretch three strips of bacon over the top. Cover the bean pot with its lid. Bake for 7 to 8 hours (5 to 6 hours if you have a convection oven) until beans are tender. During the last hour, remove lid of the bean pot and bake uncovered, in order to form a nice crust on top of the beans.

During the last few hours of bean-baking, make your brown bread. Combine the cornmeal, wheat flour, rye flour, soda and salt in a large mixing bowl. Stir in the oil and molasses. Stir in the buttermilk and eggs. Sprinkle in the raisins and stir just to combine Use a safe-edge can opener to open two large cans (6-inches tall, 3-3/4 inches across), saving the tops. Once you’ve cleaned the cans out, grease both the insides of the can lids, and the inside of the cans very well. Divide the batter between the two cans. Replace the lids and then firmly wrap the top third of each can with aluminum foil. Boil about 10 cups of water in a large stockpot (water should be to a depth of about 3 inches.)

Carefully place the two batter-filled cans in the water. Turn heat under the pot to low until water is very gently simmering. Cover the stock pot containing the batter-filled cans; steam the bread for 1-1/2 to 1-3/4 hours, replacing evaporated water with a little more boiling water if needed. Remove the foil and lid on one of the loaves. If the bread springs back when touched, and if a toothpick inserted into the top of the bread comes out clean, the bread is ready. (If not, replace the lid/ wrap and steam a little longer.) Remove the cans of bread. Cool on a rack for a few minutes. Turn the loaves out. Slice thick rounds of the bread and serve hot, with the beans.