Gene Hara has held several titles in his lengthy and highly successful career at Banner Plumbing Supplies Inc.—from bookkeeper only two days after graduating from the University of Kansas in 1993 to the position of co-partner that he retains today.

But the title that the lifelong Highland Park resident cherishes more than any other is one that you’ll never see on a business card: Dad.

“I enjoy everything about being a parent,” says the 49-year-old Hara, the father of son Parker, a 19-year-old freshman at New York University, and daughter Bailey, 17-year-old student at Highland Park High School. “I love watching them grow, develop relationships with friends, mature, and learn. They’re both very good students. I’m extremely proud of both of them, and I consider them dear friends.

“To them, though, I’m probably just that guy who has an insanely sarcastic sense of humor and likes to tell corny jokes.”

Not likely. Humble Gene Hara is much more than that, with plenty of incontrovertible evidence available for all to see.

Hara’s leadership style at Banner Plumbing—he manages the company’s Buffalo Grove branch, with the other co-partner heading the company’s Chicago site—must have something to do with multiple employees working in at least their 20th year for an industry leader that opened its doors on Chicago’s South Side in 1946.

Plus Hara has answered the call to serve others for most of his adult life. Recent examples include being a mentor in Highland Park High School’s INCubator business classes during the 2018-19 school year; guiding the bulk of Banner Plumbing’s efforts to donate dinners and hand sanitizers to frontline personnel at three hospitals—Highland Park, Lake Forest, and Rush Medical Center in Chicago—during the early months of the pandemic; and taking on the role of fundraising point man in Banner Plumbing’s presenting sponsorship of the Park District of Highland Park’s SMILE program, which provides funds to families that can’t afford fees to participate in park district offerings.

“Giving was important to both of my parents when I was growing up,” says Hara, the youngest of four children of Judy and the late Sherwin. “My dad always did what he could to help others, and I wanted to continue his legacy and pass it along to my kids at the same time. My kids have been generous with their time for others. Before we donated those meals, Bailey called to find restaurant partners and alerted the hospitals of our plan. Both Bailey and Parker have been involved with HEEF (the Harold E. Eisenberg Foundation),” which is committed to embracing life’s challenges through gastrointestinal cancer research and education.

A young Gene Hara seized—and appreciated— each opportunity he got to spend with his father during his father’s workdays as owner of a car dealership on Chicago’s South Side. Before receiving his driver’s license, Gene joined his father for the commute on most Saturdays for a couple of years and worked in the dealership’s accounting office as a bookkeeper. Gene then drove himself to work right after school throughout his junior and senior years at Highland Park High School, often toiling over numbers until 9 p.m. 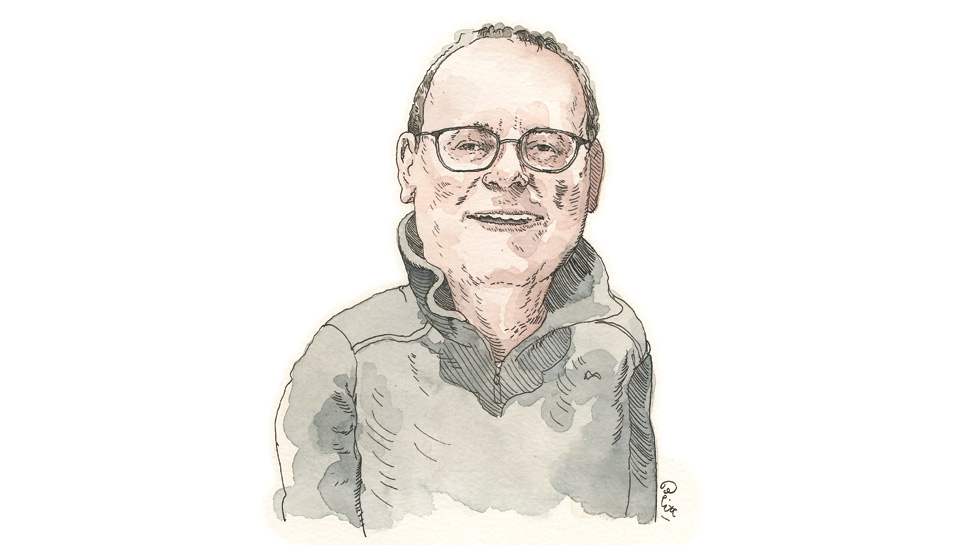 “I learned a ton at the dealership, which was not far from our Banner Plumbing location in Chicago,” says Hara, who earned a degree in h u m a n development at the University of Kansas. “I was a sponge around my father, even during our dinner conversations. And I saw and admired my dad’s great work ethic. He owned the dealership, but he was a CPA by trade. We’d talk about anything and everything on our rides to work. He’d share with me stories about his customers at the dealership, and he’d discuss situations involving his employees and how he had resolved them.”

For about 90 percent of each workday at Banner Plumbing—deemed an essential business at the outset of the pandemic—Hara can be found working, by choice, in a cubicle, just like the staffers who report to him. He’s a straight shooter, a tell-it-like-it-is manager. But he’s also a good listener, brimming with empathy. His company boasts more than 125,000 square feet of warehouse space to accommodate the trade and a 15,000 square-foot, awardwinning state-ofthe-art kitchen and bath showroom. People have been putting more money into their homes during the pandemic because they’re spending more time than ever there.

“Not one layoff because of COVID19,” says Hara, who’s still grateful that, after nearly five years as a bookkeeper at Banner Plumbing in the 1990s, owner Lee Greenspon allowed him to make big picture decisions and become more than “just a pencil guy.”

“Today,” Hara adds, “we continue care about the big picture, along with our customers’ and employees’ experiences. We’re not a million percent driven by the bottom line, and we’re not a cut-throat business; we’re concerned about doing the right thing all the time.”

What Hara’s father, the consummate people person, liked to do incessantly and earnestly: approach people from all walks of life and get them to divulge their life stories to him by using his disarming demeanor. Sherwin Hara, who died in 2013 at age 75, might have paced the Western world in acquaintances made.

“My dad was a smoker who, when our family was eating out, liked to leave our restaurant table for a smoke and then talk to anybody who happened to be outside,” Hara, also personable, recalls. “Doormen, valets, other diners, anybody. He had this wonderful knack for connecting with people immediately. He’d return to our table five minutes later and tell us all about the stranger he got to know so well.

Chuckling with his children has heartened Hara since then, be it during two-hour, highly engaging dinners at home or—in pre-pandemic times—nights at comedy clubs and concerts. The trio attended a Jerry Seinfeld performance in Chicago.

“Experiencing the arts has always been of love of mine, especially when I get to do it with Parker and Bailey,” Hara says. “I also loved watching Parker play in hockey games and Bailey compete in cheerleading events.”

Parker suited up and skated for Highland Park Giants Hockey Association games for three seasons. His father served the program as a team manager, a board member, and chairman of the rules and ethics committee.

Three more titles. A hat trick, off the ice.

But none came close to supplanting the title of “Dad” at the top of Gene Hara’s list.