Despite being the woman behind a thriving business, Graziela Gems founder and jewelry designer Graziela Kaufman finds her truest success in the balance of work, family, friends, philanthropy, and, oh yeah, a little bit of time for herself.

“When I feel it’s all balanced, I feel successful,” she says. “My heart, mind, and soul have to be fulfilled.”

As a self-described positive and determined person, Graziela takes calculated risks to get to the next level. One such risk was moving to the United States after growing up in Brazil. She’d been visiting the United States since she was a child and then lived in New York for six months in her 20s and in England for one year.

Both stints overlapped with the winter so, “The cold weather wasn’t new for me,” she explains about eventually relocating to Chicago.

But she does miss her family and tries to keep the Brazilian culture alive in her North Shore home (her family moved to the North Shore 17 years ago) through food and language. She also takes her family—husband John and sons Nelson (25), Johnny (20), Kevin (19), and Kristopher (17)—to Brazil at least once a year so her kids are able to consider the country as a second home. Luckily, they all love to do the same things, despite having different personalities. 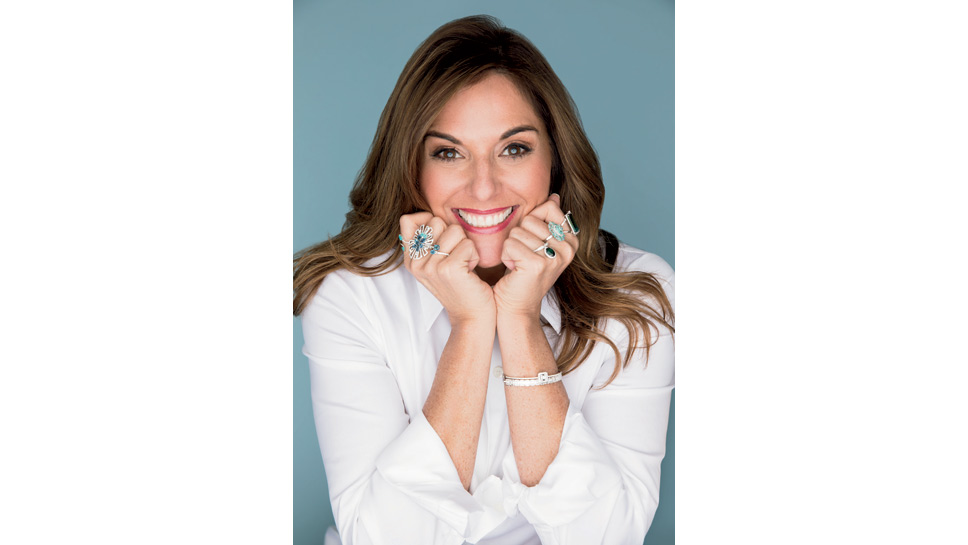 “We love to watch movies or shows, play poker and board games, play charades after dinner, exercise, and in the summer spend long days by the pool grilling, and take the dogs and cat for a walk down to the beach close to our home,” Graziela says. “Yes, my cat walks on a leash.”

An animal lover, Graziela has a rescue Bernese Mountain Dog, one Savannah feline, a 13-year-old Yorkipoo, and a new rescue named Frankie. Graziela met her husband 22 years ago on Fisher Island, where both of their parents had vacation homes. What she’ll say about their story is that it involved 16 trips to Brazil in seven months, a hurricane, an almost called-off wedding, and eventually an unforgettable dream wedding. 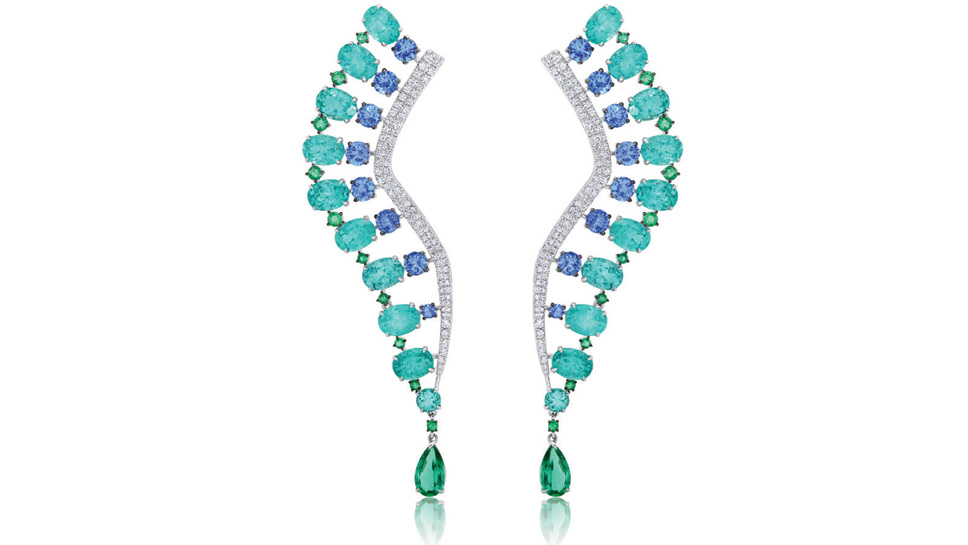 “My heart is half-American, half-Brazilian,” Graziela says. “I actually feel that having a Brazilian around was sometimes a bigger shock to the community than moving here was to me.” 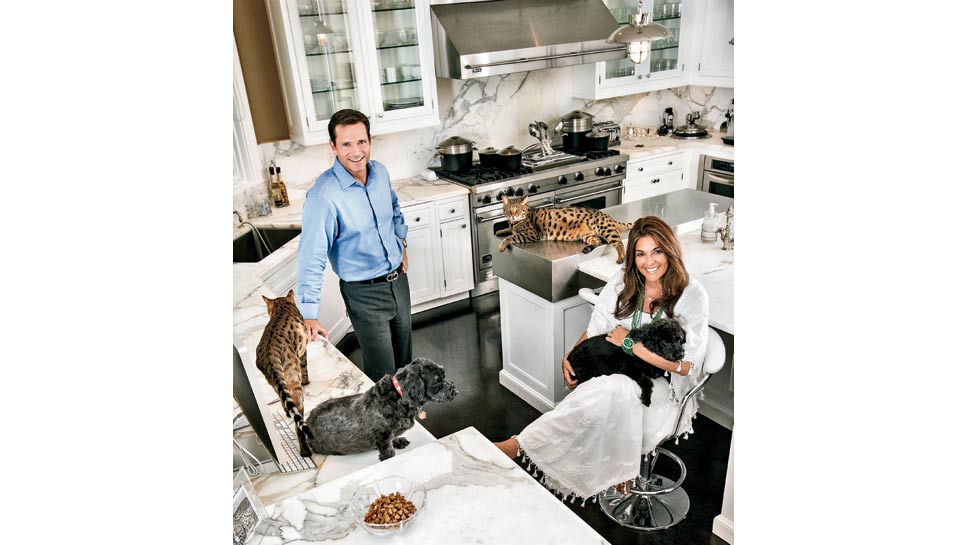 John and Graziela Kaufman in their kitchen with their pets as photographed for the
Chicago Pet Project—a collaborative fundraising effort produced by the Puppy Mill
Project. PHOTOGRAPHY BY K MORGAN PHOTOGRAPHY.

Much of Graziela’s aesthetic and inspiration today comes from Brazil, which is the largest producer of gemstones in the world. “It’s ingrained in my soul,” she says. “Colors, energy, movement, curves, sexy shapes, nature, breathtaking landscapes—I lived in a visual paradise. Growing up, my ‘backyard’ was a gemological treasure. My Brazilian ‘roots’ are evident in all of my designs.”

It all started when she hired a PR firm and started meeting stylists and celebrities, many of whom became close friends. Graziela is also making a profound impact in the community through her charitable contributions to make a difference in the lives of homeless and abused animals.

She’s involved in several organizations that help rehabilitate animals of all sorts—like MCP Rescue (where she is vice president) and The Puppy Mill Project—and even donates a portion of her sales to help further that mission. In 2020, she designed the Pawsitivity Collection partnering with celebrity friends who share her passion for animals. Thirty percent of the sales price of each piece is donated to a rescue selected at checkout. Kaley Cuoco’s charity of choice is Mutt Scouts, Olivia Munn’s is Love Leo, Nikki Reed’s is Rancho Relaxo (which saves farm animals around the world), Beth Behrs’ is the wonderful horse rescue ranch Blue Apple Ranch, and Graziela’s is MCP Rescue and Outreach in Chicago.

“I believe that each of us in this world can make a difference and that we have to fight for what we believe in,” she says.

To that end, Graziela found a kindred spirit in actress Nikki Reed, who she met six years ago through their common love of animals. “We felt an immediate connection and decided to do something positive with it,” she shares. “I designed a collection inspired by our planet, our animals, our oceans, and by Nikki and Ian Somerhalder (Nikki’s husband), where 60 percent of all the profits went to the Ian Somerhalder Foundation.” The collection is sold only through Graziela’s website and features Nikki and Ian’s favorite gemstones: turquoise, jade, and jasper.

One of Graziela’s personal favorite gemstones is the Paraiba tourmaline. “From the time I saw it to this day, I have never seen anything like it,” she says. “It was discovered in Brazil, and it’s extremely rare. It’s so alive and electric that it’s mesmerizing.”

Graziela’s “Something Blue” collection has plenty of Paraiba gems that range from the Brazilian Paraiba, which is the rarest and most expensive of them all, to Mozambique Paraiba. The gems are only found in three places in the world and are very difficult to extract. Nevertheless, in 2017, Graziela decided every woman that purchases a piece of Graziela jewelry should have one to three Paraiba pavé stones encrusted somewhere in their piece, and she began adding them to her couture designs and necklaces.

“My goal is to have every woman that buys one of my pieces feel as rare as the stone itself,” she explains.

But ultimately, Graziela doesn’t have a favorite collection, as every collection comes from her heart. “From the time I design a collection to when the collection is ready takes approximately three months,” she says. “So much time and effort of our incredible team goes into the making of a piece of jewelry that sometimes I think we are all crazy, but when we finally see the finished product, it’s magical.”