Not Patrick Mahomes. Not Aaron Rodgers.

Not even a Chicago Bear.

“Coach John Holecek helped me with the uniform,” Genevieve Atwood, Brian’s mother, says, referring to Loyola Academy’s varsity football coach. “It was a little too big.

A better fit? Genevieve Atwood and the position of vice president for athletics and fitness that she holds at Loyola Academy. The pairing of the versatile professional with a multilayered occupation continues to look and feel right, sort of like Atwood’s hand in the broken-in catcher’s mitt she wore comfortably to secure pitches when she played softball at Woodlands Academy in Lake Forest.

The director of admissions at the Wilmette-based Jesuit college preparatory high school from 2008 to 2018 and an employee at Loyola Academy since 2004, Atwood, 49, landed the full-time athletics post in February 2019. The former three-sport prep athlete and Loyola Academy cross country/track/lacrosse coach had served as the school’s interim VP for athletics and fitness for about six months after predecessor Patrick Mahoney’s resignation.

Holecek, a two-time Class 8A state championship football coach, lauded Atwood for her efforts and leadership and insisted that she vie for the permanent position at the top of Loyola Academy’s Athletics Department.

“I got into education because being in a classroom was an attraction,” says Atwood, a former teacher at St. Mary of the Woods School in Chicago, Northbrook Junior High School, and Loyola Academy. “Seeing students develop from the first day of school to the last day excited me. Now I get to watch our athletes develop, not only in sports but also as young men and women. I’ve been so impressed with our athletes during the pandemic. Our athletes in sports that were allowed to participate in the fall were grateful for the opportunity, but they also showed empathy toward those on campus whose seasons were postponed.” 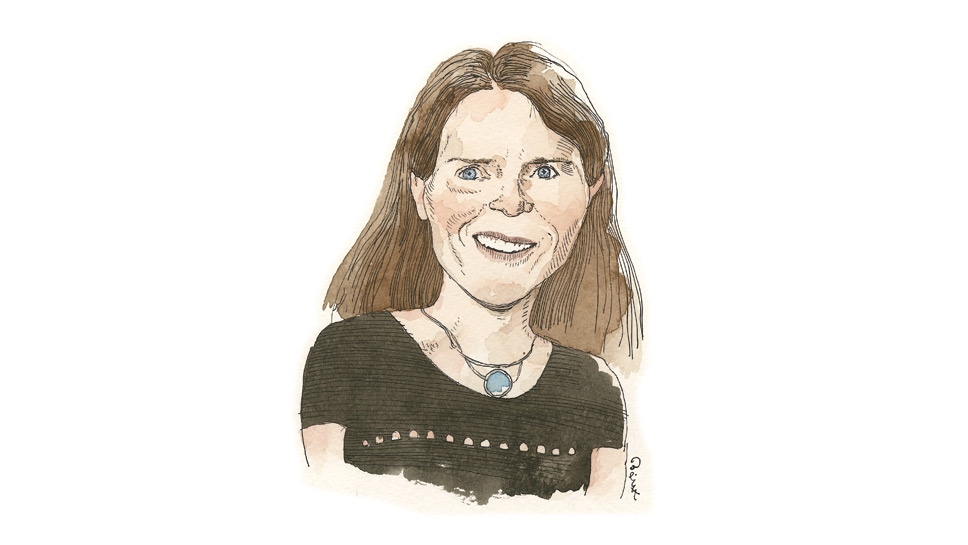 Concerns about the pandemic ended Loyola Academy’s boys basketball season in mid-March, after it had reached a Class 4A sectional final against Evanston Township High School in Arlington Heights. The news devastated Brian Atwood—and not just because Mangan was a member of that team, too. Genevieve’s youngest of three children, along with all in Rambler Nation, knew his favorite hoopsters had a legitimate shot at capturing state hardware for the first time in program history.

“It was disappointing for many, at first; we’re all human,” Genevieve says. “Our program had earned the right to play in that big game, with thoughts of playing more games in the playoffs. Think about athletes: They’re used to rising to the occasion, to facing obstacles and overcoming them. But our Jesuit education provided a great platform for accepting the pandemic. Something greater was at work when we had to give up a basketball game.

“Our student-athletes,” she adds, “focused on what they had instead of what they didn’t have, and they felt thankful. They became fully aware of the illnesses and deaths, of the sacrifices people were making—sacrifices that you couldn’t compare to canceled games or postponed seasons. Don’t look for a pity party around here, because you’ll never find one. We’re resilient, on a number of levels, and patient. We remain hopeful and positive.”

Atwood grew up in a large family in Glencoe and attended Sacred Heart School in Winnetka before enrolling at Woodlands Academy. One of Jim and Barbara Baisley’s seven children, Genevieve earned three varsity letters in both basketball and softball, and she suited up for one season in volleyball. As a power forward, Atwood helped a Woodlands Wildcats basketball squad upset Class A opponents during a deep playoff run. Her husband, Bob, caught for Michigan State University baseball teams. Brian Atwood and the couple’s other two children, Mark, 11, and Maeve, 10, are active in a slew of sports and activities. Maeve is an Irish dance performer.

While growing up on the North Shore, Genevieve relished every chance to compete against her brothers in a range of sports. A Wilmette resident since 2008, she has been a regular New Trier Aquatics masters swimmer for years, working out with teammates up to three early mornings a week in Loyola Academy’s pool at the John D. Norcross ’54 Aquatic Center.

“I was into sports in high school more for the experiences than I was for anything else,” says Atwood, whose brother Jamie Baisley captained an Indiana University football team as a middle linebacker, and whose nephew Jimmy Murray plays center for the New York Jets. Niece Hope Baisley is a senior defender for the women’s soccer team at Fordham University in New York.

Genevieve was Mr. and Mrs. Baisley’s fourth daughter to attend St. Mary College in South Bend, Indiana, where she majored in English and minored in political science before earning her master’s degree in education at DePaul University. For four summers, beginning in 2000, Atwood taught English at Loyola Academy before welcoming her students at Northbrook Junior High School students in the fall. “I was drawn to the Catholic school setting at that time in my career,” Atwood says. “That was a huge attraction for me.”

Atwood applied for an opening in Loyola Academy’s English Department and got hired. One position led to another and to another and to several others. She also worked in the school’s O’Shaughnessy Center, which provides a structured, nurturing academic support system to promote lifelong independent learning and literacy. Atwood served as an assistant dean of student life as well, in addition to guiding athletes in three sports and heading the academy’s Admissions Department.

“I had not anticipated having the opportunity to be Loyola’s VP for athletics and fitness,” Atwood admits. “But, once I started doing it, my thinking became the thinking I’d had in every position at Loyola. That is, ‘Do your job, work hard, and hope good things will happen.’ I enjoy challenges. I enjoy challenging myself. And the best part is getting to do this while working with great people—Loyola Academy students, coaches, and administrators, as well as the wonderful families in our community.”