Thirty years before the onset of COVID-19 in the United States, Kevin McCallister screamed, “This house is so full of people, it makes me sick!”

Later, after being picked on by siblings Buzz, Megan, Linnie, and Jeff, he wished they’d all disappear.

Actor Macaulay Culkin portrayed the rambunctious and clever and cunning 8-year-old boy in the 1990 Christmas movie Home Alone and screeched that mean-spirited line on a night in which his Winnetka house contained a combined 15 immediate family members and other relatives.

The next day he found himself healthy and at home, all alone, and familially distant by considerably more than six feet. The other 14 had unwittingly boarded a flight bound for Paris, France—more than 4,000 miles from the North Shore village—without the youngest child in the McAllister family. Kevin had been forced to sleep in the attic as punishment for having ruined dinner.

“I made my family disappear,” a stunned Kevin theorized amid the emptiness of the house located a stone’s throw and a short punt from the Winnetka Community House.

But Kevin McCallister would also become scared and lonely and sad in his brief run as head of household. He longed for festive interactions with his family while noticing a neighbor’s holiday bash. He welled up in his parents’ bed as he held and eyeballed a framed portrait of his family.

“Instead of presents,” Kevin said later to a Santa portrayer, “I just want my family back.”

Fast forward to 2020, late December, the 10th month since the World Health Organization declared COVID-19 a pandemic. Family members of all ages and in all parts of the country are feeling scared or lonely or sad—or all three emotions at once—because of threats associated with the pandemic and measures taken to mitigate its spread. Millions have stuck to their holiday traditions regarding travel and family gatherings, while millions more have accepted the altered plan of staying put and hoping for a postvaccine family reunion in December 2021.

AAA predicted last week that about 85 million people in the United States will travel between December 23 and January 3, mostly by car. That would mark a drop of nearly one-third from a year ago, but 85 million is an alarming figure to folks. It’s roughly the population of Germany. The Centers for Disease Control and Prevention, meanwhile, says, “postponing travel and staying home is the best way to protect yourself and others from COVID-19.” 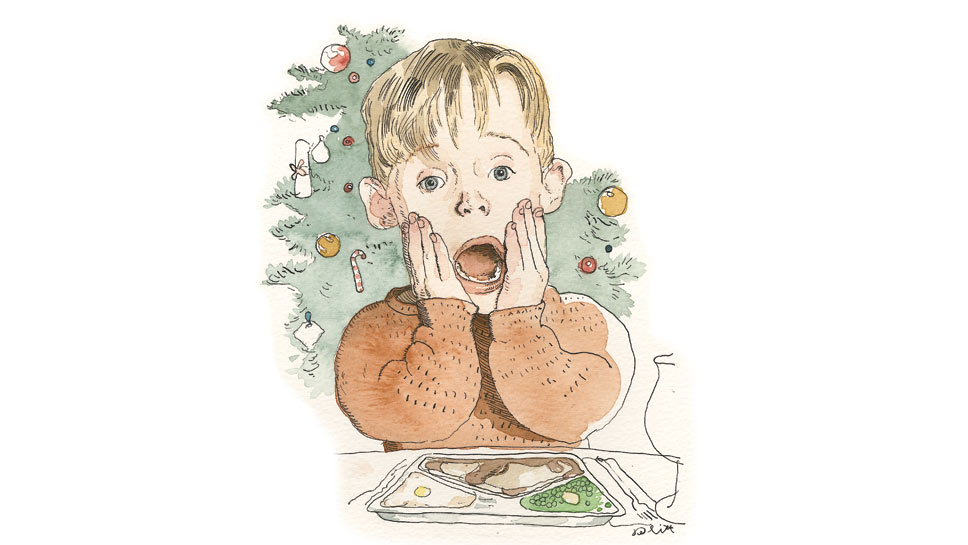 Kevin McCallister did an admirable job protecting his family’s house in Home Alone, much to the distress of burglars Harry (Joe Pesci) and Marv (Daniel Stern). The heart of the movie, however, was Kevin’s gradual realization that nothing could replace the preciousness of hours spent with family during the most wonderful time of the year. From December 22 until Christmas morning, the inside of the McCallisters’ massive house at 671 Lincoln Avenue eventually mirrored a hollow prep school in the middle of winter break to Kevin.

“I’m the man of the house!” he declared to nobody early in his time alone at home.

The late John Hughes called Northbrook home, beginning in 1963, and attended Glenbrook North High School. Hughes wrote and produced Home Alone and directed many other films, including Sixteen Candles and Planes, Trains and Automobiles, that were shot along the North Shore. A longtime resident of Lake Forest, he died in New York in 2009, at age 59. He was buried at Lake Forest Cemetery. The Gorton Community Center in Lake Forest renovated its theater and renamed it after John and his late wife, Nancy, in 2015.

Hughes suggested to Home Alone director Chris Columbus that they cast Culkin as Kevin McCallister after Hughes had directed the young actor in the 1989 movie Uncle Buck, according to a Q&A with Amy Wilkinson in Entertainment Weekly.

“I met a lot of kids … and I think one of the final meetings—if not the final meeting was with Macaulay,” Columbus told Wilkinson. “We read a couple of scenes together, and I called John and said, ‘He’s amazing.’ Because he’s a real kid. He doesn’t look like one of these Hollywood-perfect kids. His ear is bent a little bit. He had a great voice that was not annoying, it was charming, and he was really funny.”

Culkin carried serious, touching scenes in the movie, too. The McCallister family’s neighbor Old Man Marley (Roberts Blossom), reputed to be “The South Bend Shovel Slayer,” frightened Kevin until the pair shared a pew and conversed during a Christmas choir performance. Marley, estranged from his son at the time, was there to hear his granddaughter sing. Two churches—Trinity United Methodist in Wilmette and a church in Oak Park—were used for the exteriors and the interiors of the scene, respectively.

“You should call your son,” a thoughtful Kevin told a distraught Marley after learning arguments between Marley and his son had created tension. Marley then revealed, “I’m not welcome with my son.”

Christmas Day arrived. Kevin woke up at home, hopeful that a family member—any family member— would be there to greet him with a house-rattling “Merry Christmas!” The fair-haired boy discovered he was still alone.

But Kevin escaped its clutches when he heard the front door open and recognized the most wonderful sound in the world: his mother’s voice. Kate McCallister (Catherine O’Hara) and Kevin embraced silently for what had to be the warmest hug in Kevin’s life.

At night, from a safe spot near a home window inside, Kevin watched Old Man Marley turn into Joyous Man Marley, surrounded by loved ones, along Marley’s shoveled driveway. The elderly neighbor had taken the advice of a grade-school student, and that paved the way to forgiveness and reconciliation with his son.

While hugging his granddaughter, Marley caught Kevin observing him from the window, with the John Williams-composed track “Somewhere in My Memory” lilting. Marley and Kevin exchanged smiles and waves.