This year, with the COVID-19 pandemic looming, the board had to think out of the box.

“We didn’t necessarily have a blueprint to follow based on what we do in a typical year. We usually just copy from previous years, but this year was completely different, and we were just thrown a curveball,” says Katia Chiampas, one of four Presidents on the Leadership Council for the Bridges Junior Board on the North Shore and a senior at Loyola Academy. “We were definitely able to get creative, coming up with some virtual opportunities.”

While the board normally puts all of its efforts into an annual Dance-A-Thon, this year it launched a number of virtual events to raise additional funds— including a yoga class and a baking class with Lettuce Entertain You chefs. And despite limitations brought on by the pandemic, the Dance-A-Thon went ahead on December 5, although it looked a bit different.

The Dance-A-Thon was held in the Gillson Beach parking lot in Wilmette, with more than 60 carloads of people (184 individuals total) participating. Cars were kept at a safe distance as dancers stepped out to boogie. People could also participate virtually via Zoom.

“We definitely needed to make sure we offered a virtual option for people as well, and it ended up working so seamlessly,” Chiampas says. 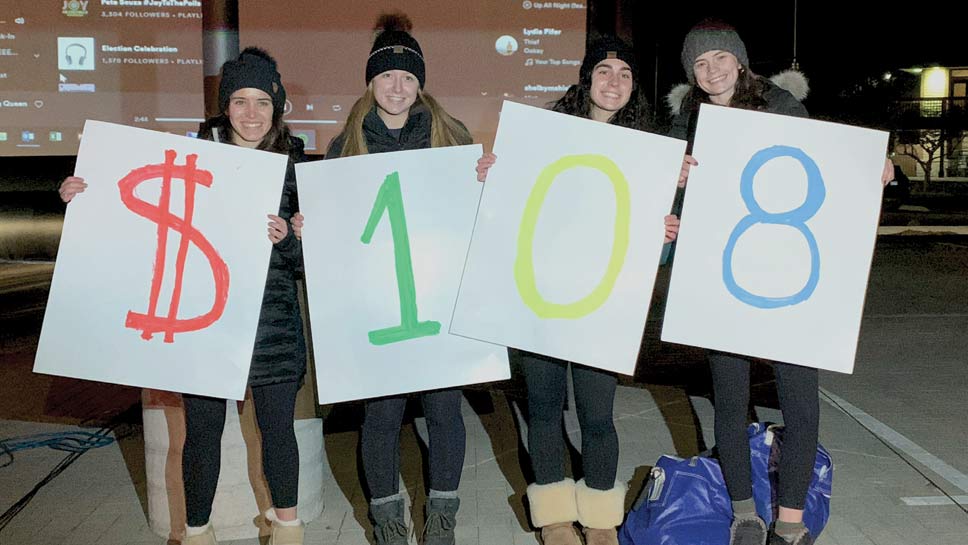 Bridges chapters exist throughout the country to put on Dance-A-Thons to raise funds for a national network of children’s hospitals. Most chapters are run by individual schools and colleges, but the Bridges board on the North Shore is spearheaded by Chiampas and Annmarie Collins of Loyola Academy and Makayla Meers and Grace Wolfe of New Trier Township High School.

In total, Chiampas and her colleagues on the Bridges board raised more than $112,000 so far this year, a national record.

Hanson has been impressed with the work the Bridges Junior Board on the North Shore and its commitment to the hospital.

“What motivates me to keep getting up for work every day is these students I get to work with on all these boards; they’re so innovative and so resilient,” Hanson says. “They’re constantly thinking outside of the box and they’re doing it for pure passion.”

“There’s a lot of negative criticism towards people and students our age, but I think if you really dig deep, there are lots of special people who are motivated in special ways,” Chiampas says. “A lot of people collaborated to put on the Dance-A-Thon this year and it’s something I’ll hold dear in my heart and will never forget.”