A mere “hello” from Peter Brown to family members, to churchgoers, to neighbors, or to strangers would never do.

The friendly 5-year-old son of Grace Presbyterian Church Senior Pastor Marshall Brown and his wife, Allison, has always preferred to belt out a hearty “HELLO!” to anyone within earshot.

“He’s the light of our life,” Marshall Brown, the staff leader at the Winnetka church since 2014, says with a hint of the Southern accent he developed in his native Dallas. “What a joy, what a buddy. Peter’s smart and verbal and engaging, no matter where he is.

“I love,” the 47-year-old adds, “how assertive the little dude is around people.”

’Tis the season to be talkative and expressive, especially for Christians who don’t want the true meaning of Christmas to get lost in the avalanches of holiday gifts and decorations and amid the pall of the pandemic.

“God gave us the gift of his Son to heal us and to show his love for us,” Brown says. “‘God has come near’ was the message. God was no longer far off. It’s beautiful, the way it reads in the King James Bible.”

John 3:16, the King James Bible Version: “For God so loved the world that he gave his only begotten Son, that whosoever believeth in him should not perish, but have everlasting life.”

Brown preached the meaning of Christmas to his parishioners on December 13, reciting lines and recounting scenes from the 1965 animated television special A Charlie Brown Christmas.

“Charlie,” he begins, “was distressed, in part because of the commercialization of Christmas. He was also depressed, moping around, after Lucy had suggested he direct the local play and he picked out what was considered a terrible tree to others.

“Linus,” Marshall Brown continues, “later cheered Charlie Brown up by reading Luke 2 (the annunciation to the shepherds, in which angels tell shepherds about the birth of Jesus) and saying, ‘That’s the meaning of Christmas, Charlie Brown.’ I loved the carol ‘Hark!

The Herald Angels Sing’ that all the kids sang after they had dressed up Charlie’s tree.”

At Lake Highlands High School in Dallas, Marshall Brown suited up as a 6-foot-3 small forward for the basketball program and, as a senior, got elected student body vice president.

“I was a reserve player for the basketball team,” recalls Brown, now an avid, 11-12 handicap golfer who’d like to borrow his wife’s smooth, natural swing for at least every other round. “I was not a star; I was outclassed by most of my teammates. I was just happy to be on the team.”

Brown then netted a history degree at Vanderbilt University and later dabbled in the finance industry—the field in which his father, Marshall “Buster” Brown Jr., had entered after college. The son spent one year with an investment company, before landing a job with several titles at Covenant Day School in Matthews, North Carolina. He taught history, coached basketball and baseball, and fulfilled chapel duties for two years at the private Christian school.

“When the principal evaluated me, he told me, ‘You’re an OK teacher,’” Brown recounts. “But he was much more encouraging when he discussed my role in the chapel, telling me, ‘ You come alive and connect well with the s t u d e n t s when you’re in that setting.’ He added that I needed to preach , needed to preach the Gospel.”

Brown, in his mid-20s, earned his Master of Divinity degree at Reformed Theological Seminary in Jackson, Mississippi, and served as the campus minister at the University of Alabama from 2002 to 2008. 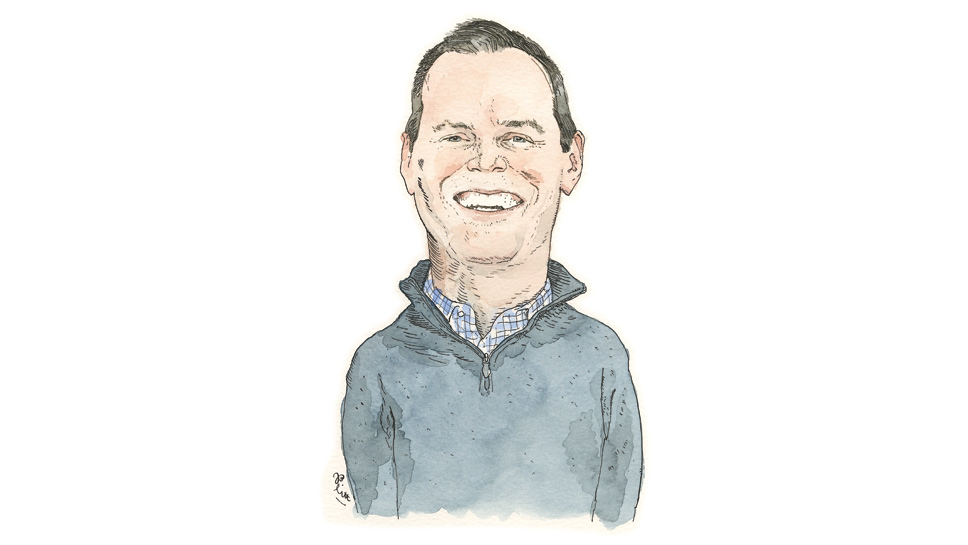 “I’ll always be thankful for having worked in the business and education worlds before heading to seminary,” Brown says. “I’ll never forget the day my parents (Buster and Anne) dropped me off at seminary, right near I-55 in Mississippi. I was upset, quite fearful, because it had hit me that I was about to start down a new path. But I found resolve, realizing there’d be no turning back.

“The fire in the belly, I felt it,” he adds. “I felt compelled to tell of God’s love and grace. There’s great humility, in receiving the call to serve a congregation. I’m not a doer as a pastor; I’m a conveyor of God’s words, telling the Good News.”

Brown answered the call to spread the word and to guide a flock at a large Los Angeles parish, where he met his future wife, Allison, who served as a volunteer at the church and was a lifelong Californian.

Marshall and Allison had been married for only a little more than five months when they moved to Winnetka in the spring of 2014. They live less than a mile from Grace Presbyterian Church.

“Warmth of the people—that’s what I first think of when I think of Grace Presbyterian,” says Brown, who has lived in eight states and three time zones in less than a half century. “I’ve heard others say that about our church; there’s a lot of love here. I find the entire North Shore fascinating; you’re not going to find many other areas in the country like this. They’re beautiful villages, not suburbs, and each is filled with interesting people doing interesting things vocationally.

“And you have an iconic high school like New Trier, plus there’s Northwestern University in our back yard. That drew me, knowing we’d be so close to a leading research university, along with the opportunities to welcome NU’s faculty and students at our church. How fortunate are we? We’re surrounded by business leaders and thought leaders along the North Shore.”

Brown’s attention returns to Christmas. Americans haven’t celebrated the religious holiday during a pandemic since 1919, right in the middle of the Spanish flu, also known as the 1918 flu pandemic (1918-1920).

“We’ll still be dealing with the pandemic on the day after Christmas,” Brown says. “Political divisions in our country won’t suddenly go away then. Nor will economic stress. But we’ll have something we’ll always have—hope.”

Hope. The feeling is a subject in “O Holy Night,” one of Brown’s favorite Christmas carols. It’s a timeless hymn.

“I love the lyrics in it,” Brown says. “There’s that beautiful part that begins, ‘A thrill of hope the weary world rejoices, for yonder breaks a new and glorious morn.’

Grace Presbyterian Church is located at 440 Ridge Avenue in Winnetka. For more information and to register to attend in-person worship services, call 847- 920-9517 or visit gracenorthshore.org