Before he became a first-time coffeehouse owner in Wilmette 15 years ago, Blair Cooke was a writer. He served a publication as its classical music critic, and his story about Chicago Bears great Walter Payton’s diagnosis of a rare liver disease ran on the front page of the River North News.

Cooke also tackled assignments for the late City News Bureau of Chicago, a cooperative news agency founded in 1890 and also known as the City Press. One assignment involved a shooting on the West Side. It also was his final report for a bureau that had hired Kurt Vonnegut in the 1940s.

“You’re not going to believe who the nurse tending to the shooting victim was,” Cooke says.

Cooke had first met Julie along a Lake Michigan beach, where she’d been collecting shards of washed-ashore glass for a jeweler when Blair and Julie were Rogers Park residents.

“The night after I covered the shooting and she took care of the victim, we went on our first date,” Cooke says.

And then Blair and Julie got married in 2002. They’re also wedded as co-owner to Alchemy Coffeehouse & Roastery in Wilmette. Housed on Linden Avenue in a space previously used by a nail salon, the business—known for its whole bean or ground-to-order coffee, as well as its otherworldly scone wheels (dough)—had to pivot from a cashonly, mom-and-pop venture to an online store offering contactless delivery of coffee beans and take ‘n’ bake scone wheels because of the pandemic. Alchemy, the cozy, friendly venue, remains open Friday through Sunday. 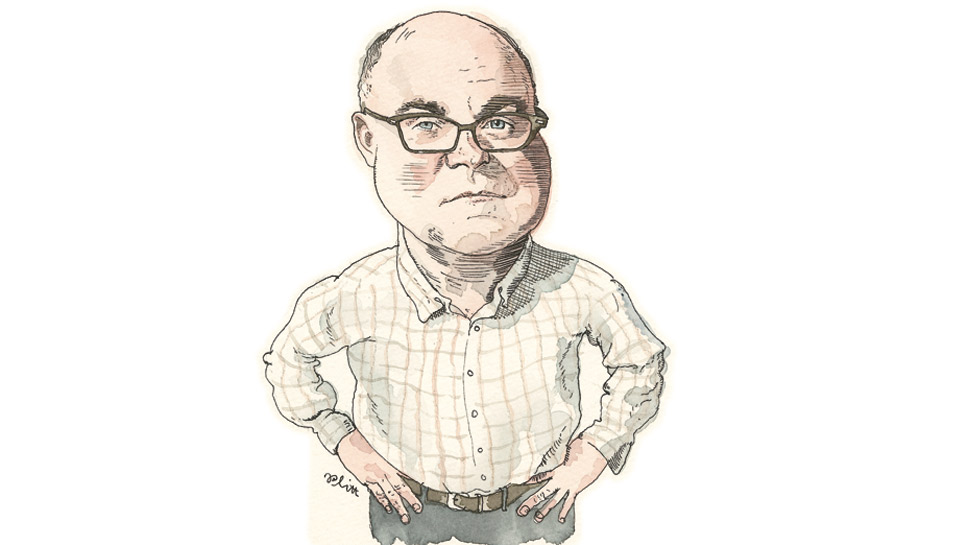 “We shut Alchemy down completely for two weeks at the beginning of COVID-19,” Blair Cooke says. “For two weeks I slept 12 to 13 hours every day. It was awesome. But it got to the point where I said, ‘OK, now what should we do?’ I can’t tell you how grateful we’ve been for the support we’ve received from the people in Wilmette throughout this tough time. They’re the coolest people on earth. There’s a lot of love here. Nobody’s greedy; nobody’s pretentious. How can you be pretentious when you grow food in your back yard like so many in Wilmette do?

“It’s like Mayberry around here, with lots of Opie Taylors running around,” adds the Glenview resident. “The kids in Wilmette are so well-mannered and polite.”

As the son of Bennett and Bernice Cooke, Blair grew up in Northbrook and listened to classical music more than any other genre from ages 9 to 13. His father, a native of Glencoe, attended New Trier High School, later traded commodities, and had a knack for transforming ho-hum parties into raucous gatherings with his inimitable joke telling and storytelling. Blair’s mother was into theater and jewelry-making, played the piano and ukulele, danced, and performed as a figure skater.

“I ate it up … ate up anything that had to do with the arts, thanks to my mother,” recalls Cooke, a 1984 Glenbrook North High School graduate who majored in theater at Southern Illinois University-Carbondale before transferring to DePaul University and earning a degree in business. “My plan in ’86, after having saved up enough money, was to become an actor in Los Angeles, but I lasted only six months in California; I didn’t enjoy my time there. I discovered that a bunch of lost people live there. I met the wrong people.

While running highly successful painting and gutter companies on the North Shore, Cooke jotted down his personal expenses one day and found out he was spending $60 per month on coffee. The figure jolted him. Shrinking that number became a quest. He then headed to a used bookstore and purchased a How to Roast Coffee book that was considerably smaller than a coffee-table book.

Cooke’s first pot of coffee at home more than met his standards. His mind started to race from there, producing idea “light bulbs” above his head. He was 38.

“I was looking for something else to do, careerwise, when I saw that a space had opened in Wilmette,” Cooke says. “I looked at it and immediately thought, ‘Perfect.’ The available space on Linden Avenue looked like an ideal location for a coffeehouse and a bakery.”

Cooke was 39 when he and Julie welcomed their first Alchemy Coffeehouse and Roastery customer on June 13, 2005.

“Our first 10 years were incredibly difficult, including all the steps we had to take—like the numerous hearings and inspections—before opening,” says Cooke, the father of two sons. “Long hours. It took a lot of energy. But it was all worth it. There’s nothing better than seeing the chance meeting of old friends, smiling and hugging, just outside our store’s door. I also enjoy seeing a line of customers outside our door, especially on a beautiful fall day.”

There’s a fun story behind how an Alchemy scone wheel reached you-have-to-taste-this status every winter, spring, summer, and fall. One of the co-owners—“you’ll have to guess who,” the shop’s website states breezily—made an honest mistake, grabbing an incorrect measuring cup while attempting to carefully follow a baking recipe.

“It turned out to be a good mistake for our business, but I’m not going to get too specific,” Blair Cooke says. “I will tell you that the whipping cream we use for our scones is really good, really expensive, and really heavy. It’s totally magnificent. Our scones are pie-flake crispy on the outside and pillow-soft on the inside.”