Chris Gould’s father, Alan, posed a question to his son more than three years ago:

“I’d like you to join me on a vacation,” the father replied.

The son immediately thought about packing swim trunks and sunblock and sandals—until his father got specific.

“He got me,” recalls Chris Gould, now 49 and in his 10th year as chief innovation and sustainability officer at the energy company Exelon, headquartered in Chicago.

En route to the ice-covered continent, the Goulds—Chris’ older brother, Bruce, also got invited—enjoyed time in South America, one of only two continents Chris Gould hadn’t visited in his life. He’d never been to Antarctica, either, so setting foot there and eyeballing an iceberg the size of Aruba would give him the distinction of having toured all seven continents at least once.

“To mark the occasion, I took a polar plunge off a cruise ship,” recounts Gould, who lives in Wilmette with his wife, Yana, and their three children (New Trier High School junior Zachary; Maya, 11; and Ady, 7). “February down there is summertime, with temperatures in the 30s, maybe low 40s. It was windy the day I dove. I had a rope on me.

“And, as I plummeted, I formed my body into the shape of the number seven.”

“Most foundations give one-time grants to organizations,” says Gould, a futurist and a man fueled by curiosity. “Our awards aren’t grants; they’re investments and philanthropic in nature, and we’re getting behind ventures that go far beyond energy. We consider it a blend of philanthropy and impact investing, with an emphasis on supporting underserved communities and minority- and women-owned startups.”

More than 120 companies applied for an award in 2c2i’s first year, and the Exelon Foundation invited 28 of them to pitch events at four designated cities. Ten emerged as winners, including Chicago-based Greenprint Partners, a corporation that works with water utilities and landowners to design, build, finance, and maintain high impact green stormwater infrastructure programs that reduce water pollution and flooding.

Another Year 1 Cohort recipient was Boston based startup New Ecology, which has offices in Baltimore and Wilmington. New Ecology has developed a remote monitoring and optimization (ReMO) system to improve performance of buildings with central boilers.

On November 7, a day after Atlantic City’s 2020 2c2i pitch day—held virtually because of the pandemic—Gould delivered a presentation on global warming to a group of Northwestern University students.

Gould grew up on a farm located 90 minutes west of Pittsburgh and crossed the border to attend Catholic Central High School in Steubenville, Ohio, home of the Crusaders. “I might as well have been from Mars to most of the students who lived in Ohio,” Gould says. 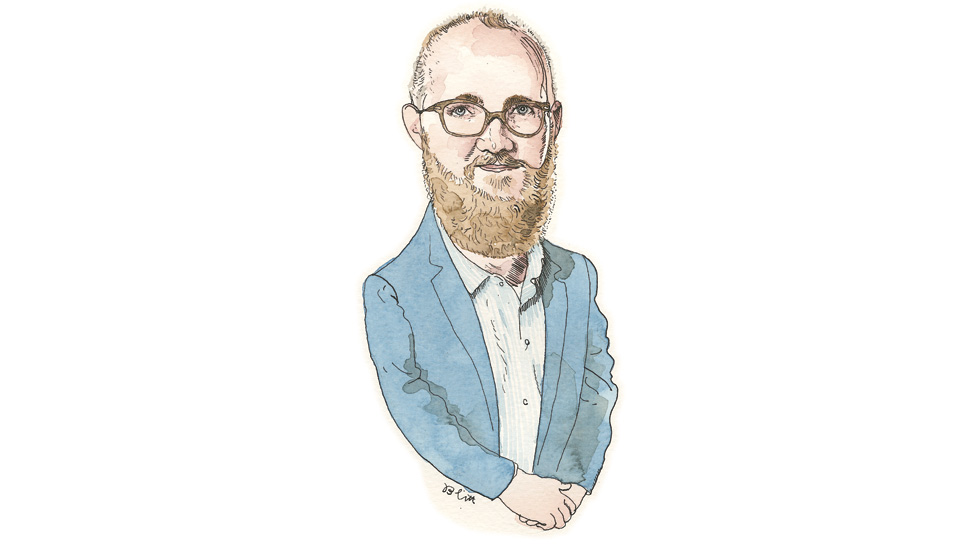 But the invader from “The Keystone State” endeared himself to his classmates, so much so that he won the election for CCHS senior class secretary by a landslide.

“My best friend told me he had nominated me to run for the position,” Gould says, adding the runner-up in the election was another good friend. “My first reaction was, ‘You did what?’ Then he assured me I’d win because I had the best campaign slogan. I asked him, ‘What’s my slogan?’”

His best friend had chosen “Go for the Gould.”

Gould didn’t take the responsibility of holding office lightly. He considered it an honor to represent his class and work closely with the school’s administration.

“My role wasn’t just to keep records as secretary,” he says. “I also looked at it as having a seat at the table and advancing important conversations.”

Gould enrolled at Penn State University and earned a degree in civil and environmental engineering. For the next five years, he worked as an environmental engineer, toiling and designing groundwater treatment plants on former U.S. Air Force bases, including one in San Bernardino, California.

“It was an exciting, great time, working outside often and building things, as well as cleaning up the water,” Gould says. “I grew up working on our farm, with my dad serving as my boss for years. That was my full-time job. My father valued hard work and patience. My mom, Florence, she was big on emphasizing education, on reminding me to be diligent in the classroom.”

The University of Pittsburgh was Gould’s next stop in academia. He collected his MBA there, adding invaluable assets to his professional arsenal through coursework at the Joseph M. Katz Graduate School of Business.

“I had started to realize it would be important to have a business side, to have a better understanding of economics and finance in order to be more impactful in my career,” Gould says. “I wanted to recognize and utilize the language of business and finance.”

Gould joined Exelon 20 years ago and has been its chief innovation and sustainability officer for a little more than 10 years. But enough about work. Anything that has to do with family heartens Gould. Daily. And, with Dad Gould working from home now more than ever, he’s never more than a handful of footsteps away from interacting with any of his three children Monday through Friday.

“Yes, they hear me when I’m working,” says Gould, who has “planted stuff ” with his offspring at Centennial Park Community Gardens in Wilmette and observed each observe and learn at one of the village’s park district plots. “I sense they’re interested in what I do for a living. So much about fatherhood is setting an example for your children. I hope they’ll all have a great impact on the world when they grow up.

“I love watching them mature.”