The anatomy of the twins’ path to lifelong relationships with their sports heroes began with the siblings’ thumbs.

Carl and Tony Ruzicka—now 71-year-old brothers, Yale University and University of Chicago Booth School of Business graduates, and retired accountants—used the digits to ring athletes’ doorbells in their hometown of Cicero and nearby Berwyn. They did it decades ago, in a bygone era when a Chicago Bear or a Chicago Blackhawk was as accessible as a friendly neighbor with a working lawnmower or a cup of sugar.

They relied on gumption, too, when they were 11 years old.

“In 1960 we saw a picture of Chicago Bears defensive tackle Bill Bishop in the local paper and read that he lived in Cicero,” recalls Carl Ruzicka, who lived in Highland Park from 1984 to 2017, before moving to the South Loop with his wife, Qian Yi. “So we looked him up in the phone book and there he was, with his address also listed. That was our first mission together as Bears fans.”

Carl and Tony got on their bikes and wheeled to the professional athlete’s house. One rang the doorbell. Bishop’s wife, Marilyn, opened the door.

The wide-eyed kids entered the house, and before they knew it, they were in the Bear’s den, flipping the pages of Bill Bishop’s scrapbook with Bill Bishop himself.

“Excitement. I remember how excited we were that day,” says Tony Ruzicka, who lives in Glencoe with his wife, Anne, and served the village as its president and as a trustee. “All we wanted was his autograph. But we ended up spending nearly an hour with him and getting to know him.

“We discovered Bill and all these other great Chicago athletes were regular people. You can be famous and a meat-and-potatoes guy at the same time.”

That story essentially kicks off the pair’s debut book, The Twins: A Journey of a Lifetime, published in September. They also formed a tight bond with genial Blackhawks forward Chico Maki (a Hawk from 1960 to1976), interacting with him and his wife in the couple’s attic, and they even battled in touch football games with Hall of Fame centerman Phil Esposito, who played for the Blackhawks from 1963 to 1967.

“The good ol’ days—we tried to capture those simpler times to let readers know what it was like back then,” Carl notes. “We were fortunate to have grown up when we did. For the book, we settled on the concept of a journey and how everything fell into place for us. Countless friends had suggested we write such a book. Those friends would hear us tell a story about a Chicago athlete to a group and then urge us to tell another story about this athlete or that athlete.”

Perhaps the best story in the book is about the twins’ connection to National Football League founder and former Chicago Bears coach George Halas. None other than Marilyn Bishop had suggested the twins write a letter to Halas and offer their services as the team’s clubhouse boys/ball boys for a season. 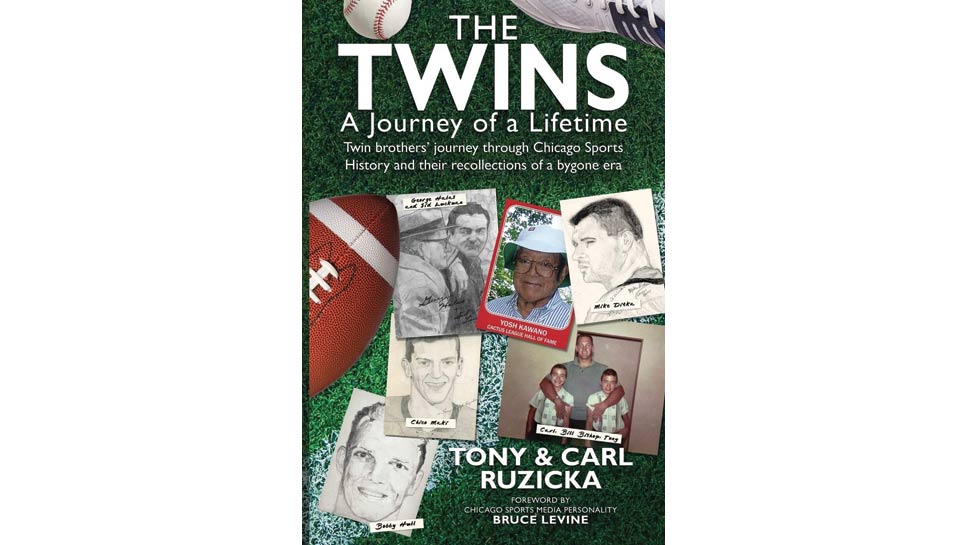 They ended up toiling joyfully for the franchise during their Morton East High School years, including the Bears’ 1963 NFL championship season.

“My job was to take care of the players on the sideline, help them with anything they needed on the bench,” Carl says. “Tony ran around with extra footballs and would often kneel (on one leg) alongside George Halas, who’d also kneel, near the field. George would use Tony’s left shoulder to help him stand up after plays.”

The twins stood together in the summer of 2005 to applaud Chicago Cubs great Ryne Sandberg at his National Baseball Hall of Fame induction in Cooperstown, New York. The former Gold Glove second baseman had fun with the 5-foot-5 brothers back then, nicknaming them “Twin Towers.” They accompanied longtime Cubs clubhouse manager Yosh Kawano to the Hall of Fame ceremony.

The twins first met Kawano in the 1960s, when they were Bears clubhouse boys at Wrigley Field, the football team’s home facility before Soldier Field, and Kawano— sporting his t r a d e m a r k white, floppy fishing hat— w a s b u s y getting the quarters ready for the baseball season.

“ We lost touch with Yosh after our high school years, but we saw him along the Wrigley Field concourse one day in the 1990s,” Tony says. “He remembered us. Wonderful, wonderful man. He knew everybody.”

“Yosh,” Carl adds, “knew Ted Williams, Stan Musial, golfer Raymond Floyd, Frank Sinatra, and so many other famous people. Such a loyal friend to many.”

Another significant theme that courses through the book is running. The twins ran distance races for track teams in high school and competed as runners at Yale, where a man named Frank Shorter also suited up for the Bulldogs’ track and field squads. Shorter was a junior at the Ivy League school when the twins matriculated in New Haven, Connecticut.

All Shorter did was win the gold medal in the men’s marathon at the 1972 Summer Olympics.

And he and the twins are still good friends.

“Developing sport skills led to simply wanting to always get better,” the 73-year-old Shorter says in the last chapter of the twins’ book. “Eventually, in what I would term a ‘Ruzicka Twins Direct Response,’ they tracked down their sports heroes, walking up to them to introduce themselves and then ask questions.

“Being twins,” adds the 1969 NCAA national champion in the six-mile run, “got them in the door, but it was their combined talent that always seemed to allow them to stay there and never be shown out.”

The Ruzickas’ book, The Twins: A Journey of a Lifetime, is available on amazon.com and barnesandnoble.com. Visit ruzickatwins.com for more information.