As supergroups go, it’s hard to imagine one cooler or better suited for that title than the Chicago quintet known as The Flat Five. Consisting of longtime Evanston resident Nora O’Connor, along with Kelly Hogan, Scott Ligon, Alex Hall and Casey McDonough, The Flat Five effortlessly conjures a sense of nostalgia in the listener, even if you’re too young to remember.

That’s due to the band’s songwriter Chris Ligon, whose imaginative wordplay is the vehicle by which we are transported on the albums It’s A World Full of Love  (2016) and the band’s new full-length record Another World (Pravda Records). Harmonizing throughout, O’Connor shares the lead vocals with Hogan on the irresistible opener “Drip-A-Drop,” as well as “Butterflies Don’t Bite,” and takes the lead on “This’ll Be the Day” and “House of Foam.” O’Connor spoke to us a few weeks ago in advance of Another World’s release this month. 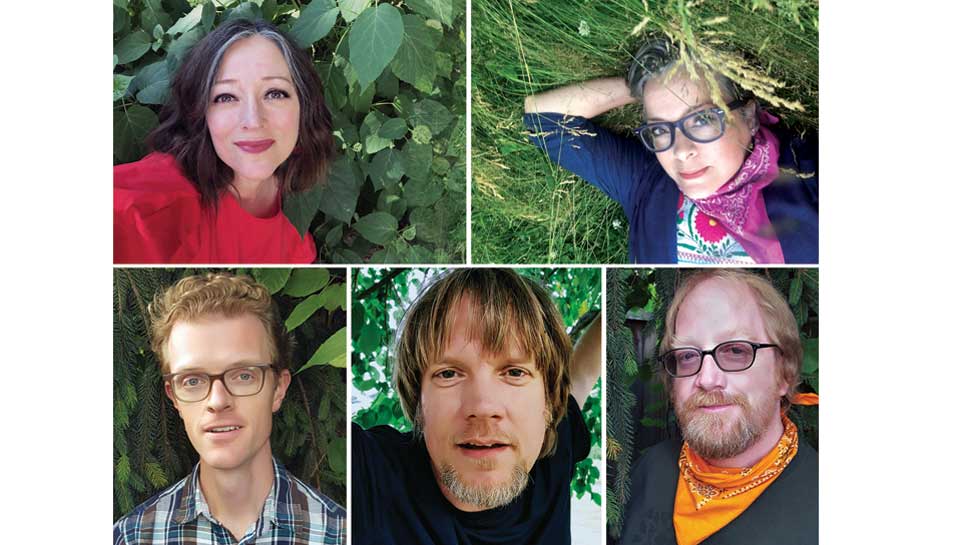 In addition to you, the other members of The Flat Five have connections to Chicago’s legendary alternative country scene. Do you see it as a natural progression, the way that The Flat Five’s self-described “twisted sunshine vocal pop” grew out of alt-country?

I’m going to say yes. I also think just because we are more than country. We all have pop roots as well. Maybe Kelly and I were leaning into our country roots. For me, growing up with Irish immigrants, I have a lot of Irish Celtic music background and then started in the bluegrass scene in southern Illinois. So, Kelly and I were leaning into the country music, but we still had all this pop music living inside us. As the band was forming and as we started to pick our song set and find our sound, we leaned into the twisted sunshine pop. We’re made up of more than flavor.

Two of the best examples of The Flat Five’s “twisted sunshine vocal pop” are “Drip A Drop” from the new album Another World and “Buglight” from 2016’s It’s A World of Love and Hope. Are they as much fun to sing as they sound?

Yes! We all got to the studio and Scott said, “How about this song ‘Buglight’? Let’s just do it in this style where I play guitar and we all gather around one microphone.” We recorded it in just a couple hours after a couple takes. “Buglight” just happened really organically and really fast. (Regarding) “Drip A Drop,” Scott sent us an email the night before we were going to the studio (that said), “Chris has a bunch of new songs. Check this one out.” I feel like we’ve been together so long that we each know our place and fall into our positions quite quickly.

“Look at the Birdy” from Another World is a wicked funny recounting of a Sears Portrait Studio experience from the perspective of the photographer. Being the mother of young ones, did you have any amusing episodes at the Sears Portrait Studio, or do you have one you’d care to share from your childhood?

I guess I’m not a very good mom because we’ve never done portraits. But we always went to the Lincolnwood Town Center on McCormick and Touhy. We never thought we could afford to take professional pictures, but we always took the boys to see Santa Claus (for a photo). There was nice Santa, creepy Santa, maybe drunk Santa. Some of my favorite photos of my kids are the ones where one is smiling, and one is crying. It’s priceless. I’ve never been into the perfect picture, the perfect outfit and the perfect background. I kind of like the misbuttoned shirt and the crying kid next to the other kid sitting up straight and smiling.

Insects figure prominently in the Herb Alpertesque “Butterflies Don’t Bite,” as they did in the aforementioned “Buglight.” Are you an entomophobe or are you a fan of the vast insect world?

As you know, all of these songs are written by Chris Ligon. I think he’s into all sorts of stuff that he’s not ashamed to admit. He’s so playful and childlike and deep and serious. It’s interesting the way he uses bugs as imagery or as metaphors.

But how do you feel about bugs, personally?

Personally, I have no problem with bugs. I don’t kill spiders. I love the bees in my backyard all over my flowers. Bugs don’t freak me out. I can sit and watch a caterpillar walk across the floor all day long.

Chris Ligon, whom you mentioned, certainly has a way with words and melody. As a songwriter yourself, what do you find most appealing about singing Chris’ songs?

I think I just love his stories. For example, the song “Birmingham” from our first record. It kind of sets up the visual right away, where one character is shielding the other character so they can pee outside and no one else can see. Or the lines, “Remember when we went to Tennessee and I loved you and you were kissing me.” I tend to sing more about lost love and relationships. I think Chris can really put a color picture in your head and it’s always a vibrant color, and rarely black and white.

At last count, including The Flat Five, with how many musical acts are you associated?

At the moment?  It’s hard to say during a pandemic, but in a regular world I would say I’m in about five active bands, including my solo stuff. And I play bass for other people. Then there’s some bigger acts that I go on tour with.

Such as The Decemberists and Neko Case.

In the earlier days of the pandemic, you and Kelly Hogan, two Flat Five members, performed in the socially distanced all-star all-female supergroup BOTO’s (Band Of Their Own) YouTube video, singing the Pat Benatar hit “Shadows of the Night”. Is there more to come?

Maybe in the wintertime there might be. I feel like in the beginning of the pandemic we were all scrambling and panicking and mourning and just looking for ways to connect and create content. The Flat Five did “It’s Been A Delight” Hollywood Squares style. I feel like it’s kind of calmed down because people have been, maybe, getting off their computers a little. I’ve been playing outdoor concerts, backyard solo shows, all summer. But that’s winding down. I think as we are entering into hibernation or even possibly another lockdown, there might be some more of that stuff. I have been trying to ease up on my screen time. I feel like in the beginning I was watching everybody’s home concerts and videos, trying to stay connected. It got to be a little too much. As we’re going into the winter, maybe there will be more stuff like that for me.

When I interviewed you in the pre-COVID-19 year of 2017, we talked about Evanston, where you’ve lived for a dozen years, and the wonderful music venues and the supportive music community. Are there ways in which the Evanston music scene has been able continue supporting its musicians, as well as their fans?

Big time! All things considered, how everything just kind of stopped, there’s a venue in Evanston called SPACE and they’ve started these “To Go” shows. I’ve been doing a lot of those. Jason Narducy (another Evanstonian) has also been playing all over. My little town of Evanston has been really supportive. There are a lot of music fans here … a lot of people here who are parents, like me, and about my age, who love going to concerts. So many people have been open to having small socially distanced backyard shows— 10 to 15 people depending on the size, sometimes 30 people. We’ve done shows with SPACE and we’ve done fundraising shows. The money that the hosts of the SPACE “To Go” shows are paying support the artist, the venue, and the employees of the venue. It’s been a really great thing. There are maybe a dozen artists who are associated with the SPACE “To Go” shows. You can jump on the SPACE website (evanstonspace.com), pick one of the artists and there’s a tier of prices for the shows that people can pay. These Evanston moms love me. I’ve had all sorts of little backyard shows and it’s been keeping me really busy. But I think I’m about to hang it up (for now) because it’s going to get too cold to play outside. I don’t really see getting back indoors to do shows anytime soon. I think when it warms up again next spring and summer, we’ll continue to play these outdoor shows until we can get back in the venues.