As a once middle school social studies teacher, Gerry Lekas used to spend a lot of time in the library looking at books. He always thought it would be cool to walk in and find a book that he’d written.

So the Glenview resident wrote one.

Earlier this year, Black Lyon Publishing, LLC released Where the Tour Buses Don’t Go: Chicago’s Hidden Sites of the Mysterious, Macabre, Ghostly, & Glamorous. The book is a guide for those who want to learn the real stories and see the places behind ghastly crimes, haunted mysteries, the more notorious antics of the Chicago mob, and the childhood homes of celebrities who grew up in Chicago and the North Shore.

“I’ve always had a bucket list of things I wanted to accomplish and growing up, I was interested in the darker side of things—in ghosts and gangsters,” Lekas says.

His background as a teacher and experience in honing stories for 11-year-olds with short attention spans made it easier to write the book than he anticipated.

“A year-and-a-half ago I actually started to write the book and I thought it was going to be really painful,” Lekas says. “But because I had all these stories built up over the years in my mind, it was actually much easier. I knew the bare bones of the stories and completing the book was mostly stringing them together and nailing down exact addresses and exact dates.”

In the midst of writing the book, along came the COVID-19 pandemic and, with travel off the table, people began to get desperate for something to do.

“The book allows readers to plan these customized trips and see some really odd things and never have to leave the car,” Lekas says. “That was a little bit of the inspiration for the book, because if you’ve ever gone on a ghost or a gangster tour in Chicago, you see the same places over and over. What about the person who really wants something more?”

The North Shore is well represented

“On the cover of the book is a shot of a section of Sheridan Road up in Lake Forest. Around 1916, there was a death there of a young girl, a romantic problem with the boyfriend,” Lekas says. “Her name was Marion Lambert, and she died from poisoning. Her ghost is still seen on that section of Sheridan Road, and people describe seeing a girl in a white dress standing on the side of the road, her mouth horribly burned.” 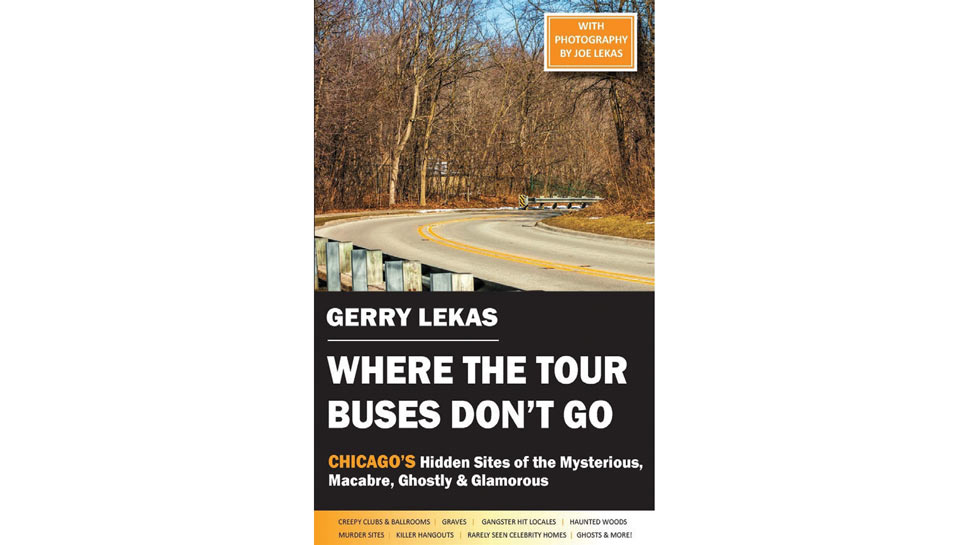 Lekas also mentions H.H. Holmes, the serial killer outlined in Erik Larson’s book, The Devil in the White City. While most of Holmes’s murders were committed on Chicago’s South Side, he maintained a home on 11th Street in Wilmette.

Then there’s notorious bank robber Baby Face Nelson, who partnered with John Dillinger on a series of notorious crimes. Nelson met his fate in Wilmette, and his body turned up in Skokie.

It’s the celebrity section, however, that might be of most interest to those on the North Shore. Many noted Hollywood actors were born or raised on the North Shore. Charlton Heston, who Lekas calls “Moses of the North Shore,” was born in Wilmette, and Ann-Margret was raised there. Robert Reed, television’s “Mr. Brady,” was a native of Highland Park. Bruce Dern (recently featured in The North Shore Weekend) grew up in Kenilworth and attended New Trier Township High School.

Especially intriguing for readers might be the old haunts of the Murray brothers, including Bill, who were raised in Wilmette. Bill honed his golf skills, which would come in handy during the filming of Caddyshack at the Winnetka Golf Club.

“There’s a little park across the avenue from where the Murray family grew up, and I might be the world’s biggest nerd, but I like going to this little park and saying, ‘All right, the Murray boys, this is where they used to play’,” Tekas says. “This is what they saw when they walked out of their house, and then you start thinking about all the roles Bill played and you think, well, this is what he did every day.”

Where the Tour Buses Don’t Go can be purchased from Amazon.com and other online retailers.