The Joffrey Ballet’s annual production of The Nutcracker, one of the Chicago area’s most beloved holiday traditions, will go on this year despite the COVID-19 pandemic.

From now through December 30, the Joffrey will present Christopher Wheeldon’s critically acclaimed adapatation of The Nutcracker at Art on theMart, the largest permanent digital art projection in the world.

Art on theMart, sponsored by the Chicago Department of Cultural Affairs, is a series of 30-minute projections on the south facade of the Merchandise Mart that can be viewed for free from the jetty section of the Chicago River and on Wacker Drive between Wells and Franklin streets.

Ashley Wheater, the Mary B. Galvin Artistic Director at the Joffrey Ballet (who was appointed a Member of the Most Excellent Order of the British Empire (MBE) by Her Majesty Queen Elizabeth II late last year), says the production is testimony to the city’s resilience. ” 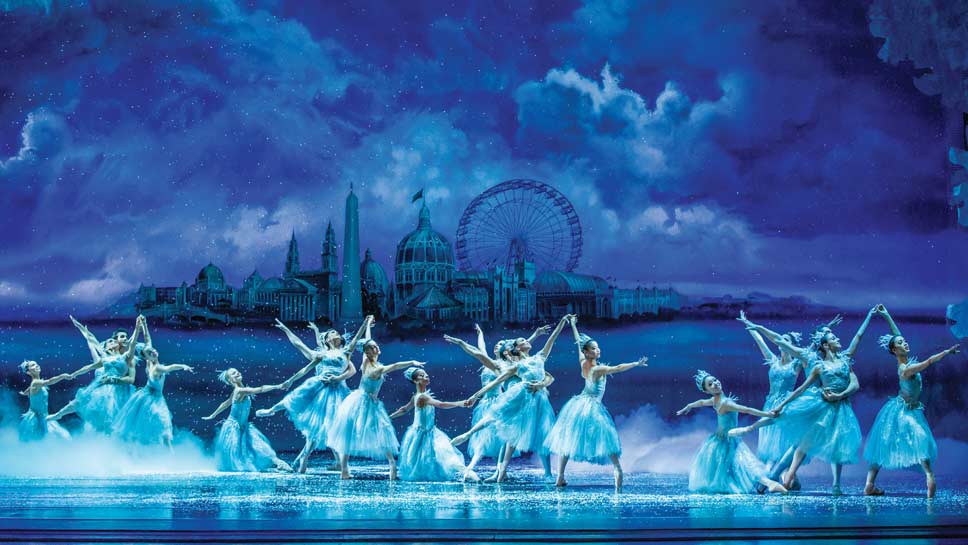 Christopher Wheeldon’s interpretation of The Nutcracker at the Joffrey Ballet tells the story of the 1889 Chicago World’s Fair. PHOTOGRAPHY BY CHERYL MANN

Art on theMart is the perfect opportunity to bring The Nutcracker to the city of Chicago,” Wheater says. “We see this presentation as a tribute to the city and as a celebration of the optimistic spirit that allowed Chicago to rise from the ashes of the Great Chicago Fire and produce the World’s Columbian Exposition 127 years ago,”

The Joffrey has been delighting Chicago audiences with The Nutcracker since its move from New York to Chicago in 1996, and launched its production of Christopher Wheeldon’s updated version—set in the 1889 Chicago World’s Fair—in 2016 to critical acclaim. While this year’s presentation is a diversion from years past, it offers an unprecedented viewing experience.

“This November, The Nutcracker was slated to debut for the first time at the exquisite Lyric Opera House of Chicago, however the COVID19 pandemic forced us to cancel those plans,” says Greg Cameron, Joffrey Ballet President and Chief Executive Officer. “Though the holiday season will look a lot different this year, we are thrilled that The Nutcracker will be presented on one of the largest public canvases in the world.” 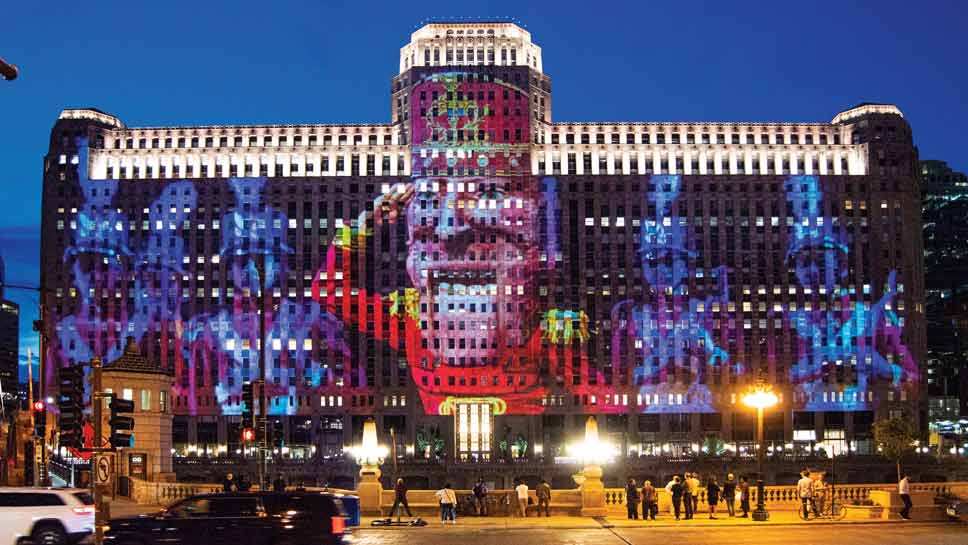 The Joffrey Ballet is projecting scenes from its phenomenal production of The Nutcracker on the side of the Merchandise Mart every evening now through December 30. PHOTOGRAPHY COURTESY OF ART ON THEMART

Like many performing arts organizations, the COVID-19 pandemic forced Joffrey to adjust its performance schedule and rehearsal and training routines.

“We had been on tour and we came back from California and those turned out to be our last performances,” says Joffrey Rehearsal Director Adam Blyde. “We had pieces of floor delivered to homes so that we could continue doing classes. That lasted through spring and summer.” 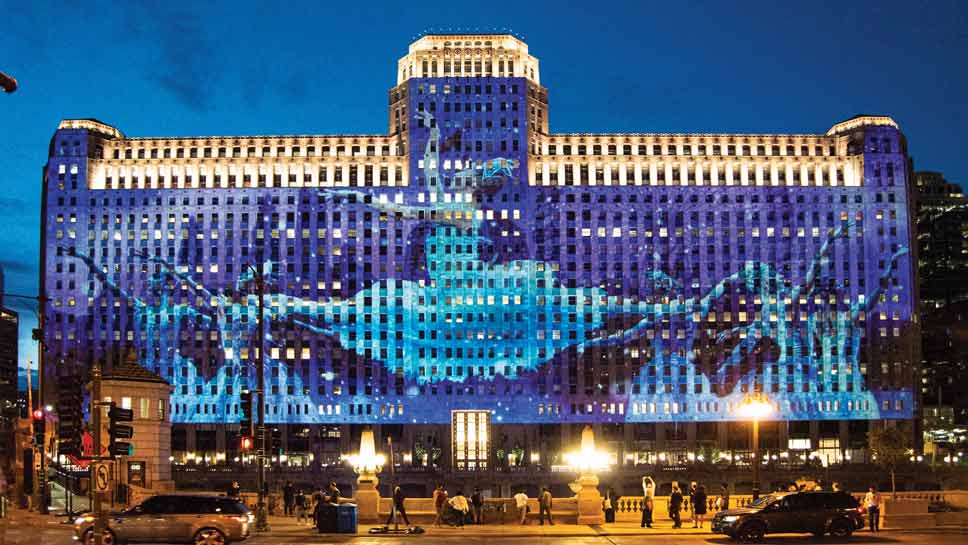 The Joffrey Ballet is projecting scenes from its phenomenal production of The Nutcracker on the side of the Merchandise Mart every evening now through December 30. PHOTOGRAPHY COURTESY OF ART ON THEMART

“A lot of our company members have done The Nutcracker every year, some since they were children, so this is a very unusual experience not to be doing it,” adds Blyde. “It’s kind of a marker for their lives and careers over the years, about the roles and how they’ve progressed. It’s strange to be without it.”

But the show must go on.

While there are no live performers, the Art on the Mart production of The Nutcracker uses a series of animated photos taken from previous Joffrey shows. The presentation follows young Marie as she embarks on a magical Christmas Eve journey through the iconic 1893 Chicago World’s Fair. The program also features paintings from the Art Institute of Chicago, as well as Arts of Life’s City Circle Heart, presenting works from artists with intellectual and developmental disabilities.

Blyde says that while nothing can fully replace the live performance, this out-of-the-ordinary season offers opportunities to provide additional experiences for those who need their Nutcracker fix. Throughout the month of December, viewers can stream the PBS documentary Making a New American Nutcracker on Joffrey’s website. The 2017 documentary, narrated by actress Neve Campbell, reveals the inner workings of the Joffrey creative team—from rewriting the story to the making of elaborate puppets to the choreographic process.

The 2020-2021 Joffrey winter programming is supported by the Joffrey’s Board of Directors, which is chaired by Highland Park’s Anne Kaplan, who also sits on its Women’s Auxiliary Board. As a precursor to the opening of the Art on theMart presentation of The Nutcracker, the Joffrey’s Women’s Auxiliary Board held a fundraiser on November 7 titled “Pulling Back the Curtain.” The virtual event featured neverbefore-seen footage of the Joffrey’s rehearsals and costume construction, plus artist interviews about the evolution of the production since its debut in 2016.

Kaplan, Ellie Forman of Glencoe, and Luann and Dave Blowers of Lake Forest were among the sponsors of the fundraising event, which raised a total of $215,000.

This year’s edition of The Nutcracker will be different than past years, but it will certainly keep the tradition alive. Former Chicago Mayor Rahm Emanuel, an advocate and primary supporter of Joffrey’s Art on theMart, is a fan.

“The Nutcracker is arguably one the most well known stories in the world,” Emanuel says.

“What makes the Joffrey’s version so special is that it’s also the story of Chicago.”

The nightly projection of the Joffrey’s The Nutcracker runs every night at 7 and 7:30 p.m. through December 30 at Art on theMart at the Merchandise Mart. For more information, joffrey.org