Organizers of a holiday event for children with cystic fibrosis needed a volunteer to portray Santa Claus decades ago. Chicagoan Sheldon Yusim offered his time and enthusiasm and hearty laughs.

Little helpers in elfin outfits didn’t accompany him to the festive occasion, but a 9-year-old named Victoria—Yusim’s daughter—did.

“There he was, a Jewish man with a white beard and curly dark hair, wearing a Santa suit and entertaining kids who had a hereditary disease,” Dr. Victoria Hass recalls. “He brought so much joy to others that day. Afterward I asked him, ‘Why?’ My father gave me a wonderful answer, saying he had felt grateful for what he had in life. The best way for him to express that gratitude was by giving back with his time to make others happy.

“‘We are responsible to each other’—that’s the message I heard, and saw, from my father in my childhood. He wanted to make the world a happier place.”

The daughter has created merriment, along with sleigh-loads of relief and hope, for others through her tireless work as clinical director at The ARK, a nonprofit that opened as a free medical clinic in the Chicago neighborhood Albany Park in 1971. Its mission now is to help Chicago and suburban Jews who are facing adversity navigate toward self-reliance. The ARK’s professional, volunteers, and donors provide free, comprehensive services within a framework of Jewish values and laws. It opened a kosher food pantry and a free pharmacy, and it paid rent and utility bills for clients, as it expanded its outreach during the 1970s and 1980s. 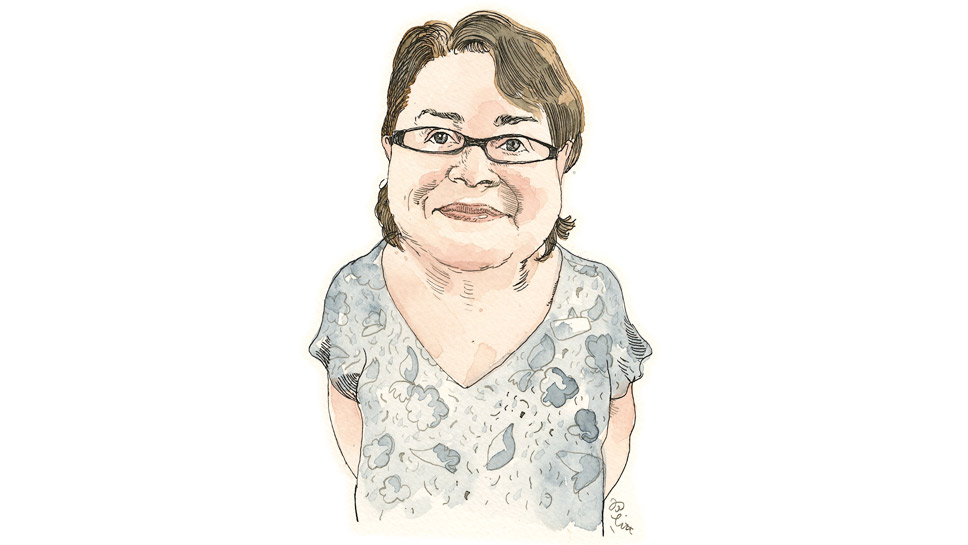 The ARK—fittingly—has a pair of offices today, one in Chicago and another (since 2011) in Northbrook.

One of the organization’s early members of the board of directors: the late Sheldon Yusim.

“It’s a vital agency,” says Hass, a Wilmette resident for 32 years and a Highland Park High School graduate. “We’re addressing the financial, physical, mental, and emotional needs of the Jewish community. Adversity can occur easily and quickly, like it did to our ARK clients during the Great Recession (2007-2009). Now here we are in a pandemic, doing what we can to help more vulnerable and intimidated clients. All of us entered a new world at the start of the pandemic in mid-March. People feared that The ARK would have to close, but we stayed open. We figured it out.

“Clients, some of them frantic, called us at end of March and in early April. When we told them we’re still open, they expressed tremendous relief. We’ve been able to deliver medication and food to our elderly and impaired clients.”

Each year The ARK cares for more than 4,000 people from all facets of the Jewish community. It draws on the shared Jewish values of c a r e , respect, empathy, and loving kindness to acknowledge each community member as an important, unique individual. Its human services honor that individuality.

As ARK’s website puts it: “One minute you’re financially secure. The next you’re not.” Frightened and anxious folks need safety nets. Hass and her ARK colleagues are dedicated to unfurling, and holding on to, such protection.

“We don’t turn anyone away,” says Hass, adding The ARK recently paid for the funeral costs of a father who died of COVID-19, donated food and hygiene products to his widow and young daughter, and provided the funds for grief counseling. “We work with volunteers, physicians, dentists, and psychotherapists. We have a great jobs program. And I have an outstanding team. I’m lucky. People ask me, ‘What’s the best part of your job?’ I tell them every time, ‘Working with my staff.’ It’s wonderful to work with those who share your values, and we all b e l i e ve clients c o m e first.”

Charity Navigator rates The ARK exceptional (four stars out of four) in how it spends donations in serving the community. The top assessment means The ARK “exceeds industry standards and outperforms most charities in its Cause.”

Yusim moved his family from the South Side of Chicago to Highland Park when Victoria was a seventh-grader. She served as a co-editor of Highland Park High School’s underground newspaper, The Subway Wall, and wrote a news story about the inequality in funding for girls athletics in her early days as a journalist. She received her master’s degree in social work at the University of Chicago and her Ph.D. in clinical psychology at Northwestern University.

Hass had worked at the Lieberman Geriatric Center in Skokie for a couple of years before starting her Ph.D. program.

“I knew, at an early age, that I’d end up working with a nonprofit,” says Hass, The ARK’s director of social services from 2008-2011. “Watching my father’s commitment to people in the community influenced me greatly. He was very poor growing up, but he lifted himself up and always did what he could to give back. He was active in synagogue, helped the Ethiopian Jews, showed up where he was needed.

She was studying at the Hebrew University of Jerusalem when she met her roommate’s brother, Skokie native Jeffrey Hass. They got married and raised two sons: Avi and Matthew. They have one grandchild.

Among Dr. Hass’s favorite pastimes is watching film documentaries. She recently enjoyed one about Indian matchmaking. Consuming ethnic fare at a new restaurant also delights her.

“I’ve always been interested in learning about other cultures,” she says. “They fascinate me.”

What fuels her and The ARK: the Jewish value of chesed.

“Loving kindness and compassion,” Hass translates. “It’s the governing principle of all interactions between people.”

For more information about The ARK, visit arkchicago.org or call 773-973-1000. The nonprofit’s two offices are located at the Seymour H. Pesky Building, 6450 North California Avenue, in Chicago; and at 3100 Dundee Road, Suite 802, in Northbrook.