As a busy mom to three young boys, Glencoe’s Nicole Gordon works hard to maintain a balance between her work as an artist and home life. It’s not always easy, but art is her meditation, her therapy.

“I don’t think I’m unlike many artists in that I have this almost compulsion inside of me to make art,” says Gordon, whose work has been shown in galleries around the country. “It fulfills something that is unexplained and it’s here for me whenever I need it.”

The result of that drive to “make art” was on display in an exhibition of her paintings and sculptural work that recently closed at the Bellevue Arts Museum outside of Seattle, Washington. Spanning three galleries on the second floor of the museum, it was a showcase of Gordon’s work over the last decade—demonstrating different periods in her evolution as an artist.

Think amusement parks and rides that mesh pop culture iconography. Think Walt Disney’s Mad Hatter teacup. Think 3D sculptural images that allow the viewer to physically enter the narrative of the artwork and interact with it— fully engaging with narratives are sometimes disorienting and irrational, in stark contrast to the logic that guides our everyday lives. Think virtual reality, on canvas. 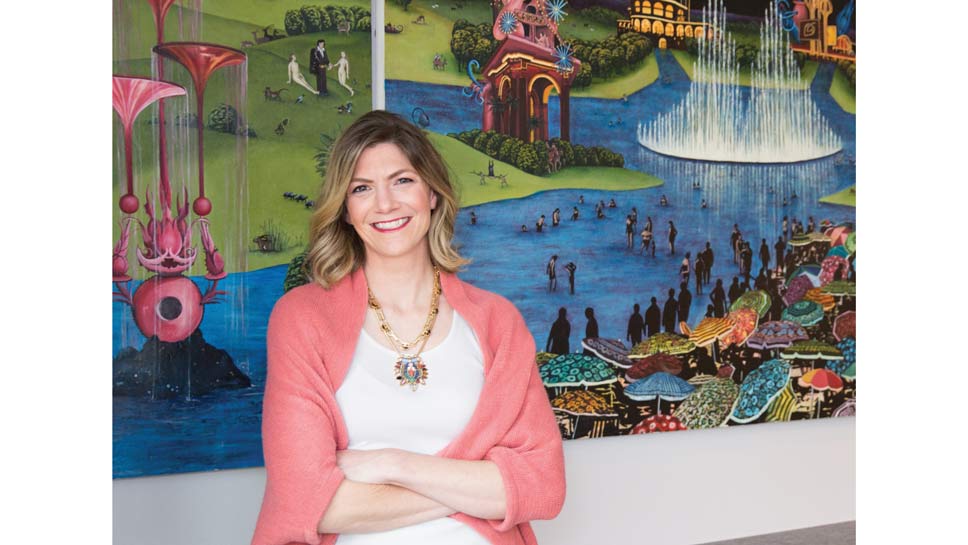 Earlier this year, Gordon became involved in a new project that portrays a different kind of reality, one that is equally disorienting but common to the millions of people around the globe who are affected by cancer. Twist Out Cancer is a nonprofit organization that produces Brushes with Cancer, a four-month program that pairs artists with “inspirations”—people who are previvors, survivors, fighters, and caregivers affected by the devastating disease.

As the inspirations share their “twist on cancer” following a cancer diagnosis, which include stories, feelings, and experiences, the artists create unique pieces of art representing their personal journey. 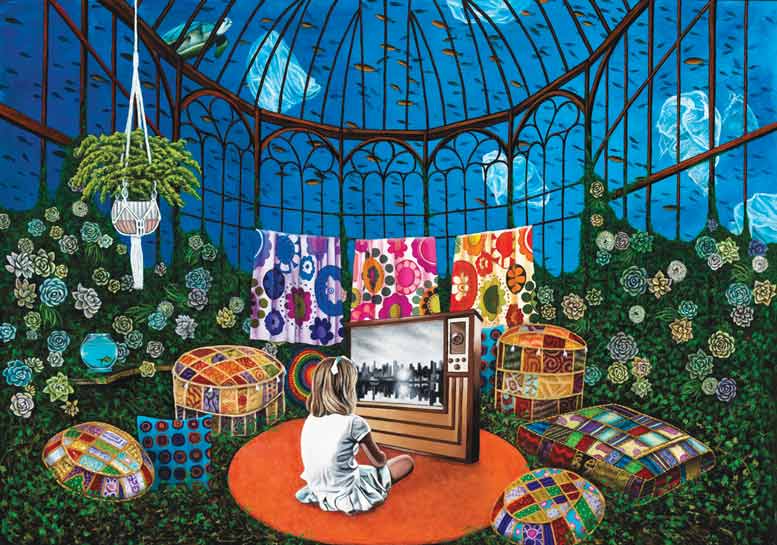 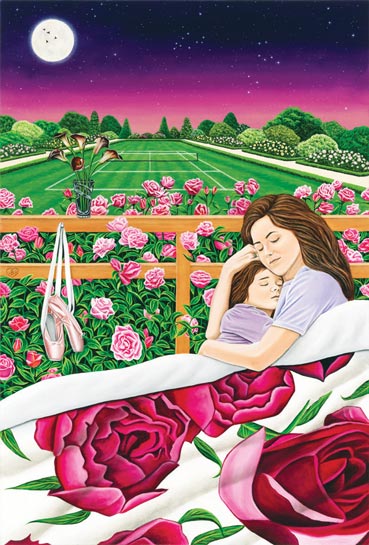 “Embace,” an oil on canvas creation, is the painting Gordon did for Lisa Glick as part of Brushes with Cancer. PHOTOGRAPHY BY TOM VAN EYNDE 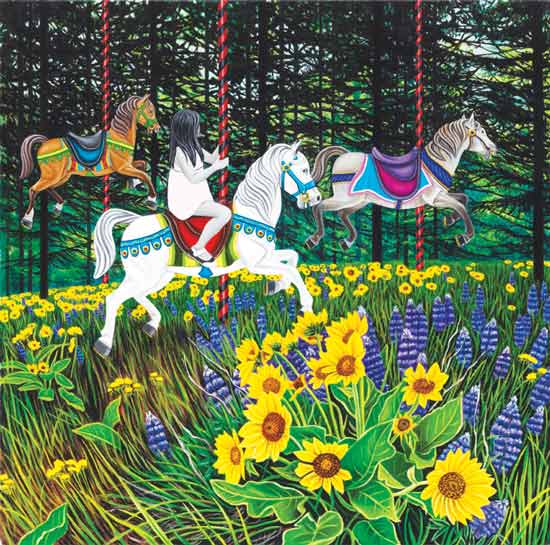 “Half Hours on Earth” is a Gordon piece that is oil on canvas. PHOTOGRAPHY BY TOM VAN EYNDE

Program mentors matched Gordon with Lisa Glick, who was the primary caregiver for her mother in the final stages of ovarian cancer.

“It’s been a truly moving experience to translate someone’s personal and often emotional journey into a work of art,” says Gordon. “After many conversations, I learned so much about Lisa and her beautiful relationship with her mother and her family.”

Glick spent four months sharing the emotional, often touching, story of caring for her dying mother—an experience she described as one of the most rewarding of her life. The central narrative of the painting revolves around a story Glick shared about a memorable trip that she and her mother took weeks before her mother’s health began to decline.

“Lisa described a tender moment on this trip when she curled up with her mother in bed like she did as a child,” explains Gordon. “The image of a mother and child as the centerpiece to this painting capture the feelings of love, connectedness, and joy.”

This unique artwork, along with artwork from 28 inspirations and 27 artists, will be showcased at a virtual event on Saturday, November 14, which will include access to a virtual 3D art exhibition, live entertainment, and a TwistKit delivered to a ticket holder’s home to enhance their evening.

On Friday, November 6, a virtual gallery will be released to the public on the Twist Out Cancer website. This will include 3D replicas of the artwork along with videos that will provide the audience with a closer look at the pieces and the stories that inspired them. The art will also be open for bidding, which will end at the conclusion of the virtual event. Proceeds from art sales will be reinvested into Brushes with Cancer, with the hope of bringing the program to more people around the world.

Gordon’s piece will be among them, and just the latest work she is putting into the world to make her viewers think, feel, and act. Because as she explains, like everything else in life, there is always something more than meets the eye.

Even Gordon’s signature teacup, an element that repeats throughout her work, is a sign of conflicting emotions, and how we process them.

“The spinning teacup ride is simultaneously joyful and terrifying, not unlike the experience of looking inwardly and relying on ourselves for a deeper connection to the world around us,” she explains.

Some of her other recent work references art history, with a nod to female Surrealist artists from the past.

“I started to research lesser known female Surrealist painters and sculptors and reference some of their imagery to create a connection between the past and the present,” she says.

A standout was Dorothea Tanning, an artist who made a name for herself for many decades throughout the 20th century, dying at the age of 101 in 2012.

“I was a huge fan of Tanning’s in college and found myself recently reexamining her work,” says Gordon. “Tanning said, ‘Keep your eye on your inner world.’ That really is what this whole new body of work is about for me—finding inspiration from within.”

For more information about Brushes with Cancer and Twist Out Cancer, visit twistoutcancer.org/brushes. Tickets and sponsorships to the event can be purchased by visiting one.bidpal.net/brusheswithcancerchicago2020/ticketing.

To learn more about Nicole Gordon and her lifetime of work, visit nicolegordon.com.