Have tie-dye T-shirt, will travel.

To Europe. To Canada. To Maine and to California. And to states in between. Highland Park resident and public relations maven Ilyse Strongin attended hundreds of Grateful Dead concerts. Only true die-hards of the iconic rock band can say that, along with the roadies in charge of setting up the sound equipment.

“Everybody smiling, everybody happy,” Strongin says of one of the guaranteed attractions at a Grateful Dead show. “You’d never come across judgmental or materialistic or competitive people at a concert.

“And you’d always feel a strong sense of community, from start to finish,” the 54-year-old adds.

Community—it’s what emboldens Strongin and her co-founder and co-partner, Tali FarisHylen, at Highland Park- and East Lansing, Michigan-based Ripple Public Relations. Ripple was born in 2009, with the tag line, “We take the good word and make it Ripple … .”

“Ripple” happens to be the title of a 1970 Grateful Dead song. It was featured in the movie Mask, starring Cher and Eric Stoltz.

“One of the best Grateful Dead songs ever written,” Strongin insists. “I still smile every time I hear it.”

Strongin welcomes prospective Ripple clients with similar warmth, and she does dead-serious research after getting the green light to represent them.

“We love our clients and we make sure we get to know them very well,” Strongin says. “Many of our clients are municipalities, and not just those close to our Highland Park office. We also work with Long Grove and Gurnee and Wheeling, among others. We help all of our municipalities build awareness and bring their residents together. But we don’t just promote. We promote and help stage events, like festivals in Highwood, downtown Highland Park, and the Ravinia District.”

The pandemic, sadly, has put up a phalanx of stop signs to fests and most other events traditionally associated with large gatherings. But Strongin and her resilient Ripple professionals aren’t running idly at intersections in Lake and Cook counties. They’re brainstorming constantly, directing meaningful pivots for their clients (for-profit and nonprofit entities), and envisioning an outbreak of rainbows in 2021 and beyond.

Ripple has created virtual trivia tours and a drivein movie night at a makeshift site to reintroduce the world to home-tethered-since-March families. The PR firm is also listening closely to businesses and engaging community members.

“Everything’s changing, seemingly daily, because of COVID-19,” Strongin says. “We had to jump right in, as a public relations company for our clients, after it appeared. There’s fear out there, as well as angst and negativity. People, though, are thinking of others now more than ever. The not-so-well-off people are on others’ minds. I’m a forever optimist. We’re going to come out of this stronger. We’re surrounded by people with good hearts. Behind every business there is a big heart. Businesses have stories to tell. 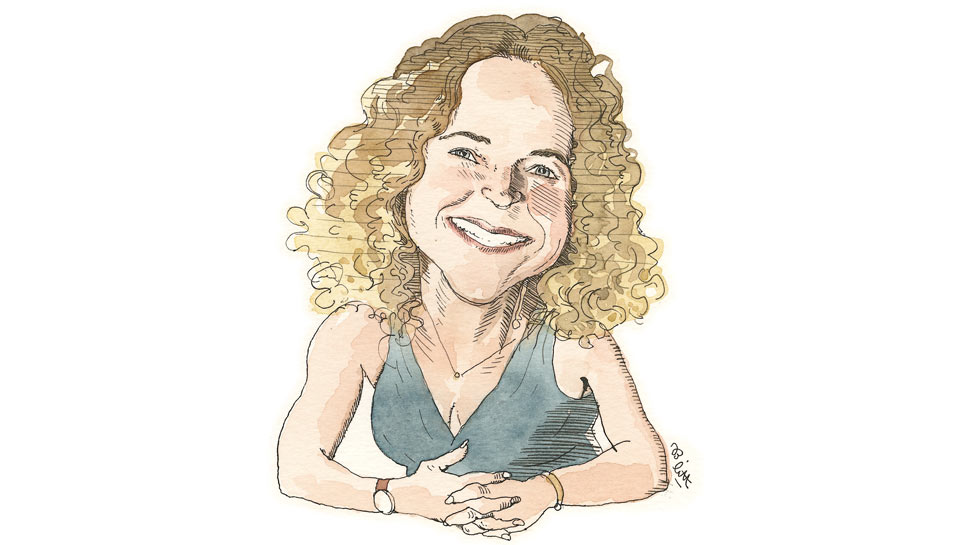 “Telling those stories,” she adds, “is what PR is all about.”

One of Strongin’s early chapters unfolded as a student at Niles North High School in Skokie. The daughter of Ray and Barbara, she participated in track, softball, tennis, and gymnastics. She didn’t win a state championship in any sport, but you couldn’t display what mattered to her—developing relationships with teammates, embracing the challenges of competition, enjoying wall-towall fun—in a trophy case.

“I did what I was supposed to do in high school,” says Strongin, who lives in the Ravinia District and still considers her baby brother, Marc, her best friend. “I got social. I got my driver’s license. I was, and still am, a ‘people person.’ I had 50 million groups of friends back then. I was a social butterfly. I was the epitome of a social networker.”

Strongin flitted her way to a degree in broadcast journalism at the University of Illinois and a Master of Print Journalism at Columbia College-Chicago. Her mother’s best friend advised a twentysomething Ilyse to explore opportunities in media relations. Strongin landed a position with S & S Public Relations in Northbrook in the late 1980s and later launched a PR department for an advertising agency. One of her first department hires was Faris-Hylen.

She also has experience as an adjunct professor of Public Relations at Carthage College in Kenosha, Wisconsin, not far from the location of her beloved lake house, home to legendary pre-pandemic bashes in the summers.

“Want to hear something exciting?” blurts the excitable-since-birth Strongin, the mother of Brandi Rae, 16, and Joie, 13, and a decades-long boater, hiker, cyclist, and kayaker. “I just learned one of my former students is an anchorwoman in Arkansas.”

Old, wonderful news: Strongin still loves her job. She gets to get the word out on fun, community-galvanizing events like Highwood’s Pumpkin Festival, Bloody Mary Fest, and Garlic Fest, and Ravinia District’s Harvest & Harmony Fest. Ripple PR celebrates every time it gets to work with Celebrate Highwood and back its mission of bettering Highwood’s community through events and festivals.

“We’re quick to give our secrets away,” Strongin says. “If another community wants to hold a Pumpkin Fest, for example, we’re more than willing to share what it takes to make that happen. We love to partner, to collaborate. I look at all of our clients as if they were my businesses. And start-ups are great; I enjoy working with them and promoting them. Some start-ups are scared and want to crawl at the beginning, but others want to stampede.”