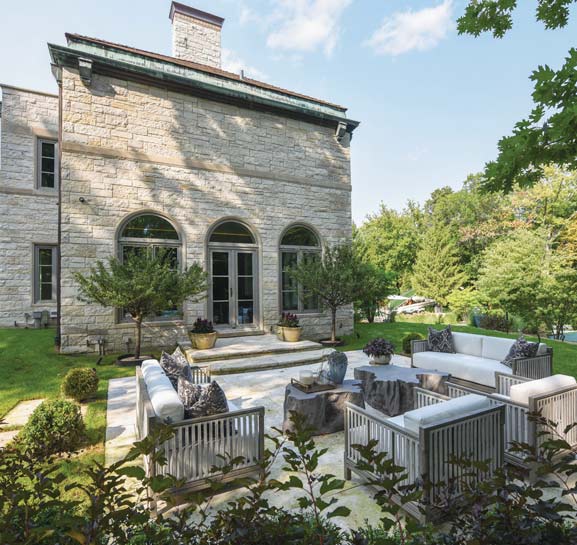 The historic Pabst Mansion at 443 Sheridan in Glencoe. PHOTOGRAPHY BY MATT MANSUETO

In early September, the iconic Mayflower Place (better known as the Schweppe Mansion) in Lake Forest sold for $5 million after spending 13 years on the market. The 28-room mansion is just one of many multimillion-dollar homes to sell in what has become nothing short of a North Shore luxury boom.

“Throughout the Chicagoland area and beyond, people are rediscovering the North Shore,” says Ann Lyon, broker for Berkshire Hathaway Home Services of Lake Forest, which has listed the Schweppe property for several years. “In Lake Forest, we have experienced buyers who are searching for space, land, and serenity—buyers who value the city’s natural beauty, dedicated open lands, historic downtown, and spectacular beachfront.” 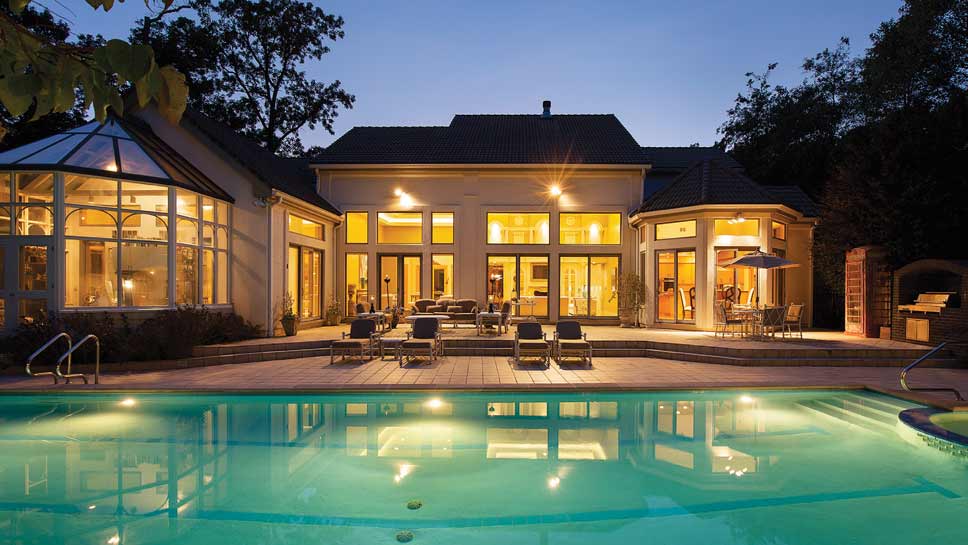 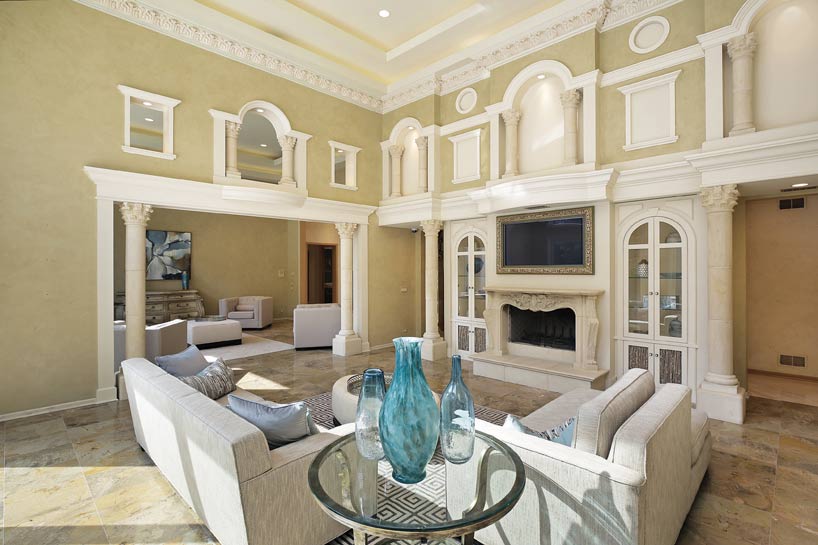 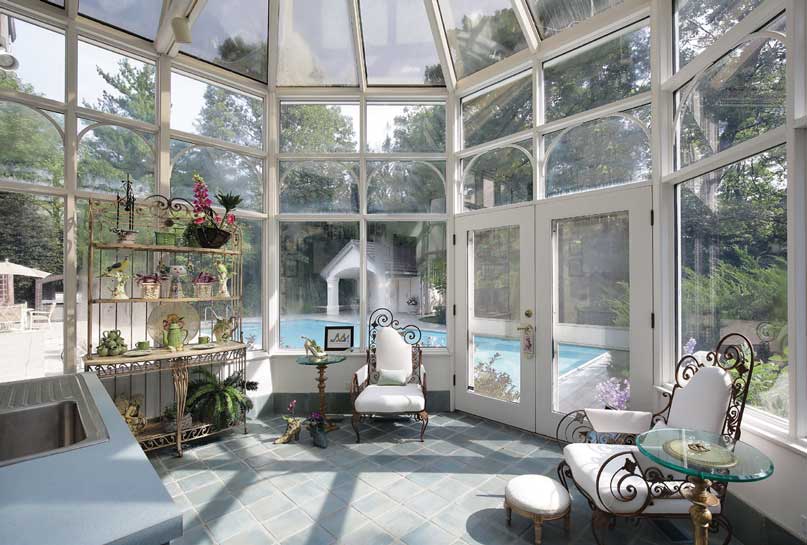 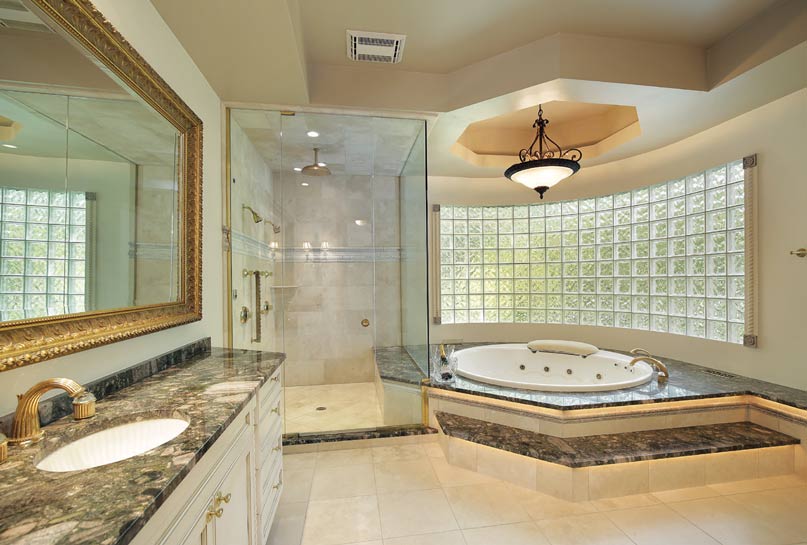 The need for larger and more comfortable living spaces, preferably with amenities that help keep the fun at home, has city dwellers flocking to the North Shore, and suburbanites looking to upsize. Large houses and estates that have been on the market for years—or have come on and off the market multiple times—are selling. The result has been a tightening of the market due to both high-demand and a decrease in new luxury listings.

But a larger confluence of factors is giving the luxury market across the North Shore renewed appeal. The desire for couples and families to exit urban areas due to COVID19 and other considerations are driving up demand in the market as a whole. The pandemic, and the uncertainty moving forward, is causing a serious rethink of what our lives are going to look like in the future.

North Shore real estate brokers say the current luxury buyers—ranging from young couples still waiting to have children to retired grandparents moving back to the community to be closer to their children or grandchildren—are being deeply mindful about their home searches and purchases knowing our world might never go back to the way it was.

“Buyers are beginning to think that our way of living really has changed and it’s going to change for a longer period of time,” says Susan Maman, a broker with @properties in Glencoe. “Some of these things we’re experiencing now may become permanent.”

Maman says luxury properties are particularly attractive at the moment because they offer space where guests can socially distance outdoors and indoors, and bedrooms are far away from each other on multiple finished floors for hosting friends and families overnight. The properties include many amenities that have become more appealing since the pandemic started.

“It’s not all young people, but I’m seeing young people who don’t have children buying these luxury homes,” Maman says. “They’re coming from the city and they’re creating a new lifestyle for them – selves.”

While the migration to the North Shore from the city might be driven by practical considerations to the pandemic, Lori Neuschel, an @properties broker based in Wilmette, sees a deeper, more reflective force at work.

“People had two-and-a-half months sitting in their houses with their families and a lot of what I would call humanistic thinking took place,” Neuschel says. “I’ve never seen such a shift in thought about lifestyle priorities that I’ve seen in the last five months. And not just a change in thought; action has taken place, too.”

The issue of space extends beyond just room to roam. For those families that do have children, or for parents working at home, they need living spaces that meet the pressing, practical needs of our current times.

“The luxury market has picked up and is very strong, particularly around $2 million,” says Louise Eichelberger, with @properties in Winnetka. “In this

environment, families want more interior space. They need it if they’re working from home, if they’ve got boomerang kids who are attending college from the base, or even grown kids living back home.” 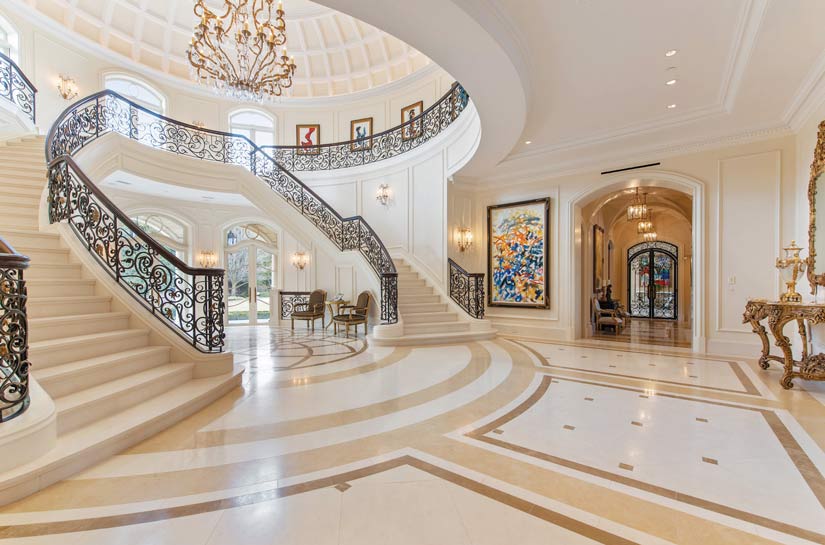 This luxury property at 68 Locust Road in Winnetka was listed by Jena Radnay of @ properties and closed in June. The home features a restaurant-quality bar, pool and spa, wine cellar, theater, and garages for nine cars.

Eichelberger adds that in addition to the need for space, proximity to the downtown areas of North Shore towns and being able to develop a sense of community is especially important during times of uncertainty. 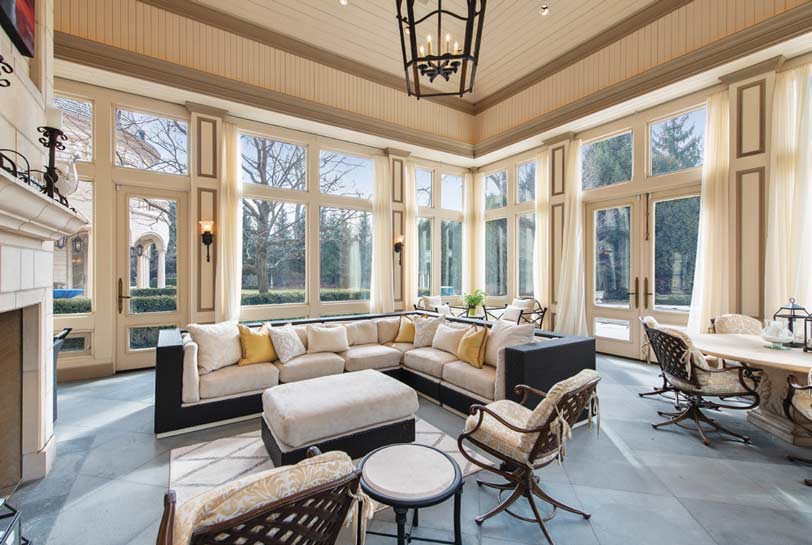 “What I find interesting is that it’s all com – munity, village, and family based,” she says. “These are the right foundations of finding the right place in the world for you to live and raise your family and see your family.” 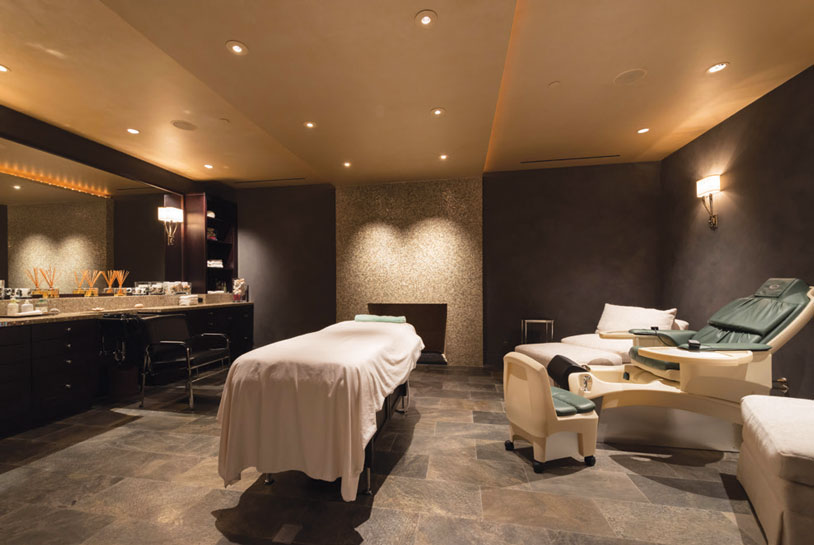 “The biggest factor today is needing amenities all under one roof,” says Ellen Chukerman, a broker with Baird and Warner in Highland Park. “Interest rates are a part of it, but having an office, a workout space, and outdoor space to entertain and be on the safer side is important.”

Scott Lackie, Designated Managing Broker with Griffith, Grant & Lackie in Lake Forest, says that whether COVID-related or not, a lot of what’s driving the current luxury market is couples and families simply deciding to speed up the decision they would have eventually made anyway.

“The people leaving urban areas are accelerating their decision to move north and making that decision a little bit sooner,” Lackie says. “There are probably four or five solid reasons why,”

One of those reasons, Lackie points out, is the ongoing favorability of interest rates, which could be motivating buyers to lock into a mortgage on a home larger than they originally planned to purchase.

“You can’t ignore the interest rate environment. It is definitely part of the equation,” Lackie says. “Somebody can buy a house this year and if they’re under the same budget constraints from year-toyear can buy $75,000 to $100,000 more house due to favorable interest rates.”

Not only is this the year buyers can get more, they can still get a good deal. While the market has tightened, prices have not increased significantly. Karen Mason, an @properties broker in Glencoe, says from a pricing standpoint, buyers can’t look at the North Shore market as a singular one.

“Inventory is definitely low, and markets are hyperlocal, so some markets have lower inventory than others,” she says. “In some markets, the demand is driving up the price a little bit and in some markets the prices are still pretty flat.” 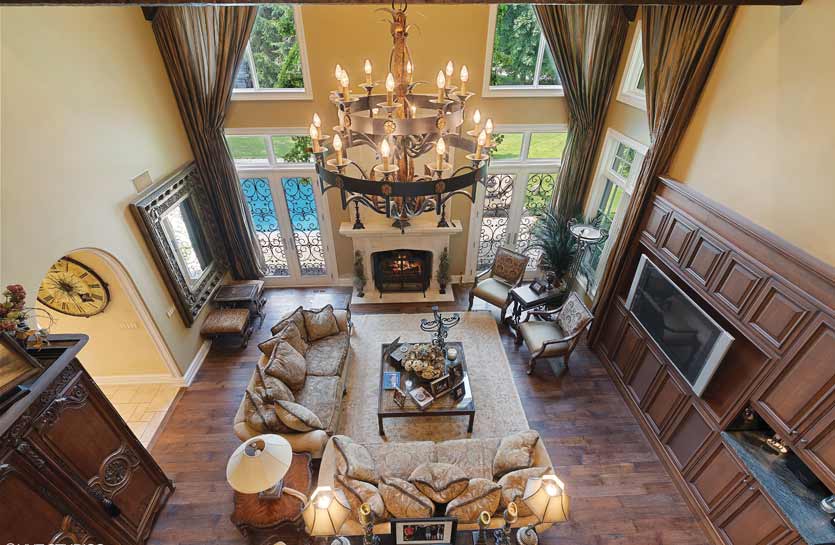 This home at 289 Prospect in Highland Park was recently listed by Ted Pickus of @properties. Featuring a home theater and full-sized basketball court, it’s just one of many sought after properties in a hot luxury market on the North Shore. 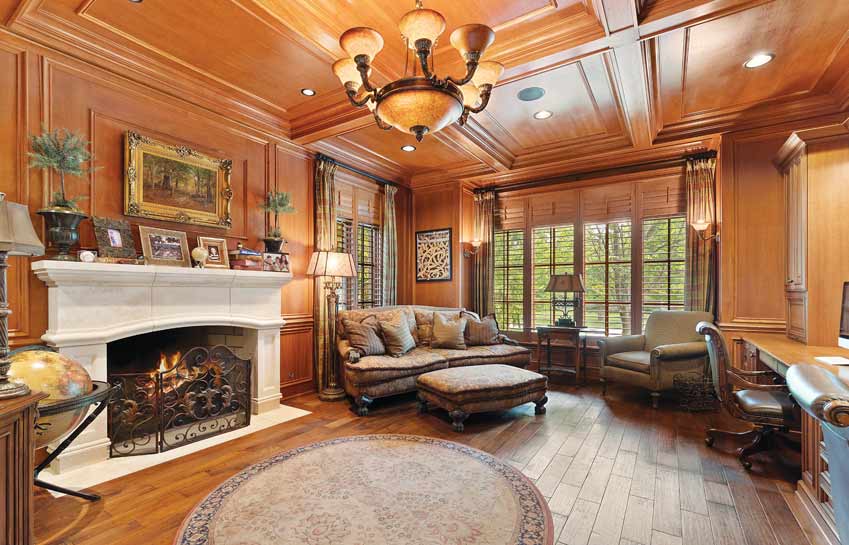 Jena Radnay, broker with @properties in Winnetka, also says it’s important to recognize differences in the luxury market on the North Shore, especially as the market has heated up.

“Luxury on the lake is one market and luxury not on the lake, that’s a second market. These two are very different markets,” Radnay explains. “This is a very big thing to understand.”

Radnay says that when she looks at the luxury lakefront market this year, she sees that houses have turned on the lake, attracting significant sums. That, in turn, drives the market away from the lake upward.

Radnay points out that high water levels on Lake Michigan, which is causing stress on decks and eating into private shoreline, is also a factor in buyers looking more inland on the North Shore.

In addition to prices staying relatively flat, another unusual aspect of the current luxury market is who’s buying. Peggy Glickman, with @properties in Glencoe, says she noticed a trend when the market started to take off.

“One of the things that I noticed pretty early on that I thought was really interesting was that there were buyers looking at substantially-sized homes who weren’t even married yet and didn’t have kids,” Glickman says. “It was interesting that we had these young couples looking at these big homes on the shore.”

While the market for older homes heats up, the custom home luxury market is along for the ride. Meg Gallagher and Katie Hauser of the Meg + Katie Group, are seeing an uptick in demand for custom luxury homes in Wilmette, especially for buyers moving from Chicago who don’t want to be too from what brought them to the big city in the first place.

“We have two buyers who are moving from the city with their families due to COVID-19 and everything that’s happening,” Gallagher says. “Their intention was to move to the suburbs eventually, but it’s moved it along quicker. After looking at many houses in the $2 million range we hooked them up with a builder we work with and they are building a custom home based on their specific needs, because their work environment has changed.”

As with existing housing stock, the market for new construction luxury homes across the North Shore is tightening as well. Victoria Birov and Steven Aisen are brokers with the Newgard Team at @properties North Shore and owners and operators of Newgard Custom Homes, which builds